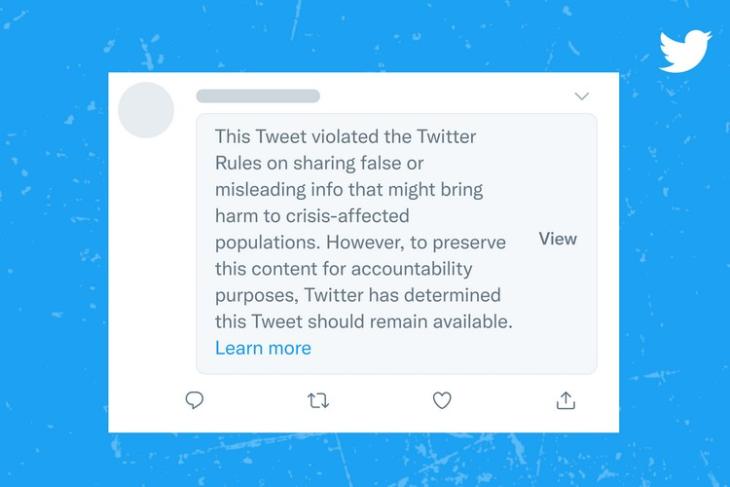 As a move to curb fake news and misinformation, Twitter has now announced a significant crisis misinformation policy for its platform. The new policy comes as a way to detect misleading tweets, containing false information, allegations, or statements, and provide a warning for them so that they aren’t circulated. Check out the details below to find out how it works.

According to Twitter, the team behind the development of the new policy has worked with various global experts and human rights organizations to develop the crisis misinformation framework since last year. Using the framework, Twitter will now verify the content of tweets from multiple credible and publicly available sources such as conflict monitoring groups, open-source investigators, humanitarian organizations, and more.

Users will only be able to view the tweet by tapping/ clicking the “View” button. Furthermore, Twitter will prevent the spread of the tweet by curbing its amplification on the platform.

As per Twitter, some examples of tweets that might come with a crisis misinformation policy warning include tweets containing false coverage or event reporting, false allegations regarding the use of force, weapons, and territorial sovereignty, and false or misleading allegations of war crimes. With this, Twitter aims to prevent mass human conflicts due to mere tweets from influential individuals or organizations, much like what it did when fake news about COVID-19 was on the rise.

So, what do you think about Twitter’s new crisis misinformation policy? Do you think it will be useful to curb the spread of misleading content on the platform? Let us know in the comments below.