We all have had that moment when we are in a club or someplace else and a song is playing which has us wrapped inside its tunes. At that point of time, everything else becomes irrelevant and all you want to do is to find out the name of that song. It might be hard to do that in the past, but since the launch of various music recognition apps, it became fairly easy. All you needed to do is launch the app on your smartphone and let it identify the song. My go-to app for this has always been TrackID.

TrackID was one of the most reliable and easy to use music identification apps out there. It not only used to let you identify songs but also play the song from right within the app using its Spotify integration. Also, you could see the whole discography of the artist with a suggestion for the best songs. You must have noticed by now that I am talking about my beloved app in the past tense. It’s because Sony has officially announced that they are killing TrackID and it won’t be available to download and use as of September 2017. So, if you are like me who is now searching for its replacement, here are the top 5 TrackID alternatives you can use:

Note: While Sony’s TrackID app was only available for Android, we are listing down alternative music identifying apps for both Android and iOS.

In my testing and usage, I have found SoundHound to be the best alternative for TrackID. First of all, this app is excellent when it comes to identifying apps. No matter how noisy the surrounding is, the app is reliable and quick to identify the song. One of the best things about the app is that it not only recognizes the song, most of the time it even gets it version right, which was just mind-blowing when it happened for the first time. I was playing a live version of the song on YouTube when trying this app, and it correctly identified the concert in which the song was recorded. From that moment, SoundHound won my heart. 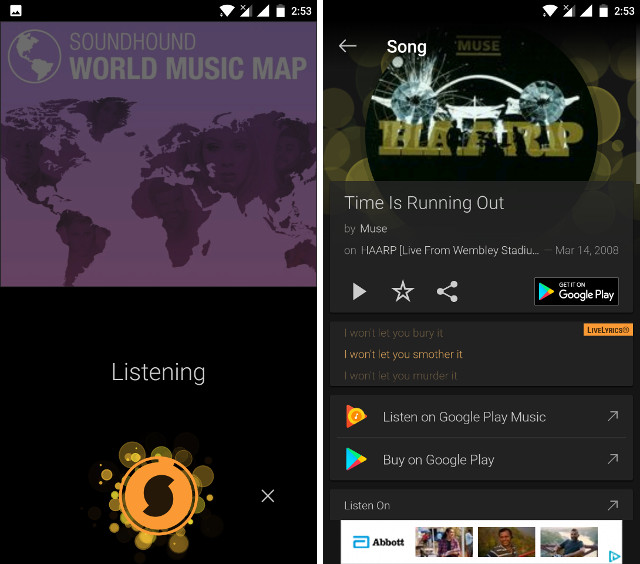 Apart from that, the app also allows you to play the song, thanks to Google Play Music integration. Just like TrackID, it shows you the whole discography of the artist with the suggestions for the best songs. The app also has a small and sweet widget, which looks just like an app icon but when you tap on the icon, it starts listening to and identifying the song. That small and innocuous widget has made its permanent residence at the centre of my home screen. It’s just so easy to use. I also love the animation which it shows while identifying the song.

About the only thing I hate about this app is the fact that it is a little bit heavy on ads. Thankfully, there’s an in-app purchase to which remove the ads. I will suggest you buy that if you use this app on a daily basis.

Shazam was one of the first apps which made music identifying apps popular. It is quick at identifying songs and gets them right almost all the time. It saves all your searches in its history tab and has a “Discover” section which lets you discover new songs based on your favourite genre and artists. You can also play the songs from within the app itself using its Google Play Music integration. Just like SoundHound, it also has a small widget which makes using the app very simple. But, I am not a fan of the colour choices of Shazam’s interface but that is a subjective thing. 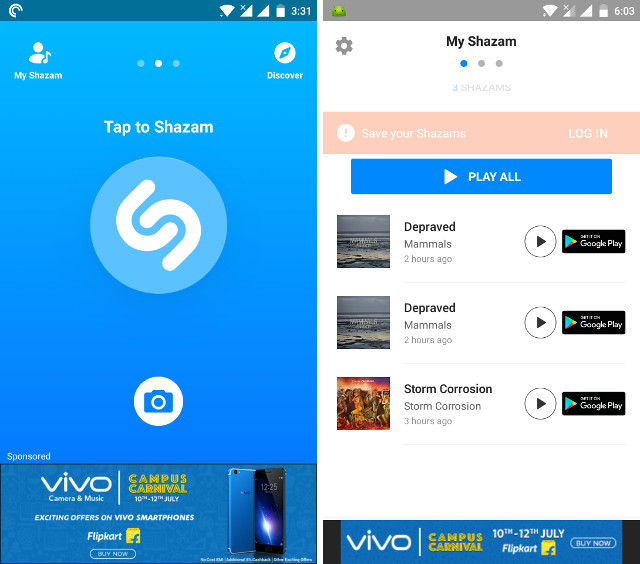 However, what is not subjective is the app load time, and Shazam takes a bit longer to load than SoundCloud. The free version of the app is riddled with ads and you will have to buy the Pro version to enjoy an ad-free experience.

If you want an app which is lightweight and simple, check out MusicID. The app has a very simple interface which follows Google’s Material Design UI language. There are no ads and the app looks very clean. There’s only a button at the bottom of the app’s window, pressing on which the app will start recognizing any music. It does take a little more to recognize a song than both Shazam and SoundHound. However, when it identifies the song, it gives you all the info about the song along with an option to buy the song from Amazon. But, its strengths end here, neither there’s no way to play the song from within the app nor there is a widget for the app. The app is best if you want to use a free music discovery app without ads. 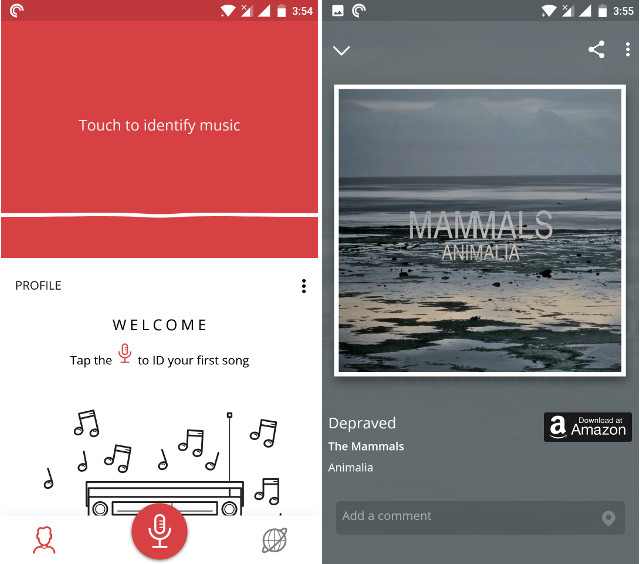 Musixmatch essentially is a music player and lyrics finder app for your Android smartphone. However, you can also use it for identifying music just like other apps on the list. The app is not as straightforward as others, as identifying music is one of the various functions it performs among others. To identify a piece of music, you have to open the hamburger menu and select the “Identify Lyrics” option. The app will then start listening to the song and identify the song along with its lyrics. However, since this is not a music identifying app per se, it is slow to use and the song identification also takes a lot more time. The app is free to use with ads with a paid monthly/yearly subscription to remove the ads. 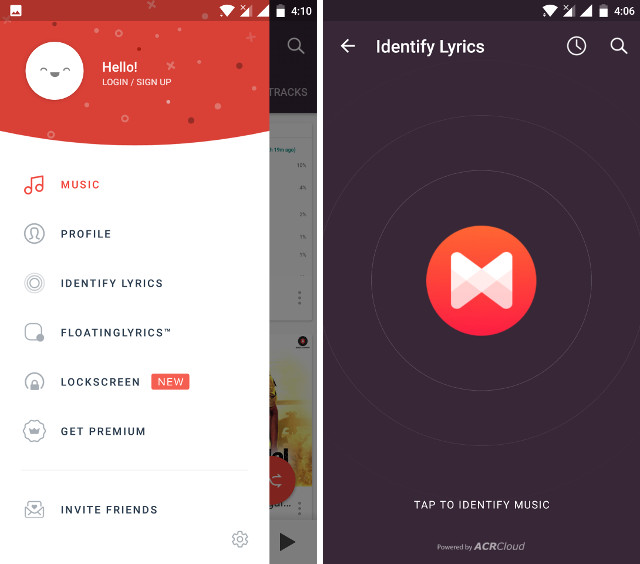 If you want an app which recognises both songs and its lyrics but is not as heavy as Musixmatch, than Genius is for you. It is a very light and easy to use app with a lower song identification time than Musixmatch. The best part about this app is that it is completely free to use without any ads. Apart from identifying music, you can also browse through the app to discover trending music around the world. It has an inbuilt YouTube player with support for picture-in-picture mode which allows you to read the lyrics even while playing the music video. All in all, it is a very good app to have if you like to read the lyrics of the song you are listening to, while also identifying music. 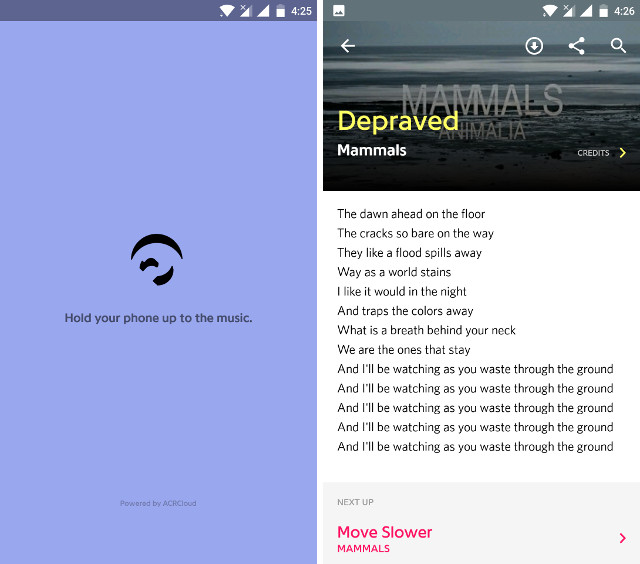 Today, every smartphone whether running on Android, iOS, macOS or, Windows comes with their own version of digital assistants. These assistants are becoming more and more capable day by day and let us carry out a variety of tasks. One of the tasks these assistants can perform is to identify music. If you don’t want to install a separate app and use the song identifying feature only once in a while, you can make do with your device’s inbuilt assistant. You just need to know the right keywords to make that happen. Let us learn those keywords, shall we?

This is an undeniable fact that Google Assistant is by far the best virtual assistant of all. It is also the quickest one when it comes to identifying songs. Just launch the Google Assistant on your Android smartphone and say, “What song is this“, “What is this song“, or “Name this song“ and it will identify the song in a few seconds. This feature also works with the older Android smartphone which is still on Google Now. However, the feature is still geo-restricted and works only in a few countries like US and Canada. 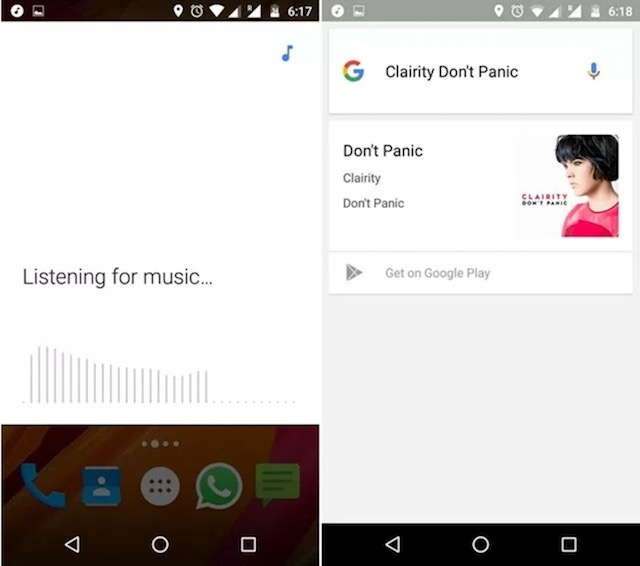 Siri might lack behind the Google Assistant when it comes to contextual aware or conversational questions but it goes head to head with it when it comes to identifying songs. Also, the feature is not geo-restricted and can be used anywhere in the world. The keyword for identifying a song with Siri is similar to that used on Google Assistant. Just say, “What song is playing right now?“, or “Name that song“, or “Which song is this?“ and Siri will identify the song for you. The feature also works on macOS version of Siri. 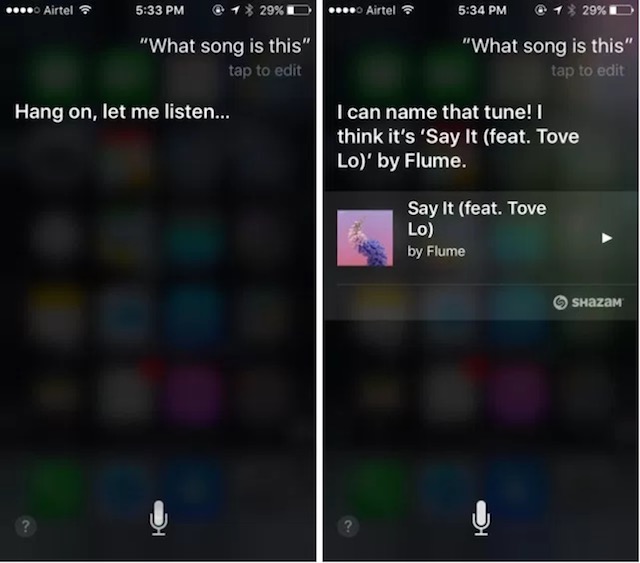 If you die hard fan of Windows Mobile and are still using a smartphone running it, you will be happy to know that Cortana does not fall behind when it comes to song recognition. Just use the keyword “What song is playing?” , or any other similar keywords and it will recognise the song for you. The feature also works on the desktop version of the app. However, you cannot use this feature on Cortana app for Android or iOS. 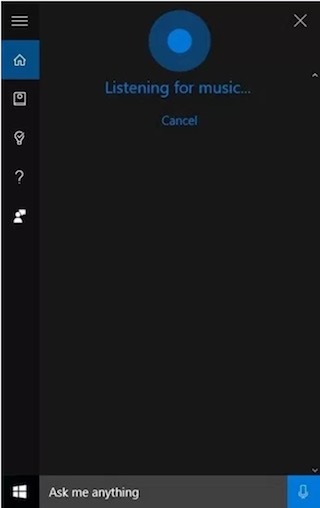 SEE ALSO: 10 Best Android Music Players You Can Use

Best TrackID Alternatives You Can Use to Identify Music

It is sad to see such a great app depart form the Play Store but such is the lifespan of apps in this digital age. You need to understand that an app might be your favourite today, but tomorrow it might not even be there. New apps always tend to replace the old one. I have accepted this fact, the only thing I wish is that the departing apps should provide a way to export you data. Sadly, there’s no such option in TrackID and you will have to manually save your song list. But, there’s no shortage of apps to replace it, and that is a good thing. Will you miss TrackID? Let us know in the comment section below and do tell us the replacement app you are going to use.