A couple of months ago, if you were to be in the market looking for a TV under 20,000 INR, you’d be compromising a lot and would have to end up settling for a small screen size at HD-Ready resolution, and absolutely no smart features. While Xiaomi’s offerings might have been the cause of a revolution in this price segment, bringing forth flagship features at attractive prices, it is TCL’s iFFALCON range that has truly set the bar high for other manufacturers out there. Their latest product, the TCL iFFALCON F2, which is available for measly Rs. 20,000, comes feature packed with a 40-inch Full HD display along with the company’s smart OS. But is the product actually as good as the company claims it to be? Let’s find out as we take an in-depth look at the TCL iFFALCON F2 40-inch Smart TV:

Before we begin, let’s take a quick look at the specs of the TCL iFFALCON F2 TV:

Now that we’ve got the specs out of the way, let’s dig into the actual review of the television.

Right off the bat, the TCL iFFALCON F2 features a slim nano bezel design that runs alongside the frame of the panel. Owing to the low price, the body includes a plastic frame, but don’t get me wrong, it still manages to give the device a pretty premium look. The design follows a minimalistic approach with minimalistic bezels. 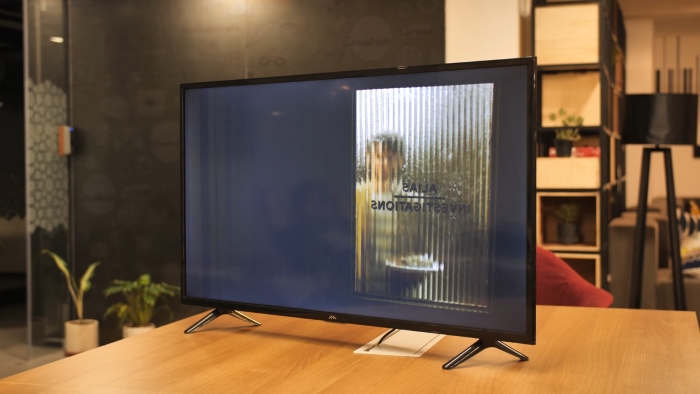 While one might argue that a silver-tone or a metallic finish bezel might have been more appealing, it is practically nitpicking, and the TV looks just as good and premium with the standard plastic black nano bezels. 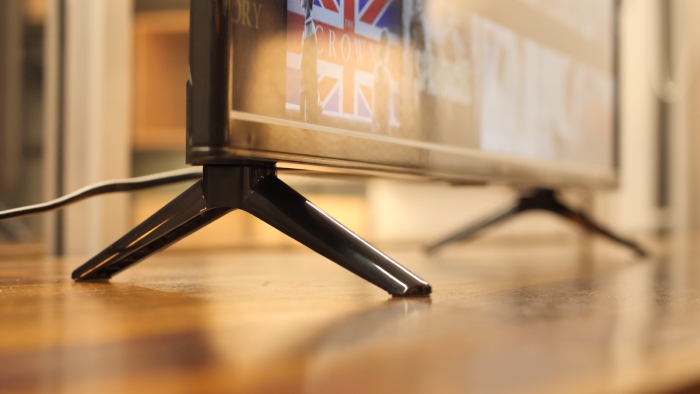 The bundled stand is something I personally didn’t really approve of. Made out of cheap plastic, the stand, despite being sturdy enough to hold the TV, does look pretty cheap. Thankfully though, it does its job quite well, and thanks to the huge size of the display, you’d barely even see the stand.

All in all, the build quality of the TCL iFFALCON F2 is pretty darn good. It follows the current market trend of offering a nearly bezel-less design and manages to do it while looking quite premium.

Connectivity is a major area of concern for most users out there, and TCL understands that. In fact, the TCL iFFALCON K2A is one of the rare few television sets out there to offer practically every port one would expect from their display unit, and that too, in abundance.

The right side of the device houses the point for the AC adapter to be connected. Apart from that, there isn’t anything else on the right-hand side of the TV. 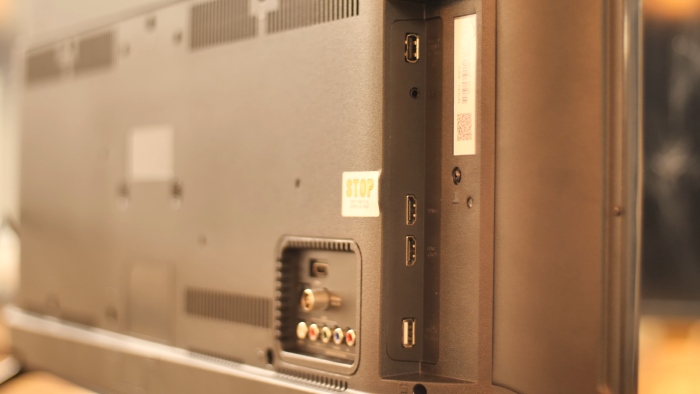 Talking about the left side, the TCL iFFALCON F2 has kept its design language pretty similar to its other offerings. It has a USB 2.0 port, followed by a 3.5mm headphone jack, two HDMI ports, and finally a USB 3.0 port. The HDMI 2 port supports ARC, that is, Audio Return Channel. This can be used to hook up your home theater system or sound system as an alternative to the TV’s inbuilt speakers. 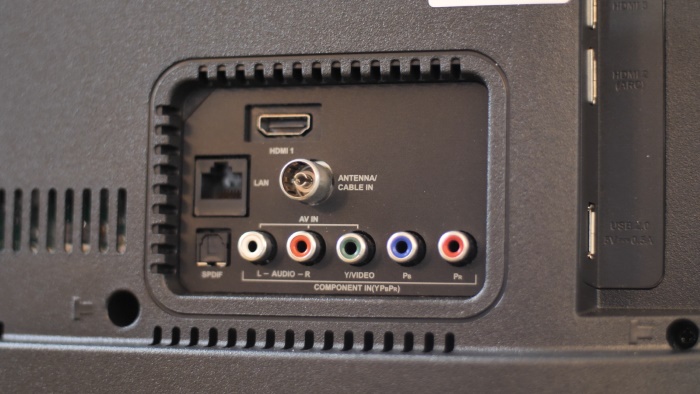 While these ports should be enough for most users, TCL has made sure not to miss out on anything. The  TCL iFFALCON F2 has a compartment on the rear side as well, which houses a plethora of ports, namely, 1 more HDMI port, a LAN port, a cable/antenna port, and the various component and A/V ports. It also features a SPDIF port that can be used to transmit digital audio.

As far as connectivity is concerned, the TCL iFFALCON F2 puts most competing TVs to shame by offering just about every port that a consumer might demand, and then some.

For me, the picture quality on a television set is probably the most important point of judgment. I mean, you can always get a soundbar if the sound is low, and you can always get attachments for making your TV smarter, but the display is the main thing on a TV. Thankfully, TCL understands the importance of the display and has included a great panel for your viewing. 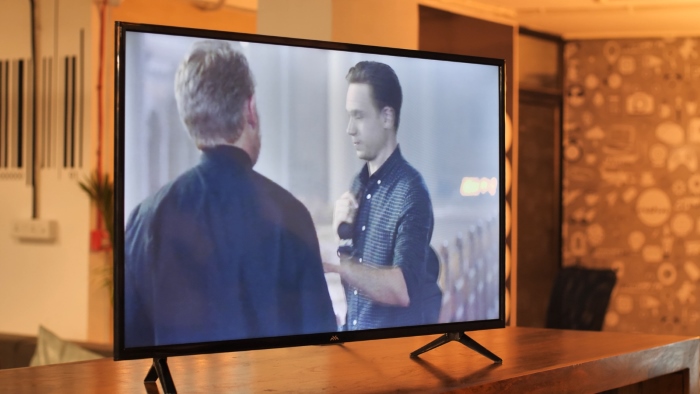 Competing with the other HD ready displays, the TCL iFFALCON F2 offers a Full HD display with a resolution of 1920x1080p. The pictures on the display are sharp and detailed while boasting of a high color gamut. The color reproduction is great, and the refresh rate of 60Hz ensures smooth playback of videos.

The spec sheet of the TCL iFFALCON F2 reads out a LED panel, thanks to which the blacks look really deep. Additionally, the TV also offers a whopping high native contrast ratio of 6000:1, which sets it a class apart, and allows it to compete with TVs way ahead of its price bracket. 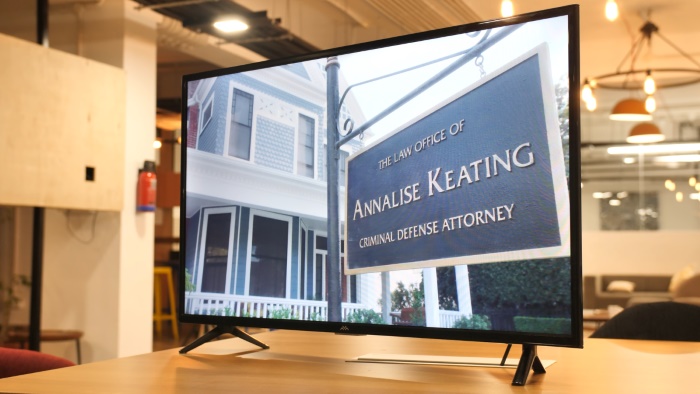 A 40-inch display would probably fit nicely in your living room, for the whole family to watch. As such, the 178-degree viewing angle on the display should allow everyone to easily enjoy the content while sitting in any corner of the room. In my opinion, the picture quality on the iFFALCON F2 is pretty darn good and competes with the best in the business.

While most televisions in this price range are usually good for average use, the F2 can be used for watching movies and playing games all alike without the user worrying about any lack of quality.

My, oh my, was this the biggest shocker of the iFFALCON F2. Okay, so the device packs in a 16W speaker, which should be just enough, right? But man, is this thing a sound monster or what!? I’ve never used a TV before that was as loud as the F2, especially in this price bracket.

Working with Beebom has allowed me to feast my eyes and ears with a plethora of TVs, but the major let down has always been the sound department. The audio is either too cranky or too loud with imbalanced levels. But then came the iFFALCON F2, and boy, do I love the speakers on this thing. 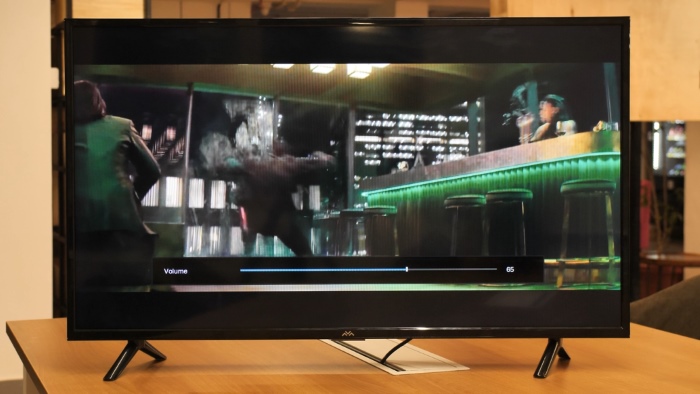 The speakers on the F2 are loud enough to easily cover every corner of your room, without any loss in quality. The TV also features just the right balance of Total Harmonic Distortion (THD), which provides a great level of balance between the sound levels. Highs, lows, and even the mids – all sound great on the TV. The only slight complaint some might have is that the volume gets a bit too cranky at levels higher than 80%, but I reckon anyone would actually have to push things that far.

While budget TVs almost come with an invisible sticker saying “External sound system needed”, the iFFALCON F2 should prove to be enough for the majority of users out there.

Unlike other TVs in this same price range, the iFFALCON is indeed a smart TV. Now, while it doesn’t come with support for Android TV (or any Android apps for that matter) as one would expect, it does pack in the iFFALCONE Launcher, which should be pretty good for most users. 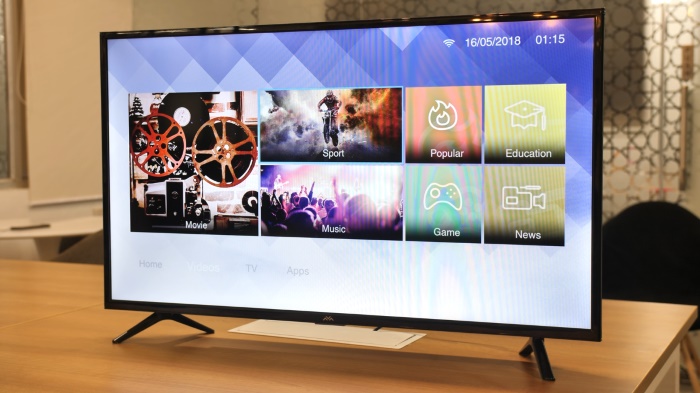 For most users, the point of Smart TV is to watch content from live streaming services such as YouTube and Netflix and browse content on the web using their TV. Well, if that’s what you’re looking for, the iFFALCON F2 should satisfy your needs, since it comes with dedicated apps for YouTube and Netflix pre-installed. Heck, the remote even has a dedicated Netflix button for easy access to streaming giant’s services. Additionally, the iFFALCON F2 also comes with support for T-Cast, which allows you to use your smartphone as a remote for the television, a feature that some users might fancy. 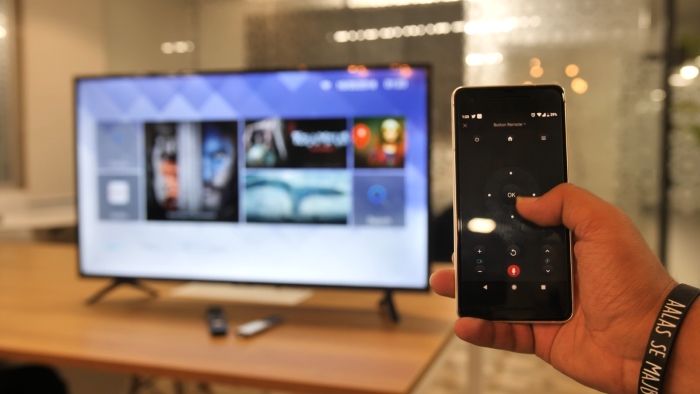 Now, I won’t go as far as to compare it with Android TV, since Google’s OS is light years ahead of the iFFALCONE Launcher. That being said, the Smart OS on the iFFALCON F2 should be enough for most users, and puts it right in line with the Xioami Mi TV 4A, a device that stays in the same price bracket, and similar to the F2, doesn’t support Android TV or Android Apps.

So, now that we’ve covered all the specs and smart features, it’s time to see how the iFFALCON F2 fares up in real-world tests. If I had to describe the performance of the TV in a couple of words, I’d say that it performs way better than how you’d expect it to.

The overall video performance of the iFFALCON F2 is absolutely great and more than justifies its price tag. In fact, the picture quality is so good, that when you turn off the lights and just concentrate on the display panel, you won’t be able to differentiate the iFFALCON F2 from a television double its price. 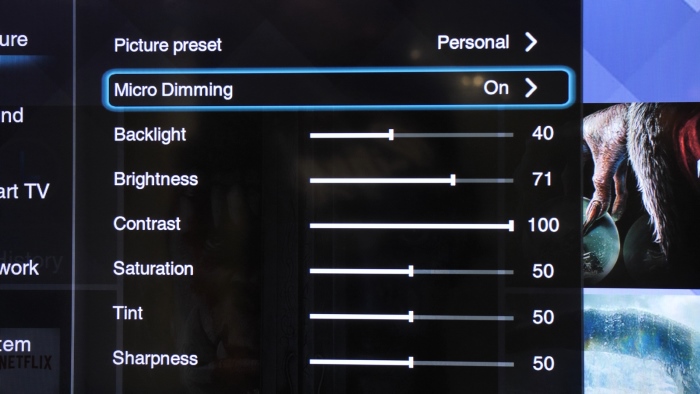 While the TV doesn’t have support for 4K or HDR, both our PS4 Pro and Xbox One X gaming consoles ran pretty well on the TV. The colors looked great, and the 60Hz refresh rate ensured that we were able to game without encountering any frame drops. Additionally, the Micro Dimming feature works pretty well too. 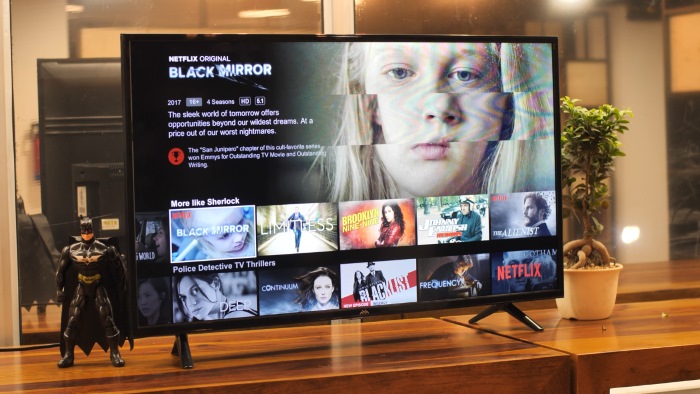 Even the Smart Features on the TV are a treat to use. Having tried Xioami’s Patchwall OS, I can definitely feel the experience is a lot smoother on the iFFALCON F2. Yes, Patchwall is still quite advanced as compared to the iFFALCONE Launcher, but then again, for most users, the barebones ideology of the iFFALCONE should be more than sufficient.

TCL iFFALCON F2: Worth It?

Available at a price tag of just 20K, the TCL iFFALCON F2 is an absolute steal. Going up against the Mi TV 4A, the iFFALCON F2 might be a couple of inches smaller, but it does seem to offer great value for money. It comes equipped with all the bells and whistles and manages to compete with the big dogs in the market. The lack of Android TV might be a deal breaker for some, but hey, it supports a majority of TV-oriented apps like YouTube and Netflix, so you won’t be missing out on a lot at the end of the day. 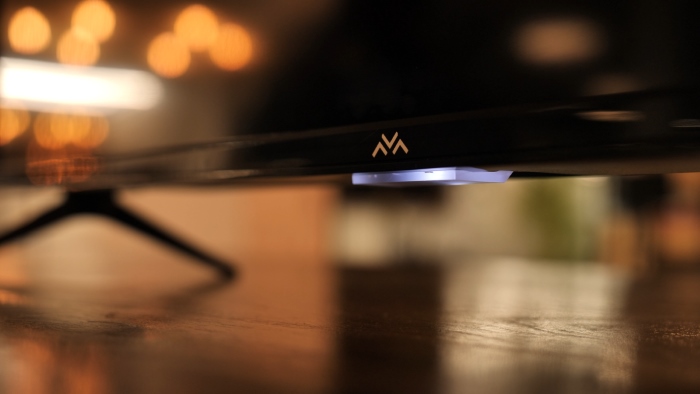 All things considered, the TCL iFFALCON F2 offers a complete package. The huge 40-inch display offers great picture quality coupled with an immersive sound experience. The lack of Android TV is easily compensated by the bundled iFFALCONE launcher, which should satisfy the needs of most users. In my opinion, the F2 manages to check all the boxes and offers a plethora of features for a very low price tag.