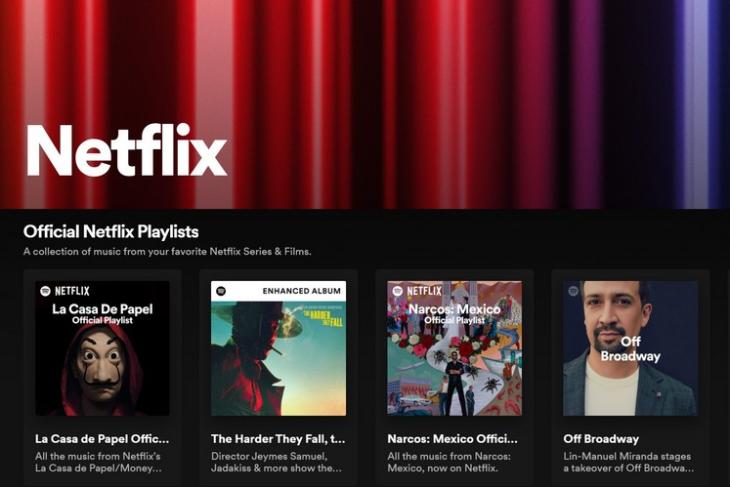 Have you ever loved a soundtrack in a Netflix series so much that you instantly went on to find the original song on your favorite music streaming platform? Well, if you did, I’m sure you would be happy to hear that Spotify has now made it much easier to find a song you heard in a Netflix series, thanks to the new “Netflix Hub” on the platform.

The music streaming giant recently added a new section to its platform that contains all of Netflix’s soundtracks, playlists, and podcasts. Dubbed as the Netflix Hub, it is a dedicated section for any Netflix-related audio content. Although most of the tracks, which are there in popular Netflix series and movies, were already available on Spotify, the Netflix Hub brings all of them in a single place.

Spotify did the same for Disney content on its platform back in 2019. Now, citing the popularity of Netflix and its content, the music streaming giant aims to provide users a central hub to find every Netflix-related audio track, podcast, and playlist.

What’s There in the Netflix Hub on Spotify?

Now, coming to the content in the Netflix Hub on Spotify, there are currently three separate categories for Official Netflix Playlists, Netflix Soundtrack Albums, and Netflix Podcasts. Each section showcases some of the content up-front for users to browse through. However, users can tap/ click the “See All” button to explore more content.

The Netflix Soundtrack Albums section, on the other hand, contains every featured soundtrack release from Netflix movies and TV shows like Red Notice, Cowboy Bebop, Squid Game, The Crown, and more. As for the Netflix Podcasts section, it contains all the Netflix-related podcasts like Okay, Now Listen, Netflix is a Daily Joke, 10/10 (Would Recommend), You Can’t Make This Up, and a few others.

So, if you are a Netflix buff looking to satiate your thirst for good music and audio content, you should go to the Netflix Hub on Spotify right now.

The music streaming platform is expected to add more soundtracks, albums, playlists, and podcasts to the hub as they continue to release. For now, you can chill out with some tunes from the La Casa de Papel playlist or dive into a podcast about the popular Netflix series, The Crown, on Spotify.