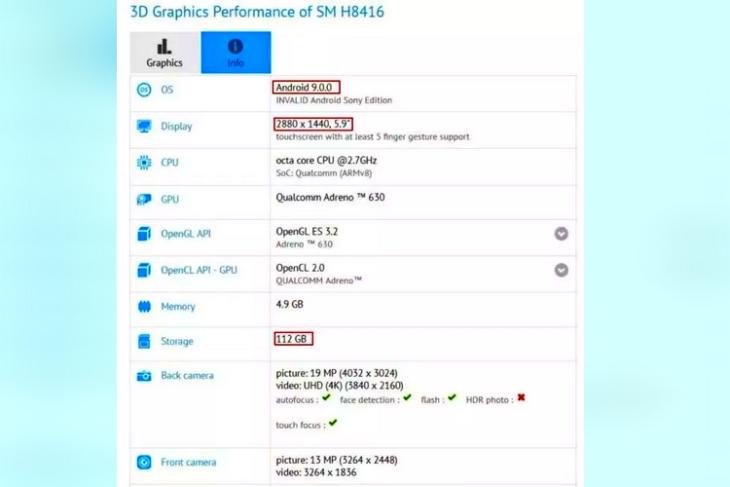 We know the Sony Xperia XZ3 is just around the corner, and it was recently spotted on the GFXBench database flaunting high-end specs and running Android P. The Sony device, carrying the model no. SM H8416 was listed on the benchmarking site’s database which revealed key specs of the Xperia XZ3, and they sure scream flagship.

As per a screenshot of the Xperia XZ3’s specification sheet on GFXBench’s database, the device is powered by an unnamed Qualcomm Snapdragon processor clocked at 2.7GHz, paired with an Adreno 630 GPU. Now, the Adreno 630 is the GPU that powers the Snapdragon 845, which makes it clear that the Xperia XZ3 will feature Qualcomm’s top-of-the-line processor.

As per the benchmark listing, the Xperia XZ3 packs 6GB of RAM alongside 128GB of internal storage, and features a 5.9-inch QHD+ display with a resolution of 2880 x 1440 and support for multi-finger gestures. The database shows a single 19MP rear camera capable of recording 4K videos, however previous leaks have revealed that the Xperia XZ3 will come equipped with a dual rear camera setup comprising of a 19MP primary sensor and a 12MP secondary sensor like the XZ2 Premium. Also, the benchmark listing states that the Xperia XZ3 boots Android P, which contradicts with previous leaks which claim that the flagship device will run Android 8.1 Oreo out of the box.

Earlier this month, the complete specifications sheet of the device was leaked which revealed that the Xperia XZ3 will also have support for Quick Charge 3.0 technology. A few days later, a trio of hands-on images of the Xperia XZ3 also appeared online, revealing a dual-glass design with a curved back similar to the Xperia XZ2. The Xperia XZ3 will reportedly be unveiled at IFA next year, however, Sony is yet to make an official announcement.