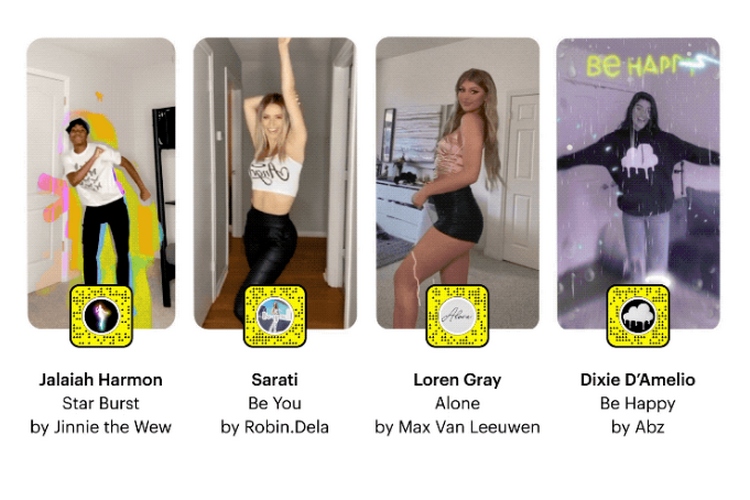 Snapchat is apparently testing a new strategy to co-exist with TikTok. The company is leveraging its expertise in Augmented Reality to release four new lenses that replicate viral TikTok dance challenges. To make this a reality, the company partnered with four TikTok personalities, or as Snapchat calls them, ‘Snap Stars’.

The four lenses in question are Star Burst by Jalaiah Harmon and Jye Trudinger, Be you by Sarati and Robin Delaporte, Alone by Loren Grey and Max van Leeuwen, and Be Happy by Dixie D’Amelio and Abbas Sajad. Also, you can create your own lenses via Snapchat’s Lens Studio.

These lenses are made possible with Snapchat’s 2D full body tracking, which lets users create lenses that move with their entire body. To be specific, this feature supports 18 joints and trigger effects based on body movements.

With this move, Snapchat aims to position itself as a creative tool rather than a messaging platform. However, Snapchat doesn’t offer a dedicated music library yet. The company is planning to add featured sounds this fall for users in New Zealand and Australia.

Snapchat’s new approach has one major hurdle – staying relevant. TikTok’s dance challenges are usually fast-paced and tend to get outdated by the next big trend in weeks. It will be interesting to see if TikTok creators start using Snapchat’s Lens Studio to develop lenses for emerging TikTok trends.

Meanwhile, Facebook-owned Instagram is continuing its efforts to become the next TikTok. The company brought the feature to India last month and expanded it to over 50 countries earlier this month. Instagram is also testing the possibility of shifting the Search button from the bottom navigation bar to offer a dedicated Reels button.

Snapchat Now Lets You Add Music to Your Snaps on iOS