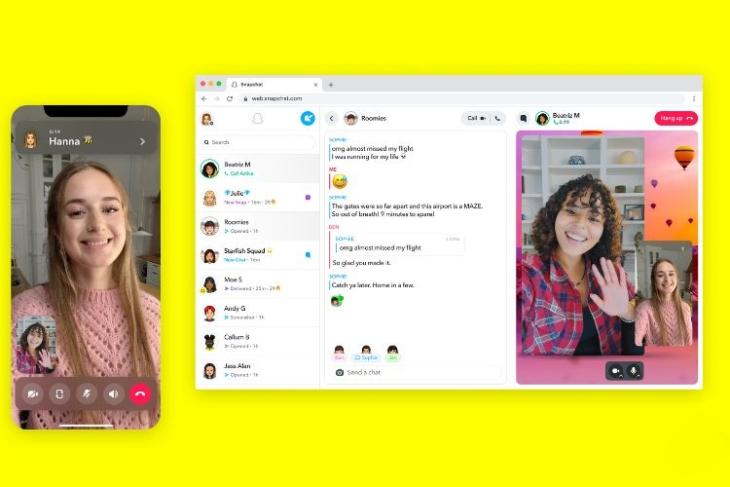 Snapchat has expanded its capabilities and now allows you to have conversations on the web, be it through messages or via calls. Snapchat for Web offers a similar experience, which is provided by WhatsApp, thus, aiming to become a direct contender. Here’s a look at the details.

Snapchat Can Now Be Used on the Web

Snap Inc has revealed that you can now have video/audio calls via your PC on Snapchat (only via Google Chrome, though) and even continue a chat, which was left off on Snapchat’s mobile versions. You will also be able to send Snaps, which has been the primary focus of the photo-sharing app ever since its inception. This can be done by visiting web.snapchat.com.

Snapchat, via a blog post, says, “With more than 100 million Snapchatters using our voice and video calling each month on average, we’re excited to offer a new way for our community to keep conversations going on their computers, where they’re already working, learning, and browsing.“

Its web version will also support chat features like Chat Reactions and Chat Reply. And the popular AR Lenses, which are a signature thing for Snapchat, will soon be available on the web too.

However, there’s one tricky condition. This functionality will be available to those who subscribe to Snapchat+, its recently introduced paid tier. This subscription model will provide you with exclusive features like the ability to pin best friends, the ability to view how many times a Story has been rewatched, and more. To know all about Snapchat+, you can head over here.

Another thing to note is that Snapchat for Web is available in the United States, the United Kingdom, Canada, Australia, and New Zealand. We are not sure when this will arrive in more regions and if this will always remain a paid thing.

That said, it appears like the Snapchat+ subscription service is a serious venture to compete with the likes of Telegram Premium and even WhatsApp Premium and we are hoping to get more updates on this in the near future. It remains to be seen how this paid tier fares and whether or not it is able to engage its 332 million daily active users, or at least a few of them!

So, will you subscribe to Snapchat+ for its web version? Let us know your thoughts in the comments below.