Skip to content
Home News Snapchat’s Android Redesign Spotted in Alpha; Can Be Enabled via Root 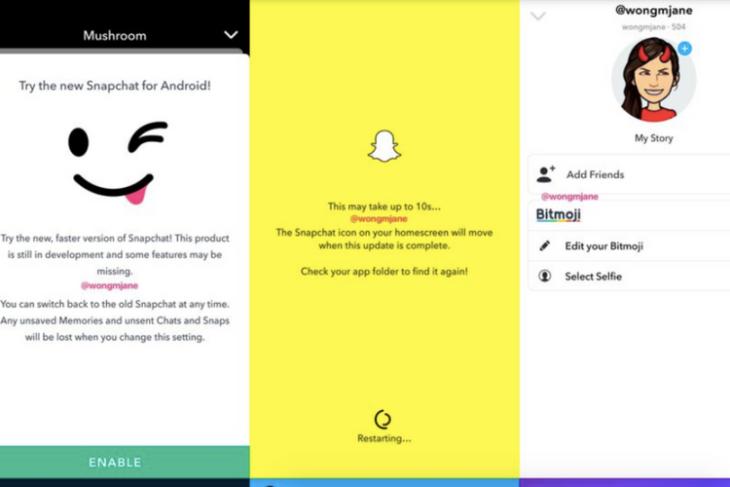 Snapchat’s Android app has long been criticized for being sluggish and limping behind in the experience department when compared to iOS. The company had, hence, promised a much-needed redesign for Android last year and we have now gotten our first look at the new cleaner, faster Snapchat UI.

Discovered by popular app researcher Jane Manchun Wong, an Alpha build of Snapchat sporting the new design was found hidden in the latest Android app (version 10.39 or 10.39.1 beta). The redesign, as seen underneath, does come with a number of new visual changes that aren’t much prominent but fall in line with the Snapchat iOS app.

But, the primary focus of the new app is on performance and it has been described, both by Jane Wong and XDA Developers, that Snapchat’s alpha build is ‘noticeably faster and cleaner’ as compared to the existing Android app. The whole UI is now a little more rounded and white aesthetics take the reign.

Snapchat's new faster Android UI is underway. It's generally smoother than the old one. Emoji brush is coming to the new UI for Android too! pic.twitter.com/wjGhM52Wmg

The app is no longer choppy and performs well, but a lot of features such as Snapcodes, messaging, camera app still captures screenshots over direct photos, and other controls are missing in the settings. You can check out the video attached below to see how the new app performs.

If you are eager to try out Snapchat’s alpha build, which is quite rough-around-the-edges, XDA Developers has enabled it and described the method for you to do so right here. You will need to have root access and know your way around config files and ADB to get an alpha up and running on your Android smartphone.

However, the alpha build of this ephemeral messaging app is still under development and you can certainly expect a ton of bugs, missing features, and app crashes on the regular. We would recommend you to stick to the stable app and not upgrade to the alpha build if you’re a regular Snapchat user.

There’s currently no mention on when this redesign will go live, but are you excited to try out the same on your Android device? What do you think of this redesign? Let us know in the comments down below.