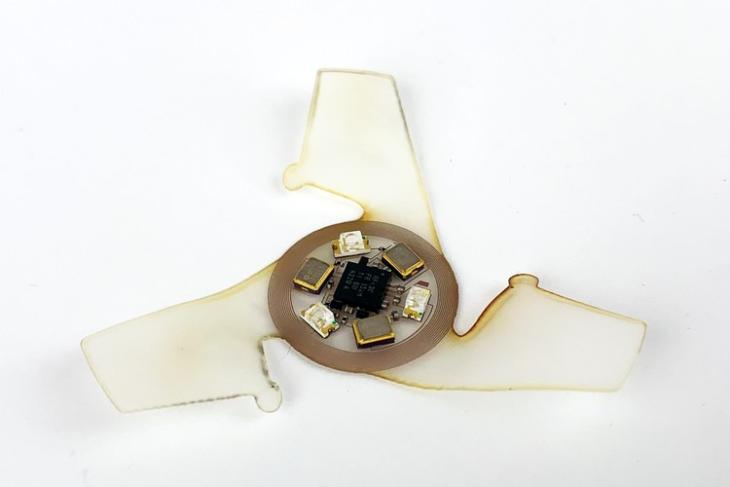 A team of researchers and materials scientists from Northwestern University has developed microelectronic fliers that can collect environmental data. The size of the tiny fliers range from 40mm 9being the largest) to 0.4mm (being the smallest), and can collect various kinds of environmental data as they eventually fall to the ground.

The researchers took inspiration from the falling seeds of various plants and how they glide through the air. The team studied the aerodynamics of the seeds and designed a battery-less flight mechanism that enables the tiny electronic fliers to remain in the air for as long as possible. During their time in the air, they can collect various kinds of environmental data for researchers and scientists for further analysis.

The scientists developed different kinds of prototypes of the tiny fliers. The best design that they were able to come up with can fall at a speed of 28 cm/sec. This is much less in comparison with a snowflake that falls at an average speed of 250 cm/sec. Hence, the fliers can remain in the air for a longer time to collect as much data as possible before they fall to the ground.

“It was surprising we could do better than seeds in terms of flight dynamics,” John Rogers, a professor of Materials Science at the Northwestern University told Verge.

Rogers and his team developed the electronic micro-fliers to collect various kinds of data. For instance, the 40mm units come with battery-free electronics for monitoring solar light exposure, while the smaller models are made with special materials with color-changing capabilities when in contact with specific environmental particles such as lead or mercury. Moreover, the larger units can also pack antennas, with the help of which they can remotely send the collected data to a home receiver.

So, as they can collect important environmental data by leveraging their unique properties and building materials, the scientists think that these should be perfect for environmental monitoring in the future. The team proposes that these electronic fliers can be dispersed in the air from an airplane or a drone and collect the data of an environment as they fall to the ground.

However, a senior pollution techniques scientist at the Norwegian Institute of Air Research (NILU), Núria Castell has questioned the practical, economical, and environmental aspects of the technology. She says that despite the fliers’ unique capabilities, the size can become insufficient for collecting huge amounts of data at a time. Moreover, she says that the fliers would have to be dispersed again and again to collect data for longer periods.

Now, although Castell is not wrong, it is worth mentioning that the tiny electronic fliers are currently at their initial stage. So, the team of scientists should be able to improve their designs to fit more sensors and equipment for collecting more data. Furthermore, Rogers says that the devices have only been tested in controlled environments in labs.

“It’s still early days. But at the same time, we’ve thought pretty deeply about which ideas scale and which don’t, and we’ve focused on concepts that can be scaled and ideas that are practically relevant. We’ll be looking for partnerships to take the technology out of the lab.” Rogers further added.