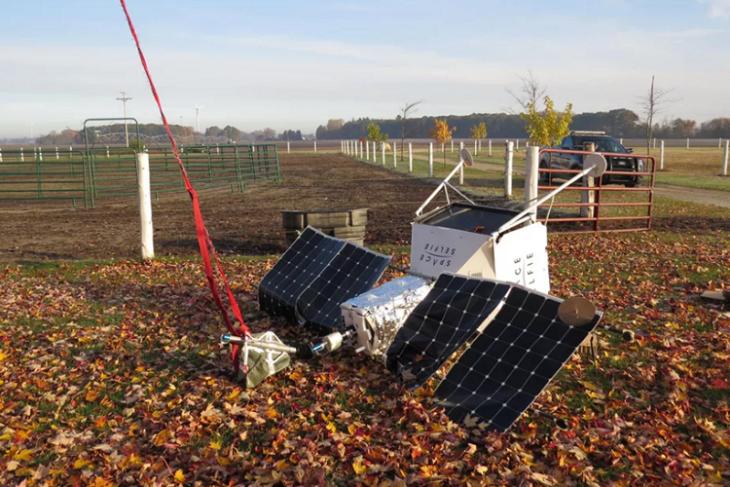 Samsung recently launched its grand “SpaceSelfie” program that involved sending selfies to space on a Galaxy S10. The South Korean smartphone giant sent the selfie of actress Cara Delevingne making it the world’s first “SpaceSelfie”. However, things went sideways after the device used by Samsung to launch the smartphone into space got a crash landing near a farmland home in Michigan.

Nancy Mumby-Welke of Gratiot County, Michigan reportedly heard a loud noise outside the farmland home and saw an unusual object in her backyard. “Unbelievable look what just fell out of the sky and 911 is baffled and it’s caught up in our tree,” posted Nancy on Facebook.

“We realized it had fallen from the sky. It looked like a satellite.”, she told NBC News. Luckily, there were no injuries or casualties in the incident. The remains got collected by Raven Industries, a high-altitude balloon manufacturer Raven Industries that worked with Samsung in this campaign.

A #satellite used in a publicity event two days ago in London fell from the sky in Michigan!!!! No one was injured and Nancy said lights were still blinking when she found it! #TheSkyIsFalling #LookUp @Samsung @wzzm13 #SpaceSelfie https://t.co/NBtxXuyNlP
📱: Nancy Mumby-Welke pic.twitter.com/q4gmGGujpB

“Samsung Europe’s SpaceSelfie came back down to Earth. During this planned descent of the balloon to land in the US, weather conditions resulted in an early soft landing in a selected rural area.”, Samsung told NBC News.

In case you’re not aware, Samsung wants users to submit their selfies to Samsung’s ‘Mission Control’ website to stand a chance to be featured in the space selfie program. The images will be chosen randomly and will be sent back to the original person with planet earth as the backdrop.

“Our relentless pioneering spirit continues to show that amazing things happen on Samsung screens – even from the stratosphere. Our ethos is Do What You Can’t and the Samsung SpaceSelfie is just that. We continually break the boundaries of what is possible with innovation and tonight’s SpaceSelfie launch is no different.”, told Benjamin Braun, Chief Marketing Officer, Samsung Europe in the Space Selfie event.

While climatic conditions caused this crash-landing to happen, we’re glad it didn’t cause potential damage to life and property. So, did you take part in Samsung‘s SpaceSelfie program? Tell us in the comments.