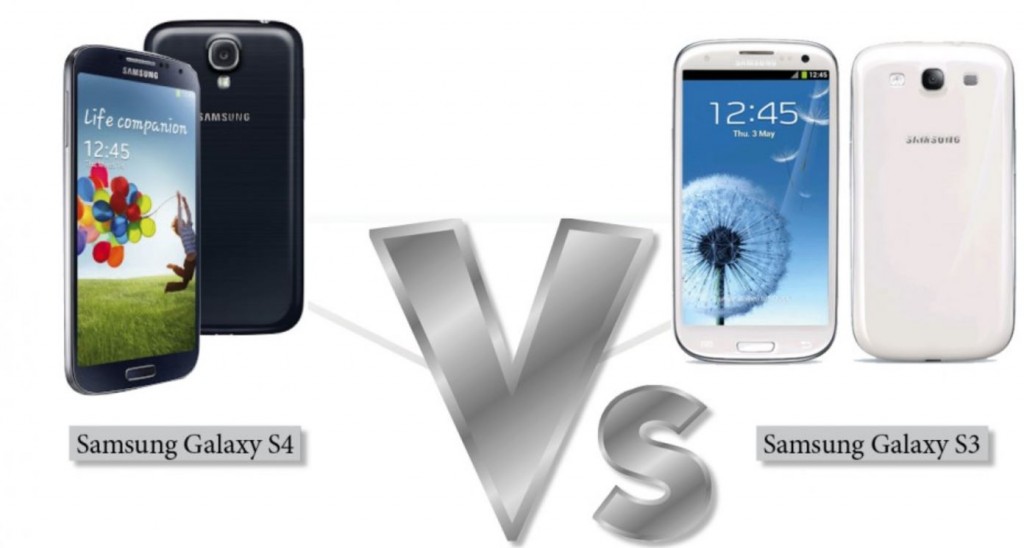 Samsung Galaxy series has been the most successful smartphone series for Samsung. Samsung, when launched the Galaxy S3, it set the benchmark for other companies and helped Samsung dominate the mobile handset market. Samsung launched Galaxy S3 with best hardware specifications and nice software tweaks which helped Samsung dominate the smartphone market.

In 2012 with Galaxy S3 Samsung over shadowed the legacy of Apple, this was the first time Apple felt the heat and Samsung cheered the success of Galaxy S3. But Samsung has bigger dreams this year and with the launch of brand new Galaxy S4, it is clear that Samsung will not let it go easily to any of its rival.

Galaxy S4 is a massive 5 inch handset with some break through hardware features (except the old plastic design). In software department, Samsung has nailed it by giving some features that allows you to control many features without even touching your device.

Here is a detailed comparison of what Samsung has improved in S4 when we compare it with S3.

Samsung galaxy S4 comes with the plastic body with some noticeable difference over its predecessor like the metallic banding and texture to make the phone look premium.  The phone is bigger, thinner and lighter having dimension 136.1 X 69.8 X 7.9 mm and weighing 130 grams.

Samsung galaxy S3 has a 1.4 GHz quad-core cortex A9 processor with Exynos 4412 chipset and  Mali 400MP GPU for graphics performance. The phone supports all the basic sensors like accelerometer, gyro, proximity, compass, and barometer.

Samsung galaxy S4 comes with 2 variants one for the LTE networks powered by 1.9 GHz quad-core snapdragon 600 processor and Adreno 320 GPU.

For the rest of the world S4 will come with octa core (Quad-core 1.6 GHz Cortex-A15 & quad-core 1.2 GHz Cortex-A7) Exynos 5 Octa 5410 processor with PowerVR SGX 544MP3 GPU. Samsung has added 2 new sensors,  humidity sensor and gesture sensor. The screen supports floating touch identical to what we have seen on Note 2.

Samsung galaxy S3 has a 4.8 inch screen based on Super AMOLED plus technology with screen resolution of 1280 X 720 and 306 ppi. The screen supports 10 point multi-touch along with Corning gorilla glass 2 for protection against scratches.

Samsung galaxy S4 has a 5 inch 1920 X 1280 FULL HD display with 441 ppi based on Super AMOLED plus technology. It supports 10 point multi-touch and comes with Corning Gorilla glass 3 screen protection.

Samsung galaxy S3 has 1GB RAM and 16GB internal storage which is expandable up to 64GB via micro SD card.

Galaxy S4 has a massive 13MP rear camera with LED flash and front 2 MP camera, both can shoot at 1080p full HD at 30fps and can capture photos, videos from both the camera simultaneously.

Galaxy s3 comes out of the box with android 4.0 ICS and is upgradable to android 5.0. Jellybean (update is already available via OTA or kies air.)

Some unique features are

Galaxy S4 comes out of the box with android 4.2 jellybean and will readily receive android 5.0 in near future. Some unique features are

Galaxy S4 has a 2600 mAh removable battery which means bigger battery and more standby and talk time over 3G, but official data is not available.

Galaxy S3 is available at 29000 INR or 530 USD for SIM free unlocked version in various countries.

Galaxy S4 will launch with a price tag of around 700 USD or 38000 INR for SIM free unlocked version but still official pricing may vary in different countries from april 2013.

Microsoft Rolls out Windows 11 Build 22151 to the Dev Channel