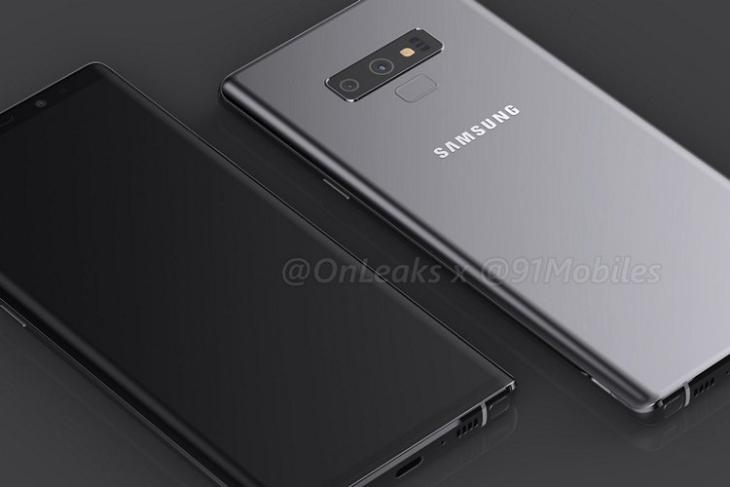 Samsung’s next-gen flagship phablet, the Galaxy Note 9, is all set to launch later this year, and multiple rumors over the past few weeks have seemingly revealed quite a few of its hardware specs and software features. Now, a short video, based on leaked high-res CAD renders, seems to corroborate earlier rumors that it won’t look significantly different from its predecessor.

The video, uploaded to YouTube by 91Mobile, is based on 3D renders that noted tipster @Onleaks managed to get his hands on. The video seems to show that the device will carry forward the same design language seen earlier in devices like the Galaxy S9 Plus with a curved 6.3-inch Infinity Display up front, and a dual-camera setup (with an accompanying flash) at the back.

Interestingly, the renders show a dual-camera module on the Galaxy Note 9. The Note 8 also comes with a horizontally arranged rear-camera module, but this one definitely looks less cumbersome with the fingerprint scanner moving below the camera module. The video also claims that the device will have a 3.5mm port for audio playback and a USB-C port for charging and data-syncing. It will apparently measure 161.9mm in length, 76.3mm in width and 8.8mm in thickness.

Other specs are not confirmed by the latest leak, but earlier rumors suggested that the handset will have an 18.5:9 screen with a QHD+ resolution, and will be powered by an Exynos 9810 or Snapdragon 845 SoC, depending upon the region. The device is also expected to ship with 6 gigs of RAM and up to 256GB storage, and carry a 3,850mAh battery.

While latest rumors suggest that the Galaxy Note 9 will be launched on August 9, earlier rumors claimed that the launch of the Galaxy Note 9 may be delayed by a couple of weeks following a last-minute design change ordered by the company’s vice chairman, Lee Jae-yong. It will be interesting to see when the device finally launches, but either way, it will definitely be one of the devices to watch out for in the second half of this year.