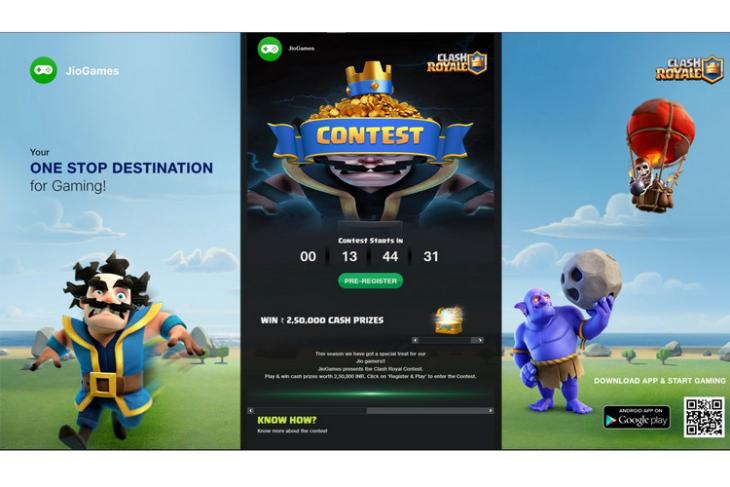 Reliance Jio‘s gaming division, JioGames, has teamed-up with developer Supercell to organize a nearly month-long Clash Royale tournament for India. According to the press release, the event will run from November 28 to December 25, with the winners eligible for cash prizes and the title of ‘India ka Gaming Champion’ (India’s Gaming Champion). The total prize money on offer is Rs. 2.5 lakh, including the final payout and weekly giveaways.

As for the format of the game, participants will be pitted against one another in 1-on-1 matchups, and will need to win their bouts to qualify for the next round as they move towards the finale. The Qualifiers, which will be open to all, will last from November 28 to December 19, followed by the tournament proper, which will start December 21st. The finals will be held on December 25. The semi-finals and the finals will be streamed on JioTV.

Registration is free and remain open until December 19. Both Jio and non-Jio users are eligible to take part. The contest starts at midnight (IST) tonight and you can sign-up for the tournament after checking out the rules and regulations on the official JioGames website.

For those unaware, Clash Royale is a popular freemium real-time multiplayer strategy game that takes place in the ‘Clash of Clans’ universe. It is free-to-play for casual gamers, but offers in-app purchases for added advantage. Available on both iOS and Android, it requires players to build their village using resources gained from attacking other players. Groups of up to 50 people can join-up to create ‘Clans’ that can then fight against rival clans.