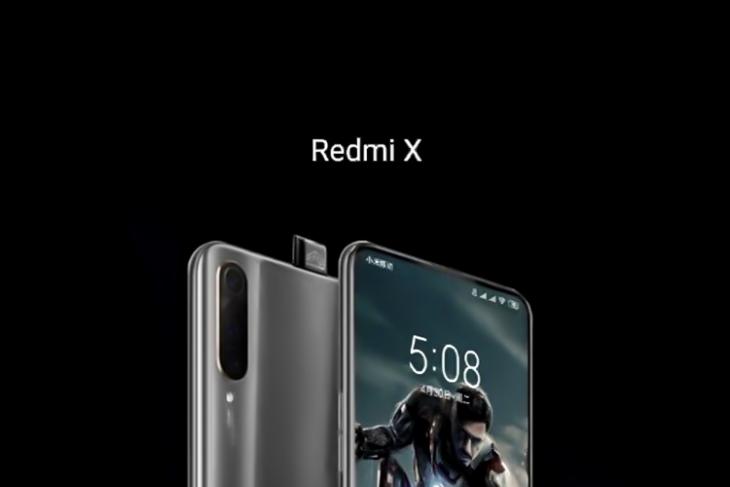 Update: In a haste and moment of excitement, we brought you a first look at the Redmi X as spotted in the teaser poster posted on Weibo. However, we had still been searching for a source for this leaked poster when we came to the realization that the Redmi X shown in the teaser has been photoshopped and is fake.

Someone has slapped the pop-up camera from the first-generation Vivo NEX, as you can see from the text on the rear of the pop-up module in the image attached below, onto Xiaomi’s Mi 9. They have also swapped out the waterdrop notch and added an Iron Man wallpaper (and Iron Man 3 at that, which makes things even more doubtful) to make it look credible. However, it has been debunked.

The budget flagship segment is about to get a whole lot interesting very soon. Realme is already teasing what could be its upcoming flagship, the Realme X, but Xiaomi’s popular sub-brand Redmi too isn’t sitting ducks. It’s coming up with its own Redmi X flagship too.

Through a teaser video posted on Weibo, Redmi has already confirmed that its upcoming smartphone will feature a pop-up camera and well, it appears like we don’t have to wait much longer to get a first look at the flagship. A teaser poster for the Redmi X has today found its way online and to be honest, the Redmi X looks quite appealing.

As you can see in the poster attached below, the Redmi X falls in line with the myriad of leaks and rumors. It imbibes the design of Xiaomi’s latest flagship smartphone, the Mi 9 with a glass (or glass-like) rear panel and a triple rear-camera module. You can also see the pop-up selfie camera, a huge bezel-less screen with minimal bezels all-around, and the lack of a physical fingerprint sensor.

Yeah, it appears the Redmi X will carry the in-display fingerprint sensor we saw on Mi 9, making this an even attractive offering in the budget flagship segment. 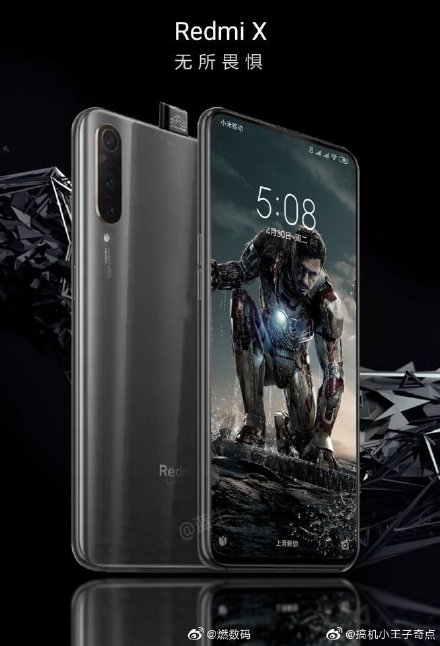 The poster also features a wallpaper of Iron Man (This picture is from Iron Man 3, which does create a few doubts around the leak), fanning the possibility of a partnership between Redmi and Marvel for a special edition smartphone. There’s nothing more one could possibly guess from the teaser here, except for that the silver color here looks so great.

Talking about the specs of the Redmi X, they were recently leaked online and we expect this flagship to feature a 6.39-inch FullHD+ display. Now, there’s no word on IPS LCD or AMOLED, but we always hope for the latter to be in tow. It will obviously be powered by Qualcomm’s Snapdragon 855 chipset (confirmed by Xiaomi’s VP) with up to 8GB of RAM and 128GB of storage.

The optics department will see the inclusion of a 32MP selfie camera baked in the pop-up module and a triple camera setup on the rear. It will most likely sport a 48MP sensor, an 8MP ultra wide-angle sensor, and a third 13MP telephoto sensor. The device will run MIUI 10 based on Android 9 Pie.

From the looks of it, the Redmi X seems to be shaping up to be a perfect budget flagship and it would be awesome if the Chinese giant decides to launch this smartphone as their Poco F2 flagship in India, Europe, and other countries. What are your thoughts on Redmi X? Let us know in the comments down below.