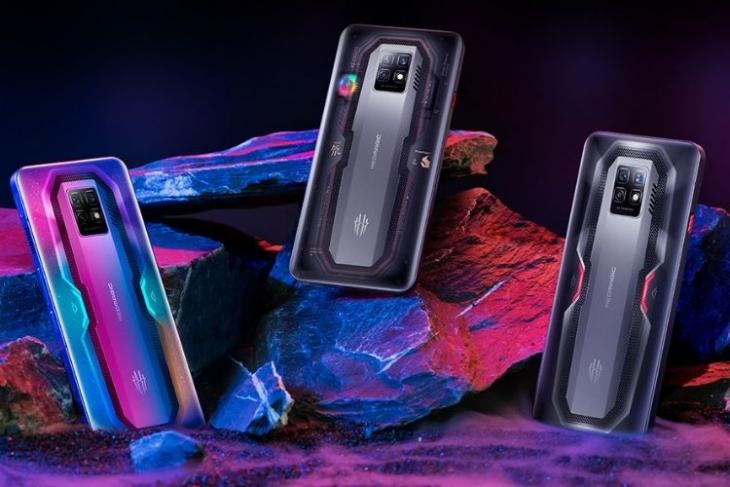 Nubia, as expected, has launched the new Red Magic 7 and the Red Magic 7 Pro flagship gaming smartphones in China. These are powered by the latest Snapdragon 8 Gen 1 chipset and come with a number of gaming-centric attractions such as a 165Hz display, a new ICE 9.0 cooling system, 500Hz touch sampling shoulder triggers, 165W GaN charger, and more. Here’s a look at all of them.

The Red Magic 7 Pro has a flat-edge design and features an under-the-display front camera, making it the first gaming phone to have one. This makes room for a fully bezel-less display. The display is rated 6.8-inch and is AMOLED in nature. It supports a 120Hz refresh rate, a touch sampling rate of 960Hz, and a Full HD+ screen resolution. The screen has a UDC Pro chip. There’s support for up to 18GB of LPDDR5 6400 MHz RAM and 1TB of UFS 3.1 storage.

The camera arena features a 64MP main camera, an 8MP ultra-wide lens, a 2MP macro camera, and a 16MP front camera. But, this ain’t what the phone focuses on.

The phone has support for 500Hz touch sampling rate shoulder triggers that use a five-channel high-performance custom IC for really smooth gameplay and complex actions.

The new ICE 9.0 cooling system has 9 layers of cooling structure with a cooling material area of up to 41279mm² and a 4124mm² super large VC cooling plate, which is a first for a gaming phone. This includes a built-in turbofan, which has an energy-efficient motor and can cool the CPU performance by 16 degrees.

The Red Magic 7 copies most of the 7 Pro’s specs but there are a few changes too. Firstly, the design is different as there is a vertical strip to house the rear cameras. Plus, it doesn’t feature an under-the-display camera. The phone has a 6.8-inch Full HD+ AMOLED display but with a higher 165Hz refresh rate and a lower 720Hz touch sampling rate. It has up to 16GB of LPDDR5 RAM and up to 512GB of UFS 3.1 storage.

The camera department is the same, except there’s an 8MP selfie shooter. The Red Magic 7 is backed by a 4,500mAh battery with support for slower 120W charging speeds. The smartphone also supports Wi-FI 6E, a 3.5mm audio jack, 5G, stereo speakers, an in-display fingerprint scanner, and more.

Gaming-related features such as the shoulder triggers, ICE 8.0 cooling system, and more are also present.

Both phones have a Transparent Edition and come with accessories like a Turbo Cooler (CNY 199) and REDMAGIC Magnetic Cooler (CNY 299).

The Red Magic 7 series will be available to buy in China, starting February 21, and is expected to reach the global markets on February 22 with sales starting from March 10.