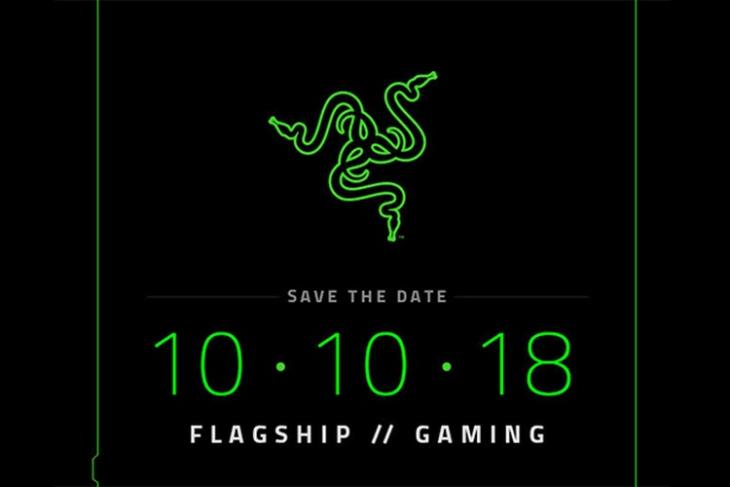 Razer has sent out press invites for an event scheduled for October 10, where the company is expected to unveil the Razer Phone 2, the successor to its first gaming smartphone, the Razer Phone. Earlier this month, Razer confirmed that the original Razer Phone was a success, which prompted the development of the second generation Razer gaming smartphone that could be unveiled later this year.

As far as specifications and design are concerned, not much is known about the Razer Phone 2, and the leaks we have seen so far have been contradicting in nature. Noted leakster, Roland Quandt recently tweeted that the Razer Phone 2 might come with Razer’s Chroma LED effects built-in, thanks to an LED indicator developed by Texas Instrument.

The Razer Phone 2 will (highly likely) finally have Chroma LED effects built in. They're working to use an LED controller from Texas Instruments to make this happen so the phone lights up when notifications come in.

A device alleged to be the Razer Phone 2 also appeared on Geekbench and AnTuTu earlier this month. As per the AnTuTu listing, the Razer Phone 2 will be powered by the Qualcomm Snapdragon 845 SoC, coupled with 8 gigs of RAM and 512GB of internal storage, while Android 8.1 Oreo will handle things on the software side. Interestingly, the listing claims that the upcoming device will pack a QHD display with a 16:9 aspect ratio, and not an 18:9 aspect ratio which has now become a mainstay on high-end devices.

As far as the Razer Phone 2’s design is concerned, there are some conflicts as to how the device will look. Android Headlines recently received images of the Razer Phone 2 from a ‘reliable source’, which depict a device which is nearly identical to its predecessor, except the fact that the position of the selfie camera on the Razer Phone 2 has been changed.

"Jeff": I took some pictures of the upcoming Razer phone. Almost the definitive design.
Evan: Cool, where did these come from?
J: Got a friend in Razer, he sent me them. Obviously I can't reveal his name.
E: Sure you can, just make something up. You've been on a roll so far! pic.twitter.com/cVn2Ycr7Y1

Noted leakster, Evan Blass, recently tweeted an image of a much different-looking Razer Phone which retains the blocky design of its predecessor and features a large touchpad which covers nearly half of the device’s rear panel. The leaks might send you in a bit of confusion, but one thing is for sure, Razer will almost certainly equip the Razer Phone 2 with top-of-the-line hardware in order to position it as the best gaming smartphone out there.