Skip to content
Home News Get the PlayStation VR for Just $199.99 till March 3; Discounts on Game Bundles Too 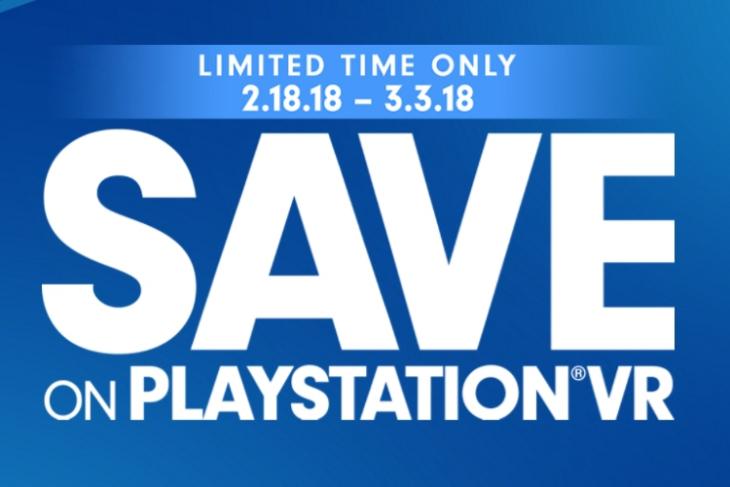 Sony’s PlayStation 4 is one of the best-selling gaming consoles thanks to the the long list of exclusive titles, and the awesome hardware. But another thing that gives the PS4 the edge against Microsoft’s Xbox is the fact that the console also has great native support for VR experiences. And it looks like Sony is ready to make PlayStation VR a household name with some heavy discounts.

As announced by Sony in an official listing on its website, the Sony PlayStation VR will be available for $199.99 from Feb 18 to March 3, 2018. This is a hefty discount, considering the VR headset usually retails for $299.99.

Apart from the standalone VR headset, the company is also offering lucrative deals on a few PSVR bundles as well. For the above mentioned price of $199.99, you can get the PlayStation VR with the Gran Turismo Sport Bundle. Then, for an extra $100, you can get Bethesda’s DOOM VFR PSVR Bundle for just $299.99. Lastly, the company is also offering the Skyrim VR with PSVR bundle, that comes with not only the PSVR headset and camera but also offers 2 PlayStation Move Motion controllers for an enhanced VR experience. This package is priced at just $349.99.

Sony has also announced that all the aforementioned deals will be available across all of its partner stores, such as Gamestop, Walmart, Best Buy, and Target. Interested customers can avail the discounts at both online and offline stores.

For $199.99, the PSVR Gran Turismo Bundle is one of the best bundles that you can buy. Sony knows that with the Xbox One X and the hefty discounts on the Xbox One S, Microsoft is back in the competitive market, and Sony is taking good measures to hold on to its throne. If you are looking to buy a gaming console with VR support, the PSVR is not only a compelling choice but in fact, your only choice. This is considering the fact that Microsoft’s Mixed Reality is still far from making its way to the Xbox consoles.