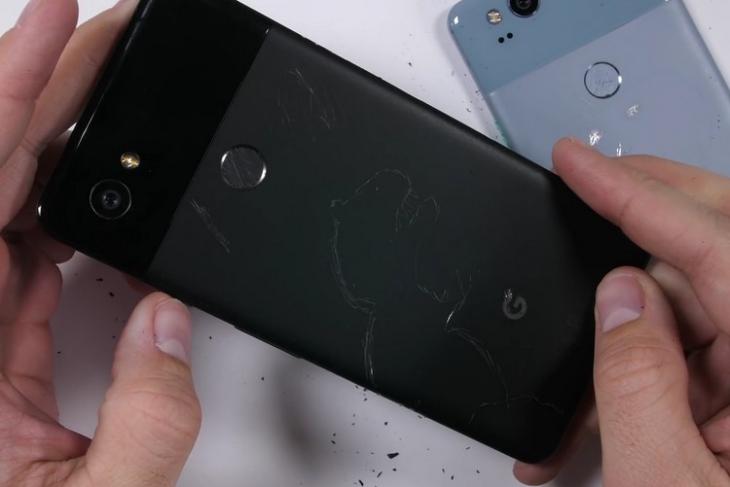 Pixel 2 XL has had its fair share of problems since the day it was launched. Although its extraordinary camera coupled with snappy stock Android performance made it one of the best Android smartphones of this year, the phone was hard to recommend to users because of the issues surrounding its display and speakers. And now, recommending this phone has become even harder, owing to its weak build quality, which was discovered in a series of durability tests conducted by the popular YouTuber, JerryRigEverything.

If you read our Pixel 2 Review, you might have remembered that I praised the coating on its metal body as it made the phone feel really good in the hand, and also gave it a distinct and premium appearance. However, in the durability test conducted by JerryRigEverything, he discovered that the coating was not durable as it easily showed scratched and scuffs even after a brief encounter with general items, which you might carry in your pockets, like keys. Also, the scratches and scuffs were found to be permanent and didn’t rub away as they generally do on a smartphone with a metal body, like on the OnePlus 5T.

Also, since the fingerprint sensor doesn’t use any special material (for example, ceramic is used by OnePlus and Xiaomi for fingerprint scanners), it easily gets scratched, just like the body of the phone. However, it needs to be mentioned that the sensor didn’t stop working even after it was scratched. If there’s any consolation for the prospective buyers, it’s the fact that Gorilla Glass 5 on the front does what its supposed to do. It didn’t scratch easily and held up pretty well against the abuse. The glass protecting the primary camera at the back was also found to be tough and didn’t scratch easily.

Also, I was really surprised to find that the Pixel 2 XL came out to be more durable than its smaller sibling the Pixel 2 when the phone was put through the bend test. As a rule of thumb, the larger phone always performs worse in a bend test, however, the Pixel 2 XL happens to be an exception. After watching the durability test video, I am really concerned about the fact that its metal body along with its fingerprint sensor get scratched so easily. Now, it’s almost impossible for me to recommend this phone to our readers. That said, it should be considered that the real world durability will be different than what is estimated in lab tests. So, if you are a Pixel 2 Xl owner, do let us know how the phone is holding up in the comments section below. Your experience will help our readers make an informed choice.