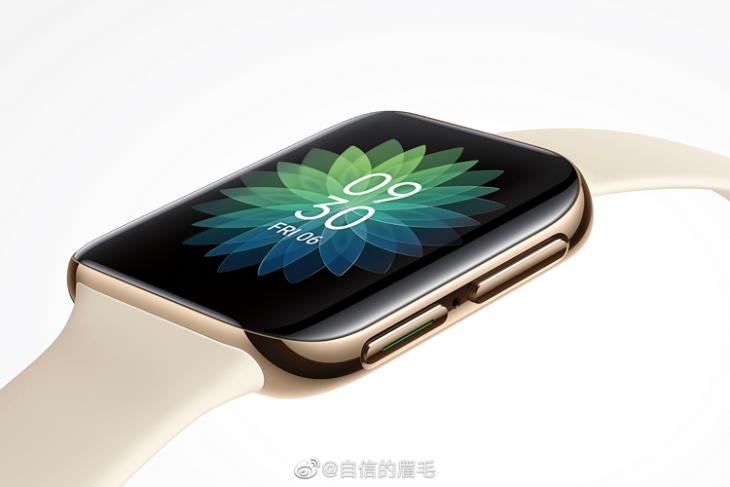 We’ve heard rumors in the past that Chinese smartphone giant Oppo is working on a smartwatch that would compete against the likes of the Apple Watch. Oppo’s VP Brian Shen has now shared an official render of the Oppo smartwatch that gives us an early glimpse at the upcoming Oppo smartwatch’s design.

Shen shared the official smartwatch image on Chinese microblogging platform Weibo. From the looks of it, Oppo’s smartwatch shows a resemblance to Apple Watch’s design. The render confirms a gold color variant with metal edges and matte cream-colored straps.

He says that the watch will sport a flexible display curved towards the edges. Unlike the Apple Watch, Oppo’s smartwatch equips two physical buttons on the right side in the place of the crown.

The render has a flower watch face with the date “FRI 06”, which could be a hint to the launch date – March 6. Oppo earlier confirmed that it would launch a smartwatch in the first quarter of 2020 at its Oppo Inno Day event that took place in China.

In case you’re out of the loop, Oppo’s smartwatch is hinted to come with ECG support like the Apple Watch. We have already seen multiple incidents of Apple Watch saving lives and hence, the addition of an ECG sensor is indeed a welcome move.

Oppo has officially started teasing the upcoming watch, revealing that it will feature a curved display with 3D glass. In a tweet on Monday, the company’s vice-president, Brian Shen, claimed that the features will make the upcoming device a ‘game-changer’. The company is yet to announce anything else about its first smartwatch, but we’ll update you with any new info between now and the expected launch on March 6.

Here's another look at the forthcoming OPPO Watch. 👀 The curved screen and 3D glass will be a game changer. 🤓 pic.twitter.com/ozbl9BXNZq