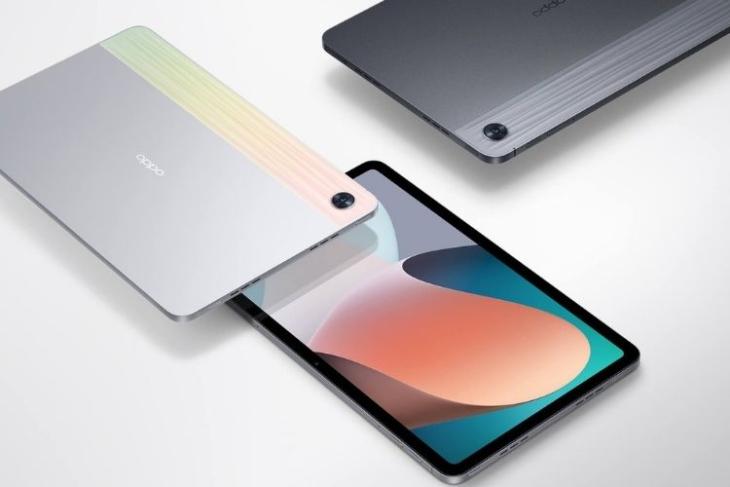 Oppo entered the tablet market with the launch of the Oppo Pad in February earlier this year. Now, alongside the Oppo Reno 8 series, the Chinese company has expanded its tablet portfolio with the unveiling of the affordable Oppo Pad Air in China. The tablet features a 120Hz display, a mid-range Snapdragon chipset, a large battery, and more. Let’s look at the specs and price details for the Pad Air:

Oppo Pad Air carries forward the same aesthetics as the original tablet, with its shiny dual-tone finish on the rear panel. This time around, however, the company has ditched putting its own brand name in the strip on the back. Instead, it has gone for a wavy pattern, but there’s some sheen to it. It weighs 440 grams and is pretty slim at just 6.94m.

Being a cheaper alternative to the Oppo Pad, this tablet’s hardware has been downgraded on all fronts. Starting with the display, the Pad Air sports a smaller 10.36-inch 2K LTPS LCD display with a standard 60Hz refresh rate and a 120Hz touch sampling rate. The original Oppo Pad had a 120Hz 2.5K+ LCD display. The panel here boasts a 2000 x 1200-pixel resolution, minimal black bezels, and up to 360 nits of peak brightness.

Under the hood, the compay has swapped out the Snapdragon 870 for a mid-range Snapdragon 680 chipset. It is an octa-core chipset with 4G support, built on the 6nm architecture, and features Kryo 265 CPU cores and the Adreno 610 GPU. You will also find up to 6GB of LPDR4x @ 2133MHz RAM and up to 128GB of UFS 2.2 storage (expandable up to 512GB via a microSD card).

As for the cameras, you have a single 8MP (f/2.0) camera on the rear with an 80-degree FOV and up to 4K @ 30FPS video recording support. There’s a 5MP (f/2.2) sensor on the front for clicking selfies and attending lectures on apps like Zoom, Google Meet, and more.

Moreover, the Oppo Pad Air runs ColorOS 12.1 for Pad based on Android 12 out-of-the-box. It also comes equipped with a 7,100mAh battery (smaller than the 8,360mAh battery on their first tablet) and 18W fast-charging (as opposed to 33W on the original). Also, the tablet here includes a USB Type-C port, Wi-Fi 802.11ac, Bluetooth 5.1, and quad-speakers with Dolby Atmos support.

That’s not all, though. This cheaper tablet from Oppo also supports the keyboard and stylus accessory as the original. It also doesn’t come with a fingerprint sensor and relies on camera-based Face Unlock (not as secure) in terms of biometric. We don’t have the Pad Air at hand right now, but you can watch our hands-on video for the Oppo Pad right here:

The company has also launched a new pair of TWS earbuds called the Oppo Enco Buds R. The earbuds support an AirPods-like half in-ear design, include a 13.4mm driver, and up to 20 hours of battery life.

You also get AI noise reduction during calls, a unique bass guide, and support for touch controls. A highlight here is that you can use these touch controls as a shutter button to click photos on your Oppo phone. The Enco Buds R support IPX4 rating, a game mode, and Bluetooth 5.2 connectivity support. They are priced at CNY 299 (~Rs 3,500) and will be available to buy from June 1 in China.

This affordable tablet will come in two colorways, namely Star Silver and Feather Grey. It will be available to buy from June 1 in China. We currently have no information on whether Oppo plans to launch its tablets globally or in India. What are your thoughts on this device? Let us know in the comments below.