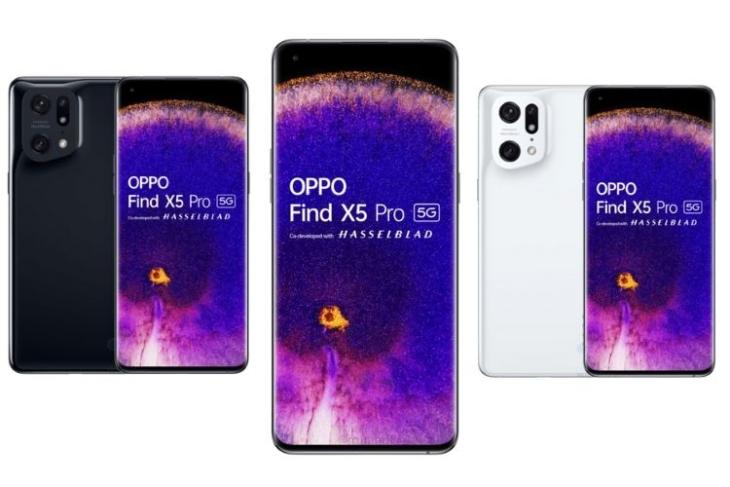 Oppo is planning to launch its next-gen smartphone, the Oppo Find X5 Pro, under the flagship Find series in the first half of this year. Last year, we saw the renders of the device surface online. And now, the entire specs and features of the Find X5 Pro have been leaked, revealing almost everything about the device. So, let’s take a look at the details.

A recent report by German publication WinFuture has revealed that the device will be priced above €1,200 (around Rs 1,02,000) in European regions and will come with various flagship-grade specs like the Snapdragon 8 Gen 1 chipset, Hasselblad cameras, under-display fingerprint sensor, and more.

Starting with the display, the Oppo Find X5 Pro will reportedly feature a 6.67-inch AMOLED display with support for a 120Hz refresh rate and LTPO (low-temperature polycrystalline oxide) technology. It is said to support a screen resolution of 3216 x 1440 pixels and will support 10-bit HDR. There will also be a punch-hole at the top left to house the 32MP selfie snapper.

Speaking of the cameras, the Oppo Find X5 Pro is rumored to come with a triple-camera setup at the back, housed inside a unique-looking camera module. As per the report, Oppo has worked with Swedish camera giant Hasselblad to develop its camera setup, much like OnePlus.

There could be a 50MP Sony IMX766 primary camera with OIS support, a 50MP ultra-wide lens, and a 13MP zoom lens with support for up to 5x zoom onboard. The report also claims that the Hasselblad-branded cameras on the Find X5 Pro will be powered by Oppo’s in-house MariSilicon X Imaging NPU that will further enhance images using AI features, which was recently introduced.

Under the hood, the device will pack the latest flagship-grade Snapdragon 8 Gen 1 SoC, paired with 12GB of LPDDR5x RAM and 256GB of UFS storage. There could also be a 5,000mAh battery on board with support for wireless charging and 80W wired fast charging, similar to the recent OnePlus 10 Pro. In fact, most of the specs seem skin to its sister brand’s latest flagship offering! The device will run the Android 12-based Color OS 12.1 out-of-the-box.

Other than these, the Find X5 Pro will support 5G connectivity, Bluetooth 5.2, and Wi-Fi 6E technologies. It is expected to include an in-display fingerprint sensor, Dolby Atmos-supported stereo speakers, support IP68 rating, and might come in two colorways – Ceramic White and Ceramic Black.

This is all we know about Oppo’s upcoming flagship smartphone, the Oppo Find X5 Pro, right now. Although, you should note that these details aren’t official. We are yet to get concrete details and even an official launch date, but we expect Oppo to reveal in the coming days. Stay tuned for further updates and let us know your thoughts on the upcoming Find-series device in the comments below.