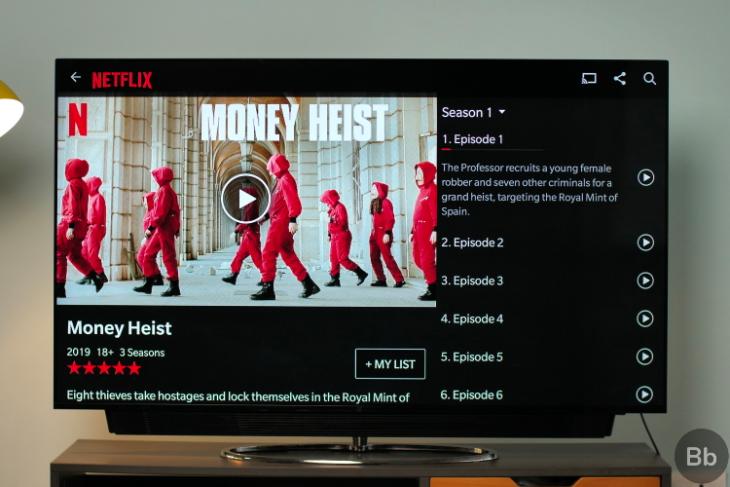 OnePlus finally put all the rumors and speculations to rest, unveiling the much-awaited OnePlus TV lineup in India – for the first time at a launch event in New Delhi today. The OnePlus TV Q1 series is certainly a premium offering which conforms to the company’s superior standards. You get a 55-inch 4K QLED panel, razor-thin bezels, 50W speakers, Android TV 9.0 with Connect support, and a lot more.

While all of this sounds like the perfect recipe for an immaculate smart TV experience, there’s one caveat to the OnePlus TV and that’s the lack of Netflix support. Yeah, your OnePlus TV won’t come with Netflix support out-of-the-box and that’s disappointing to witness at this price point.

OnePlus TV is bereft of one of the most popular video streaming services at launch. It might work against the company at launch as users willing to pay a premium price tag would certainly expect native Netflix support. But, that’s not the case here. We did try something out on the OnePlus TV though.

We couldn’t have gone without tinkering with the OnePlus TV, so we tried installing the Netflix app on our review unit. One of the APKs (mobile version) did install on our unit, however, the experience was pretty substandard. Well, we just wanted to try installing Netflix on the smart TV, but you won’t need to go to such lengths to run Netflix on the OnePlus TV.

The company has officially confirmed that it’s currently testing Netflix support on OnePlus TV and it’s taking longer than was earlier anticipated. That’s the reason why Netflix support has been delayed. OnePlus says that it aims to roll out support for this popular video streaming service via an update sometime in October, i.e next month.

I know, the situation may sound familiar as the same has happened with Xiaomi in the past. Even Xiaomi had vowed that Netflix support will roll out really soon around a year ago, but it is now that it has finally made the streaming service available to older Mi TV users. One year too late.

So, this especially makes me skeptical about Netflix support coming to OnePlus TV. The company could be telling the truth, but I expect the rollout to not be immediate. Would OnePlus be able to provide Netflix support within a month? What is your opinion on this? Let us know your thoughts in the comments below.