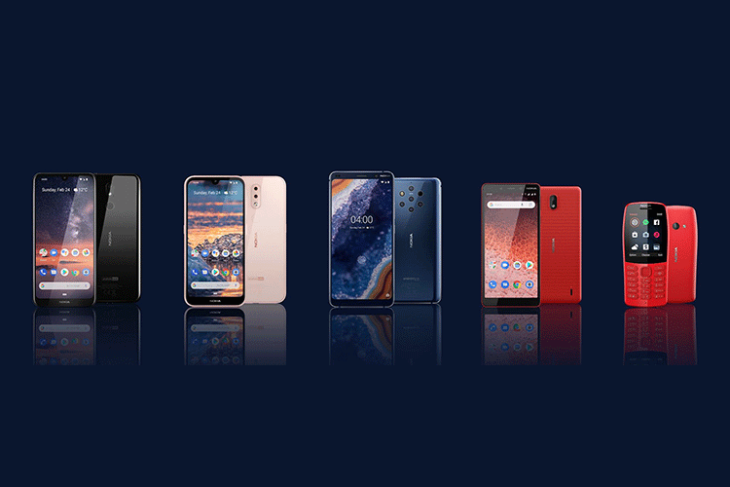 Besides the premium and highly innovative Nokia 9, HMD Global also shored up its budget lineup along with a new smart feature phone.  Let’s start with the Nokia 210, which is the latest internet-connected feature phone from the Finnish company. You can read all about the Nokia 9 Pureview right here.

This category has been a success for Nokia, so let’s see what the Nokia 210 brings to the table.

Nokia is renowned for its feature phones across the globe and well, the first phone HMD Global pulled out at its event was the Nokia 210. It’s a simple candy bar phone we’re all familiar with, that runs S30+ and only has support for GSM 900/1800, targeted for the Central and South America markets as well as parts of Asia. There’s not much to get excited here, but you do get a 2.4-inch color display and a camera, along with in-built games such as Snake, weather app, Facebook, an MP3 player and FM radio.

The Nokia 210 was the only feature phone HMD Global announced, while every other phone runs Android One. Let’s begin with the lower end of the spectrum.

The entry-level Nokia 1 now has a bigger sister, as rightly stated by Juho Sarvikas, HMD Global’s Chief Product Officer. The Nokia 1 Plus is a refined and modern upgrade for last year’s Nokia 1, with a polycarbonate shell that has a 3D nano-pattern design.

Step up to a smarter phone experience with the new Nokia 1.1 Plus. Now with Android Pie (Go edition). https://t.co/L21w3voQv6 #GetSmart #MWC19 #Nokiamobile pic.twitter.com/1o0aKjKltg

The Nokia 1 Plus features a 5.45-inch FWVGA+ IPS LCD display, with an 18:9 aspect ratio. It has been powered by a quad-core MediaTek MT6739WW processor, coupled with 1GB of RAM and 8GB of storage. It runs Android 9 Pie (Go edition) out of the box. There’s a single 8MP camera on the rear, paired with a 5MP selfie camera.

The Nokia 3.2, even though it sports a polished polycarbonate unibody design, the device looks absolutely stunning. It mimics the design of the more expensive Nokia 5.1 Plus ans 6.1 Plus with a notch in the front and a curvy profile.

There’s a 6.26-inch HD+ screen along with a 13MP primary sensor, coupled with a fingerprint sensor on the rear. It’s powered by Qualcomm Snapdragon 429, along with 2 or 3 GB RAM. The 5MP front camera in the small notch also supports face unlock.

There’s a 4,000mAh battery on board which should deliver some awesome battery life given the low-powered internals.

It will be available in Black and Steel, starts at an average price of $139. It will start shipping in April later this year.

Introducing the new Nokia 4.2. It's got it all. And more, with Google Assistant. https://t.co/PiioSCbLXN #GetSmart #MWC19 #Nokiamobile pic.twitter.com/v3ZvSExeEr

It’s powered by the Snapdragon 439 SoC, and has either 2/3 GB of RAM and 16 or 3GB storage, depending on the variant you choose. There’s a measly 3,000 mAH battery and no fast charging support as far as we see, so the Nokia 4.2 is actually worse off than the 3.2 in this regard.

The Nokia 4.2 will be available in Black and a new Pink Sand color options. It will start at an average price of $169 with shipping set for April.