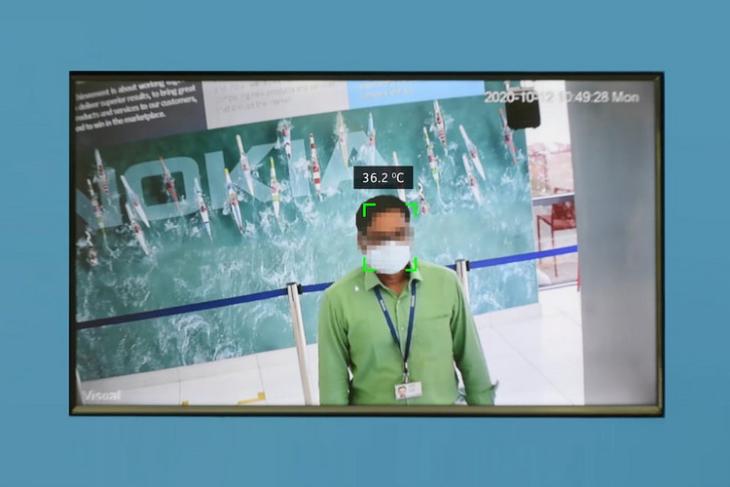 Nokia has unveiled an automated monitoring system that uses thermal cameras and real-time video analytics to spot possible COVID-19 patients and, whether they are wearing masks (or not). The company has been using the technology at its Chennai factory, which had to be closed earlier this year after dozens of employees at the said facility tested positive for the deadly disease.

The company claims that it has been using the system for more than two months and has already screened over 200,000 people. Nokia factories and R&D centers at other locations are also reportedly deploying the new technology, with talks about possible use in North America, Latin America and Asia at schools, government buildings and other facilities said to be at “pretty advanced stages”.

In a statement announcing the launch, Amit Shah, the head of Analytics and IoT for Nokia, said: “Our Nokia Automated Analytics Solution brings centralized data, analytics, and an automation management system, allowing large organizations to make intelligent decisions to protect their people and facilities during and in a post-pandemic world”.

As for the workings of the new technology, it uses a thermal camera to capture video footage and take individual temperature readings of every person that enters the screening site. While the former determines whether the person is complying with mask-wearing rules, the latter checks whether the subject has a fever – one of the leading symptoms of CoVID-19. Based on the data, the analytics engine then decides whether the person requires additional screening or not.

The system also comes with privacy settings that enable the faces of the subjects to be blurred in compliance with local laws. According to the company, the scope of the technology could also be expanded in the future to include other features, like predictive surveillance, machine maintenance, and thwarting security threats.