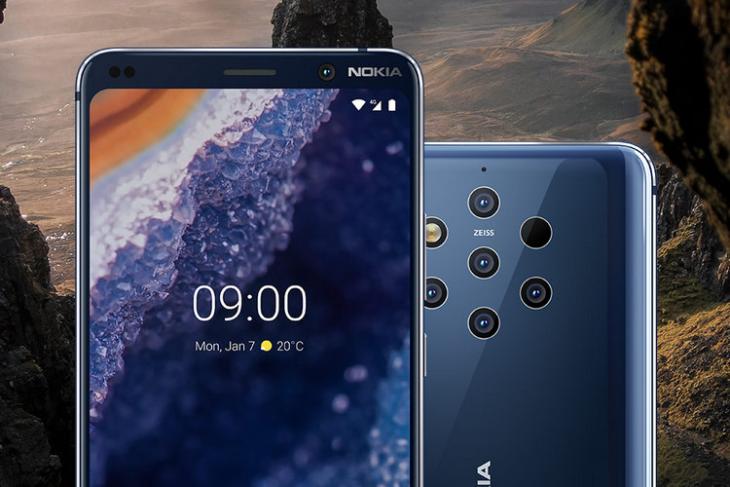 After multiple delays, HMD Global finally started teasing the arrival of its penta-camera Nokia 9 Pureview smartphone in India on Twitter last week. This made everyone much excited to try out the fascinating camera setup, sometime towards the end of July or in early August. However, the company has jumped the gun and quietly launched Nokia 9 Pureview in India today at a price tag of Rs 49,999.

The Nokia 9 Pureview has been made official for India by HMD Global’s Chief Product Officer Juho Sarvikas, who took to Twitter to announce the availability. The device will become available for sale on Flipkart and Nokia’s website starting today, while offline channels will see it retailing from July 17.

As world's first 5 camera array smartphone arrives in India, I am delighted to give you an exclusive preview into the story of Nokia 9 Pureview. Get ready to #ExploreEveryDetail and be your own creative director 🇮🇳 📷📷📷📷📷 @nokiamobileIN @nokiamobile #nokia9pureview pic.twitter.com/OIAgZ0RQRZ

To recall what the smartphone has to offer, you get an all-glass sandwich design, with Corning Gorilla Glass 5 protection on both the front and rear. The 5.99-inch Quad-HD pOLED display has a whopping 2K resolution, with the PureDisplay technology for vivid colors and HDR 10 support.

There’s modest-size bezels both above and below the screen, which makes it look a bit dated, but it’s also the first Nokia-branded Android phone with an in-display fingerprint scanner baked in. Talking about dated things, the Nokia 9 Pureview is powered by last year’s Snapdragon 845 chipset, coupled with 6GB RAM and 128GB internal storage.

Coming to the selling point of the Nokia 9 Pureview, it’s the penta-camera setup which HMD Global has developed in partnership with Light. This includes two standard RGB sensors for capturing your vibrant color information and three monochrome sensors onboard for capturing a much higher spectrum of light. You can read everything you will need to know about this camera setup right here.

There’s also a smaller 3,320mAh battery onboard and the device runs stock Android 9 Pie out-of-the-box as part of the Android One program. You also get wireless charging and the device is IP67-certified, denoting water and dust resistance.

Nokia 9 Pureview: Is it Worth the Price or Hype?

So, the important question – does the Nokia 9 Pureview make a good buy at Rs 49,999? Well, not really. The smartphone does boast a premium design, modern features, and a penta-camera setup that will tempt consumers to try it out and see how the photos turn out. I mean, we have already seen how detailed and crisp the photos turn out to be, but dated internals and the availability of better, more well-rounded smartphone offerings at lower prices make it look lackluster and undesirable.

HMD Global started out strong a couple of years ago and everyone thought that your oh-so-loved Nokia brand may finally have its shot at revival. And it did seem so for the first year, however, the rampant competition and the hunger for more value for money phone offerings in India has made Nokia’s recent launches seem relatively unappealing to the masses. Nokia 9 Pureview is going to join that list, alongside the Nokia 8 Sirocco, which was another interesting phone from the company and will be laid to rest without much hullaballoo.

What are your thoughts on the Nokia 9 Pureview and its India pricing? Excited to try out the five camera setup? Let us know in the comments below.

Nokia 9 PureView Gets a Super Low Score From DXOMark