The Nokia 6.1 Plus has been launched starting at Rs. 15,999 and unlike the Chinese variant (Nokia X6), this one comes only in the 4GB/64GB variant, sporting a Qualcomm Snapdragon 636 octa-core processor. We’ve already covered the battery test of this new smartphone from HMD Global, and if you’re wondering what the performance of the phone is like, we’ve done that for you too.

Before we dive into the tests we performed on the Nokia 6.1 Plus and the way it handled different tasks, let’s get the specifications out of the way.

Now that we’ve gotten those out of the way, let’s jump into how the phone actually performs in various benchmarks and real world performance tests.

We ran the usual benchmarks on the Nokia 6.1 Plus to get an overview of what we can expect from the phone before we put it through its paces in our real world tests. We also benchmarked the Redmi Note 5 Pro since it’s in a similar price range so as to get a comparative idea of where the two phones stand. 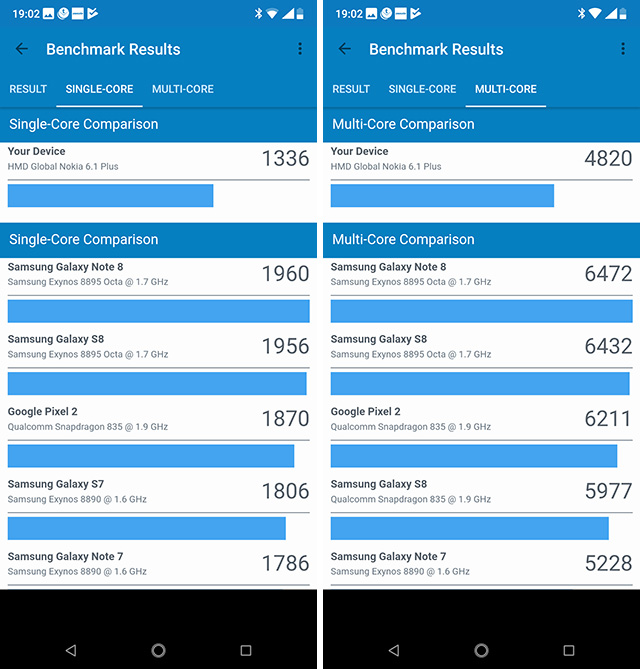 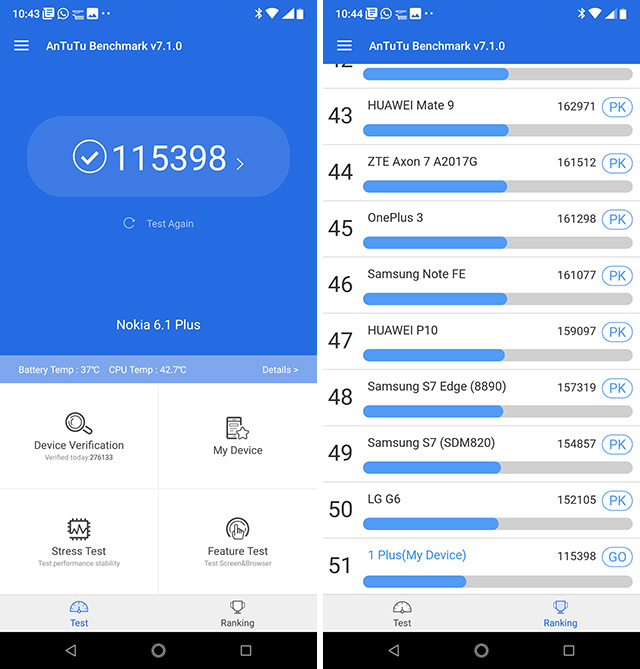 While the benchmark scores of the Nokia 6.1 Plus are basically indicative of the fact that we can expect Redmi Note 5 Pro like performance from the phone. To test out the real world performance I put the phone through some gaming tests, and I used it as my daily driver for almost a week.

In terms of gaming, I played Asphalt 9, PUBG Mobile (obviously), and Marvel Strike Force on the phone. I also kept a track of the FPS values that each of these games was pushing out.

Starting off with Asphalt 9, the newest game from Gameloft has some incredible graphics and races that are more intense than ever. In terms of perceived performance, I think the phone went through the game like a charm and I didn’t notice any stutters or lags while racing through People’s Square or in Cairo. It was all pretty awesome and I loved it. In terms of frame rate, Asphalt 9 ran at a median frame rate of 30FPS, and had 89% stability. True, that could’ve been higher, but it’s still a decent score to get.

Moving on to PUBG Mobile, the game auto-set the graphics to Low, which I expected because of the Snapdragon 636 and 4GB of RAM that the phone has. Surprisingly though, PUBG wouldn’t even let me turn up the graphics settings. Anyway, in Low settings, the game performed smoothly (as it should) and I faced no issues with getting a Chicken Dinner. It was definitely a fun experience even though I’m used to playing on high settings with my OnePlus 5. In terms of frame rates, the phone got a median frame rate of 26FPS which is okayish, though nothing to be overly proud of, and had 87% stability in its FPS values which is definitely good for a game like PUBG Mobile.

I also played Marvel Strike Force on the Nokia 6.1 Plus and as expected, the game ran perfectly fine. I personally don’t enjoy this game all that much, but it’s definitely a fun game. In terms of frame rates, the phone churned out an easy 55FPS median frame rate with a stability of 77%.

In terms of everyday usage, the Nokia 6.1 Plus won’t disappoint you. Thanks to stock Android running on Snapdragon 636 and with 4GB of RAM, the phone doesn’t lag even when I’m using multiple apps and constantly switching between them. I also found that app launches are generally fast on the Nokia 6.1 Plus, although sometimes apps like Instagram would take a millisecond longer to launch which can get infuriating, but I won’t blame the Nokia 6.1 Plus for that; I’ve observed Instagram behaving like this on my OnePlus 5 as well. 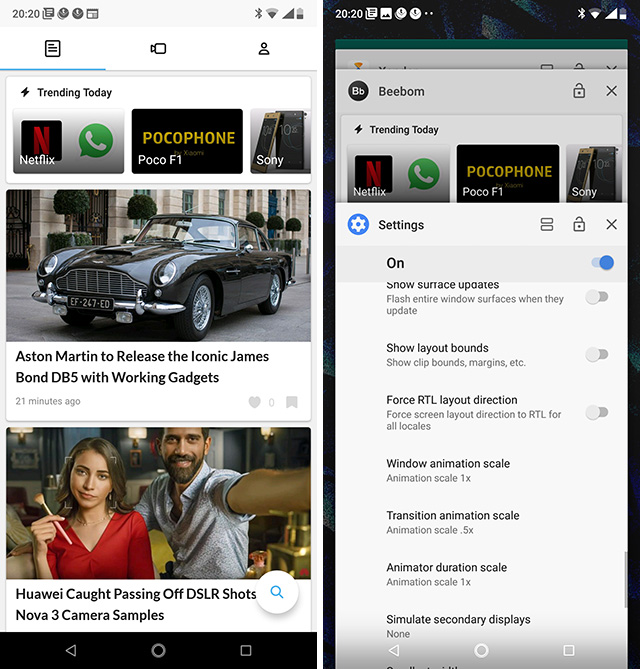 The phone has standard Android animations though, and those can sometimes make things feel slower than they actually are. I’d recommend you to turn down the ‘Transition animation scale’ inside Developer Settings to 0.5x to get a snappier feel without feeling like the phone is absolutely not animating anything at all.

Nokia 6.1 Plus Performance Test: A Great Performer for Its Price

So basically, the Nokia 6.1 Plus is a pretty great performer for the Rs. 15,999 price it’s coming in at. The phone has decent hardware for the price, and if you look at it that way, it’s basically a Redmi Note 5 Pro with stock Android. It performs pretty much the same way as the Redmi Note 5 Pro does, however, in some places, especially in games like PUBG Mobile, I feel like Xiaomi’s offering performs slightly better, though not really noticeably so. It’s more or less a personal choice at this point. If you want a metal build, gesture navigation, and performance that won’t let you down, the Redmi Note 5 Pro is the one for you; however, if you want stock Android, decent hardware, and performance that is definitely pretty great, the Nokia 6.1 Plus is the phone to go with.