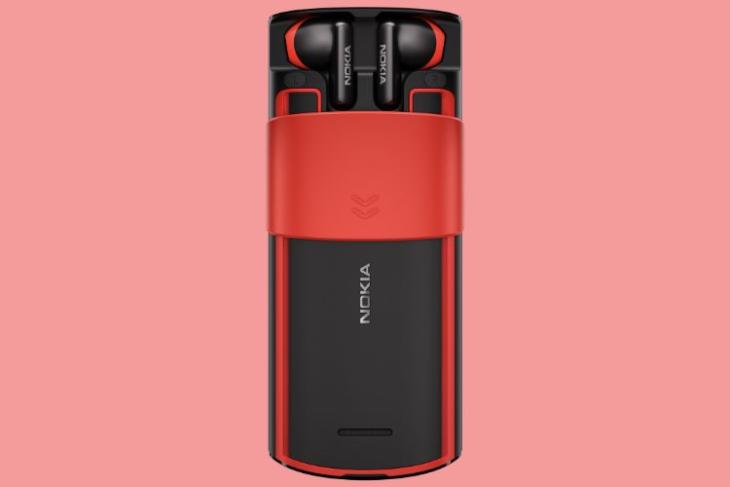 HMD Global has introduced a new feature phone in India with a pretty interesting concept. The new Nokia 5710 XpressAudio, which made its global debut recently, carries forward the XpressMusic lineage and thus, has an inbuilt pair of wireless earbuds. Yea, you heard that right! Read on to know more about the new Nokia phone.

The Nokia 5710 XpressAudio looks just like any other feature phone, except its top portion houses a pair of wireless earbuds. This acts like the charging case for the Nokia earbuds, which can be used via the slider. These earbuds can also be paired with another smartphone.

In case you want to listen to music with friends, you can switch to the loudspeakers. There are dedicated music buttons, an in-built MP3 player to store thousands of songs, and support for wireless FM radio.

The feature phone supports 4G VoLTE and environmental noise cancellation (ENC) for calls. It is backed by a 1,450mAh removable battery, which can last up to 31 days on standby. The Nokia 5710 XpressAudio features a 2.4-inch QVGA display and comes with Numeric and Function keys.

The phone is powered by the Unisoc T107 chipset, coupled with 4MB of RAM and 128MB of storage. The storage can be expanded by up to 32GB via a memory card. It runs the S30+ operating system and supports in-built games like Jocuri Gameloft (Snake, Tetris, BlackJack, Arrow Master, Air Strike, NinjaUp) and Jocuri Origin Data (Racing Attack – Multiplayer, DOODLE JUMP, CROSSY ROAD).

Additionally, the feature phone comes with Bluetooth version 5.0 and a Micro-USB port. It houses a 0.3MP rear camera with a flash.

The Nokia 5710 XpressAudio comes with a price tag of Rs 4,999 and will be up for grabs, starting September 19 via offline and online channels.

It comes in White/Red and Black/Red color options.