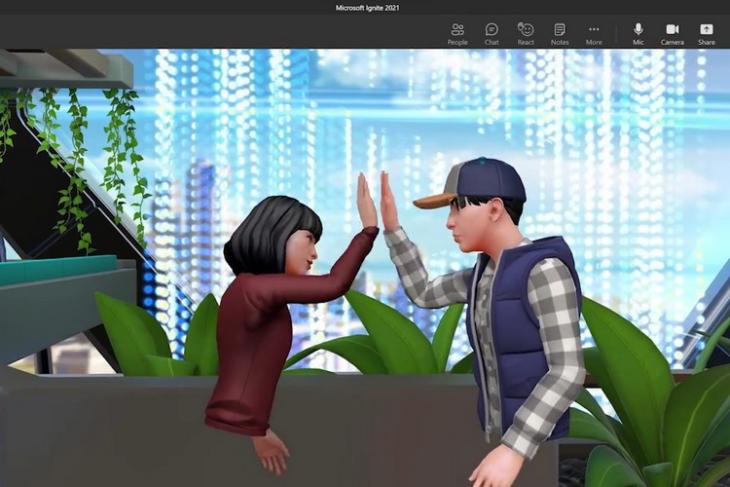 While Meta is extensively working to make mixed reality a norm in the digital communications sector, it is not the only company with this vision. Amongst others, Microsoft is another tech giant working on virtual environments and holograms with its Mesh project. Although the availability of mixed reality platforms might take some time, the Redmond giant has taken a more practical approach to bring the taste of a virtual platform to its communications app Teams. Enter Mesh for Teams!

Microsoft recently announced Mesh for Teams that integrates the company’s mixed reality technologies into Teams to add personalized 3D avatars and virtual spaces. So, rather than joining a video conference with participants stuck inside confined space on a grid of camera feeds, users would be able to join full-fledged virtual offices in the form of personalized 3D avatars.

With this, users won’t need a webcam feed to join a virtual conference. Instead, they will be able to join the space with their colleagues and friends as customized avatars. As of now, the avatars can only communicate with each other using dialogue bubbles (preview below). However, Microsoft eventually plans to add realistic face-based movements to the avatars that would rely on users’ webcams.

Users can also use Microsoft’s HoloLens devices and the Mesh app for HoloLens to connect and virtually interact with other digital avatars and 3D content in an environment as if they are physically there in the space. Microsoft says that these are some of the initial glimpses of its Mesh technology. The company has been developing its communications app Teams to make it on par with the competition. With this addition, Teams will surely have an edge over other similar video conferencing apps like Zoom and Google Meet.

Although Microsoft is not giving away much detail about its Mesh plans for Team, the company will reportedly start rolling out the features sometime during 2022. Meanwhile, companies can still use its Mesh platform to create complex 3D environments that can be accessed by users using a variety of devices.