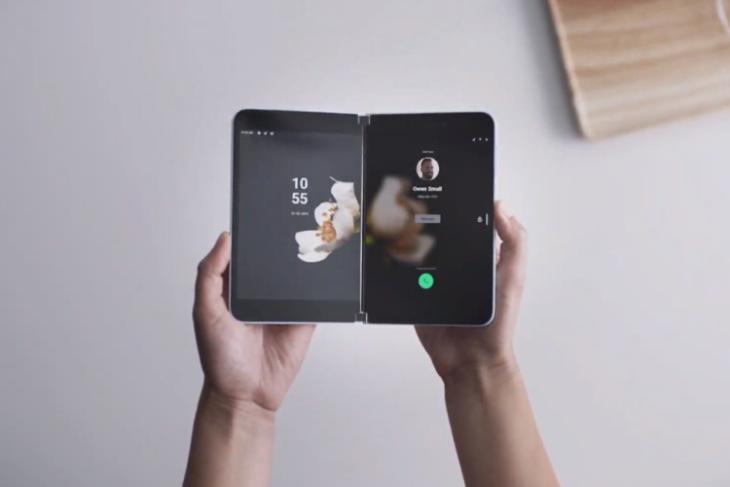 While Microsoft may have delayed its foldable PC plans, we recently learned that the company still aims to launch its Android-powered dual-screen smartphone – Surface Duo later this year. Microsoft simply showed off a prototype of the Surface Duo at its hardware launch event last year, with no concrete word on the official specs. But now, a fresh report with rumored specs of the Surface Duo has emerged online and it does not look pretty.

Windows Central today reports that the hardware specs of the Surface Duo have been finalized and Microsoft employees are testing the device – ironing out the kinks at the moment. One of the impressive things about the Duo will be its sleek design. It will be around 9.6mm thick when closed and only 4.8mm thin when opened in tablet form.

Surface Duo will feature two 5.6-inch AMOLED screens, one on each side, with huge bezels, 1800×1350 resolution, and a 4:3 aspect ratio. The bezels, as seen in the render above, make the device look like it’s from 2015. The top right bezel will come equipped with an 11MP camera, as per the report. It will be handy for both selfie and rear camera functions. You can see a camera sample from the same attached here:

As for the internals, Microsoft is not picking the latest flagship chipset. The title gives away the secret and it’s the Snapdragon 855 from last year that will power this dual-screen Android phone. It’s not even the overclocked Snapdragon 855 Plus. The chipset will most likely be coupled with 6GB of RAM and up to 256GB of storage, which is not expandable.

Surface Duo won’t come with 5G connectivity support in tow. Microsoft is said to have finalized the internal design a long time ago and there’s no space for a Snapdragon X55 modem onboard. You will find a physical fingerprint scanner on the side and a measly 3,460mAh battery to handle your daily needs. Now, that battery just feels too small to handle two screens.

Apart from this, the report mentions that Surface Duo won’t bring along NFC, wireless charging, and more to the table. There’s no word on whether this dual-screen phone is IPXX rated or not. It will run Android 10 out-of-the-box and will be upgradable to Android 11.

Reports of Surface Duo making a debut earlier than its scheduled late-2020 release have been floating around the web for a long time now. Windows Central says that the device is ‘almost ready’ for launch, so let’s wait and see if Microsoft talks about the Surface Duo at its developer conference, Build 2020, next week.