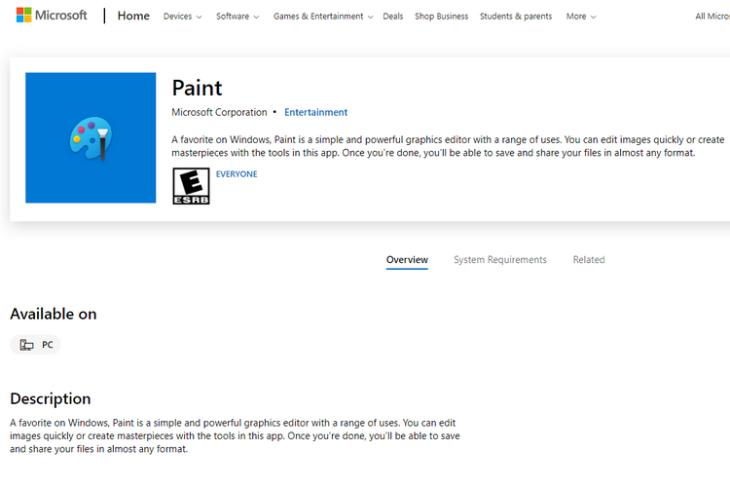 Microsoft has moved MS Paint to Windows Store with the latest Windows 10 Insider Preview Build 21354 in the Dev Channel. The app has also gained a new icon alongside this migration.

One Paint wasn't enough… for the happiness of @maryjofoley pic.twitter.com/gkXyly1X35

To clear out any confusion, this is the older version of Paint and not the newer Paint 3D app, which is also available on the Microsoft Store. The company tried to popularize its Paint 3D app to replace the much-loved MS Paint app over the past few years. But in vain. Microsoft is now traversing back on its decision, making Paint available in the Store for easier update rollout.

MS Paint is not the only software Microsoft is moving to its Store. Microsoft has swapped Snipping Tool with Snip and Sketch and it will now exist in the company’s app store. As a result, the Snipping tool will no longer be available in fresh installations. Users will have to download Snip and Sketch from the Store.

“Because we’re combining both Snip & Sketch and Snipping Tool, Insiders who previously did not have Snip & Sketch installed will see Snipping Tool removed after updating to this build and will have to go and install Snip & Sketch from the Store to get it back,” wrote the company in its blog post.

Apart from these changes, the new Insider build comes with new personalization options for news and interests on the taskbar, improvements to display and camera settings, and more. You can check out the entire list of changes from the Windows Insider blog post here.

Top 7 Free MS Paint Alternatives You Can Use

Next Major Windows 10 Update to Include a Better Screenshot Tool