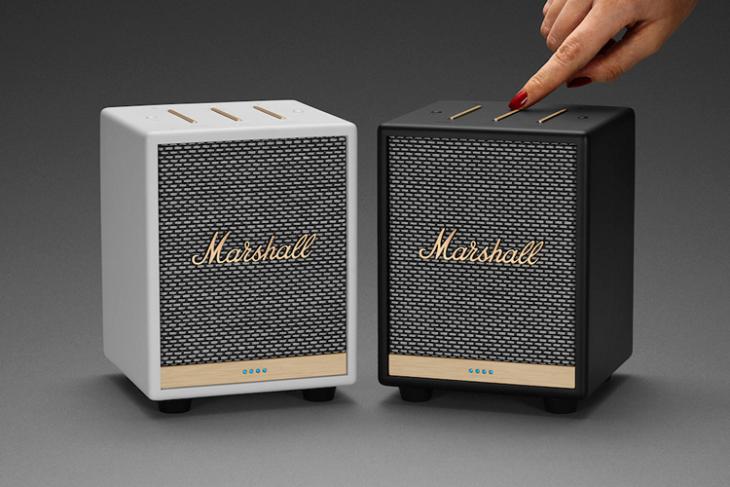 Swedish audio equipment manufacturer, Zound Industries, has launched a new Bluetooth speaker that comes with built-in support for Amazon Alexa and Apple AirPlay 2. Called ‘Marshall Uxbridge Voice‘, the device is described by the company as a “compact sonic powerhouse” that combines contemporary technology with iconic Marshall design to deliver hard-hitting sound while retaining a classic look.

The Marshall Uxbridge Voice comes with a $199 (around Rs. 15,000) price-tag and is available in two color options: Black and White. It is scheduled to start shipping from April 8th. The company is also planning to add a Google Assistant-powered model to the lineup on June 11, but there’s no word on how it will be priced or if it will differ in any significant way from the Alexa-powered version.

In terms of hardware specifications, the Uxbridge Voice will have one Class D amplifier with 30 watts of power and an operating frequency range of 54-20,000 Hz, but there’s no word on the actual drivers powering the device. Connectivity options will include Bluetooth 5.0 and Spotify Connect alongside AirPlay 2, making it the first device in the Marshall lineup to support Apple’s streaming technology. The device also comes with a supporting app that can be found on both the Google Play Store and Apple’s App Store.

Unlike other devices in the Marshall lineup, the Uxbridge Voice comes with physical controls that include a play/pause button and volume rockers with bass and treble controls. With privacy continuing to remain a major concern for IoT devices, there’s also a separate button to disable Alexa’s far-field microphone.