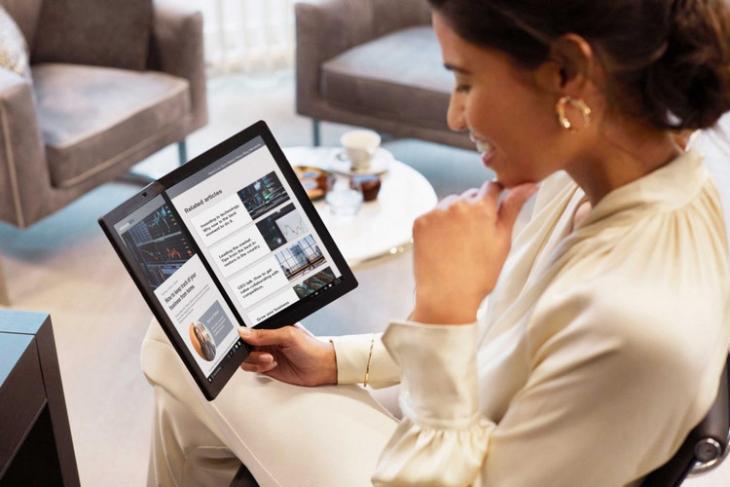 Lenovo has finally launched the world’s first full-fledged foldable PC. Called the ‘ThinkPad X1 Fold‘, the device was originally unveiled at CES 2020, and promises to usher in a whole new computing category. Alongside the revolutionary new product, Lenovo also unveiled the ‘ThinkPad X1 Nano‘, described by the company as its lightest ThinkPad ever.

The highlight of the Lenovo ThinkPad X1 Fold is its folding display that the company says will “redefine how we engage with technology”. The device features a 13.3-inch flexible QXGA (2,048 x 1,536) touchscreen OLED display with a 4:3 aspect ratio, 300 nits peak brightness and 95% coverage of the DCI-P3 color gamut. The laptop supports Dolby Vision and is powered by Intel’s penta-core i5-L16G7 processor with integrated Intel UHD 11th-gen graphics. There’s also 8GB of LPDDR4X 4,267MHz RAM and up to 1TB of PCIe-NVMe M.2 SSD storage.

Other hardware components include a 50Wh battery that the company claims can last up to 8.5 hours on a single charge. The device charges through an USB Type-C port and supports 65W fast charging. Wireless connectivity options include Wi-Fi 6, WLAN 802.11ax, Bluetooth 5.1 and 5G sub-6GHz with 4G LTE (CAT20), while wired connectivity options include 2x USB 3.2 Type-C Gen-2 ports. The device also ships with a Dolby Atmos speaker system for an enhanced audio experience.

The Lenovo ThinkPad X1 Fold is now up for pre-order in the US at a starting price of $2,499 (~Rs. 1.8 lakh). It will start shipping in the coming weeks. There’s no word on when it will be launched in global markets.

Described by Lenovo as its lightest-ever ThinkPad laptop, the X1 Nano weighs just 907 grams and measures 292.8mm x 207.7mm x 13.87mm. It features a 13-inch 2K touchscreen display (2,160 x 1,350) with 450 nits peak brightness and 100% coverage of sRGB color gamut. Like the X1 Fold, it also supports Dolby Vision. The X1 Nano is powered by up to 11th-generation Intel Core-i7 processors with Intel Iris Xe graphics. It can be configured with up to 16GB of LPDDR4x RAM and up to 1TB PCIe SSD for storage.

The ThinkPad X1 Nano sports a 48Wh battery that the company says can last for up to 17.3 hours on a single charge. Like the X1 Fold, it too charges via a USB Type-C port at 65W. It also comes with a Dolby Atmos speaker system and four 360-degree microphones. Connectivity options include 2x Thunderbolt 4 ports, 1x 3.5mm combo audio socket, Intel Wi-Fi 6 AX201 card, 802.11ax, LTE 5G CAT20, LTE 4G CAT9 and Bluetooth 5.0. It can be ordered with either Windows 10 Pro or Ubuntu.

The Lenovo ThinkPad X1 Nano is priced starting at $1,399 (~Rs. 1 lakh) in the US and is expected to go on sale in Q4, 2020. It will be offered in a single Black color with an optional carbon fiber weave top cover. Again, there’s no ETA for a global launch.