There was once a time when smartphones were a luxury; now they are a necessity. Almost everywhere you look you will find somebody casually swiping through their screen. People have incorporated these gadgets in such a way into their lives that a day without a smartphone might be hard for some to get through. A phone is no longer looked at as a device just to make and receive calls but more as an essential to do more than anybody had ever imagined.

With time as the smartphone market has grown and developed, so has people’s awareness and involvement in it. In today’s day and age you are not going to find somebody who is just blindly going to buy a phone. Everyone looking to buy one goes through the same process, reviews practically the very same things. Screen size, battery, OS, Memory, Megapixels, it’s almost like a checklist that every phone is made to go through.

While we agree that these are all critical things, today we would like to direct our readers to consider another important factor which most people completely ignore, the screen type of a smartphone. It is something so important to your device but is also very easily overlooked when going through that list of specifications. The main reason for this ignorance being that not many people know the different screen types, their benefits, and their shortcomings. So, today we bring you a comprehensive study about the three major types- LCD, OLED and AMOLED screens.

LCD stands for Liquid Crystal Display. As you may have known LCDs have been around for their fare share of time and deservingly so. An LCD is made up of some liquid crystals that get illuminated by a fluorescent backlight. 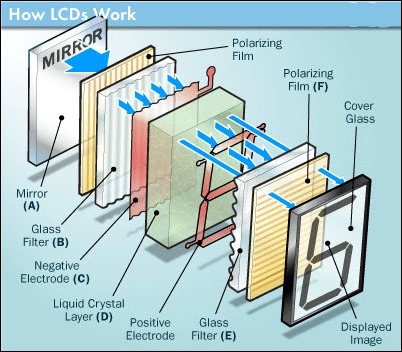 There are mainly two types of LCD displays used on smartphones:

OLED stands for Organic Light Emitting Diode. It is a thin-film display technology that contains OLED, an organic material which emits light when current is passed through it. OLEDs display much better blacks and consume less power when displaying darker colors since OLEDs are always off unless electrified individually.

There are primarily two types of OLEDs:

PMOLED: Passive Matrix Organic Light Emitting Diode uses a simple control scheme in which each row in the display is controlled sequentially. PMOLEDs are easy and cheap to fabricate but they are not efficient and their lifetime is usually less. They are typically used in smaller displays of up to 3 inches.

AMOLED: Active Matrix Organic Light Emitting Diode is mainly driven by a TFT, which contains a storage capacitor and can hence support larger displays. AMOLED displays have no size restrictions and work on the same fundamental principles of an OLED display.

AMOLED or Active Matrix Organic Light Emitting Diode is more of a step forward from the OLED display technology. TFT technology is very crucial to AMOLED. An active matrix of OLEDs are deposited on a TFT plane which activates on receiving electrical currents, these TFT arrays act as switches for each pixel and also contain the storage capacitor which allows for larger displays.

Typically an AMOLED display would consist of two TFTs at each pixel, one to start and stop the charging of storage capacitors and the other to provide a steady voltage of current to the pixel.

LCDs have been around for a while now while AMOLEDs are currently the new play things on the market. AMOLED is essentially a type of OLED and a better version of OLED so there is no question there as to which one is better. The real question arises on comparing LCD to AMOLED. Which one is better than the other since they both seem to have their own pros and cons. Honestly, in our opinion AMOLED beats LCD display on any given day. It offers a better picture quality, faster refresh rates, higher contrast, more brightness, higher resolution, better viewing angles and it’s also more flexible and lightweight.

SEE ALSO: SSD vs. HDD: Which One is Better and Why?

The only major downfall it has is that pesky display under direct sunlight which too is being addressed by the recently released Super AMOLED display. So, it is not a question of which one is better but more of a question of by what margin. We hope that the next time you review a smartphone you won’t have to ignore the type of display and would instead factor it in while making a better choice.

POLED vs OLED: What Are The Differences?

What is WiFi 6? Everything You Need to Know

Apple Could Ditch Samsung With Its Own MicroLED Displays for Apple Watch, iPhone