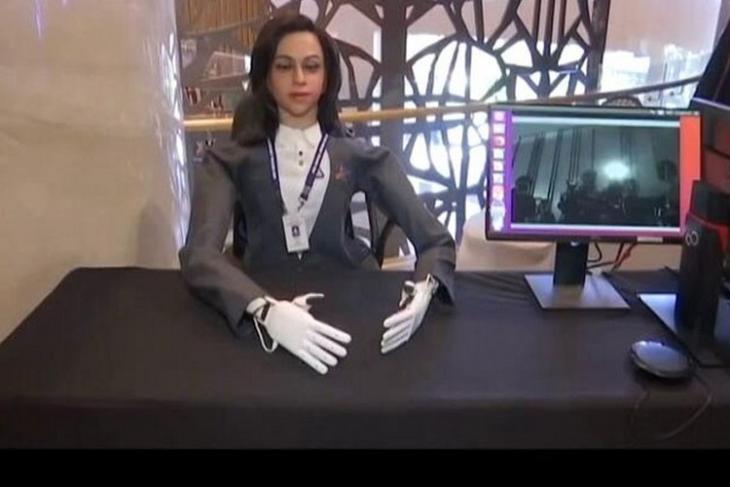 The Indian Space Research Organization (ISRO) is planning to send its first manned mission to space in December 2021, but before that, it is apparently sending a half-humanoid robot to space later this year. Called ‘Vyommitra’ (Friend in Space), the so-called ‘lady-robot’ will be one of the payloads aboard the unmanned ‘Gaganyaan’ spacecraft when it takes off in December 2020. The name of the humanoid is a combination of two Sanskrit words, ‘Vyoma’, meaning space and ‘Mitra’, meaning friend.

Presenting the humanoid at the inaugural session of ISRO’s “Human Spaceflight and Exploration — Present Challenges and Future Trends” in Bengaluru on Wednesday, the agency’s chairman, K. Sivan, told reporters that it will simulate human functions in space and also interact with the environment control life support system. According to him, “It will be simulating exactly the human functions there (in space). It will check whether the system is right. This will be very useful to simulate, as if a human is flying”.

In the run up to the first Human Space Mission by India at @isro … 'Vyommitra', the humanoid for #Gaganyaan unveiled. This prototype of humanoid will go as trial before Gaganyaan goes with Astronauts. #ISRO pic.twitter.com/pnzklgSfqu

Sivan also said that the human spaceflight venture, ‘Gaganyaan’, is “on schedule” for December 2021 and the agency will be conducting a series of tests this year in preparation for the event. “We are on schedule. We are going to do lots of demonstration tests this year. This year end we will send our unmanned mission and the half-humanoid you have seen today is going to fly in it”, he said.

Vyommitra speaks in a human voice and, will apparently be talking to astronauts and answering their queries in space. In a demo in front of reporters at the event, the robot said: “Hello everyone. I am Vyommitra, the prototype of the half-humanoid, been made for the first unmanned Gaganyaan mission … I can monitor through module parameters, alert you and perform life support operations. I can perform activities like switch panel operations…”.

The Indian space agency is not letting the failure of its Chandrayaan-2 mission to thwart its ambitions of becoming a space superpower in the coming decade. The organization already has plans for a mega 2020 with the Chandrayaan-3 mission, which got the green signal from the government earlier this month.