Since its launch back in February 2019, Apex Legends has been one of the most popular Battle Royale games amongst gamers. Respawn has been quite aggressively pushing new updates to the game regularly and releasing Battle Pass seasons since one month after its launch. So, today the developers dropped the update for its fifth season. Although this update brings a ton of new things in the game along with the new legend, Loba, however, it also brought one of the most annoying bug of all time.

Now, I downloaded and installed the update as soon as it came and waited eagerly to enjoy playing with Loba. So, after waiting for Origin to download over 40 gigs of data and installing it, I excitedly launched the game.

At first, the game took more time to load the game data than it generally should. However, the main problem started when I went to my friends list page. As soon as I entered the segment, the game crashed without any error or anything. Since this, the game continued to crash every time I opened it and that frustrated the hell out of me.

So, I did some digging and found many players are experiencing the same issue right after the latest update. Going through Reddit, there also I found some of the players complaining about this very thing. However, going through the comments under the aforementioned thread, I found the fix to this problem and it did work for me like a charm.

So, here’s how you can fix this annoying crashing bug. 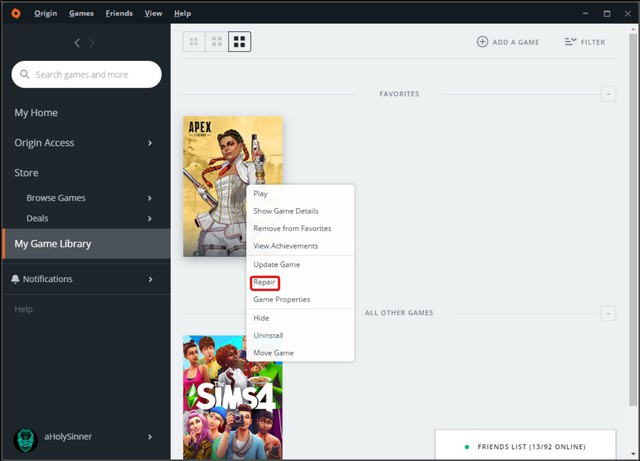 Now, after you click the “Repair” button, the client will start to verify the game files that are in your device. This might take some time as the program needs to verify over 40 GB of data. After verifying the game files, in my case, the client started to download an additional 16 GB of data, that took about 45 mins to complete.

However, after this download, when I launched the game, it ran perfectly as it should with no signs of crashing or issues with loading data. It seems like the latest patch does not properly install the update, leaving out over 16 GB of game data.

So, if you are facing this very same issue, there is a high chance that this fix will work for you, as it did for me. Go on and give it a try and if it works, you can thank me in the comments down below. Happy gaming!