The menu bar is one of the most defining features of a Mac, just like the Apple logo present on the back of every Apple machine. The menu bar plays a major role in providing a unified user experience inside Mac’s operating system. Doesn’t matter in which app you are, the menu bar holds all the settings and controls for the apps, so that you exactly know where to look for them. On the far right, the menu bar also holds quick access icons for certain native apps such as WiFi, volume, and clock among others. This feature is also utilised by various third-party apps as they can also put their own quick access icons on the menu bar. However, if you are anything like me, you will find that very soon the menu bar becomes cluttered owing to the presence of too many third-party icons. No-one likes a cluttered desktop, and if you are also struggling with keeping your menu bar clean, here’s how you can hide menu bar icons on your Mac:

Vanilla is a very simple app which allows you to hide menu bar icons on your Mac. When launched, the app places its own quick icon on the menu bar. When you click on its icon, it will show an arrow which will hide all the apps which are present on the left of the app’s icon. The only drawback of the app is that it can only hide the third-party app icons on the menu bar while the native app icons remain unaffected. Still, the app is very good at what it does. If there are any app icons which are present on the right of the Vanilla’s icon, you can just hold the command button and drag the said icon to the left of the vanilla app.

The app is free to use with a pro version which brings some extra features. The unlocked features include the ability to remove icons forever, automatic hiding of icons after a certain period of time has elapsed, and to automatically launch Vanilla when you log in to your computer. But even if you don’t decide to buy the pro version, the free version is good enough for most of your needs. 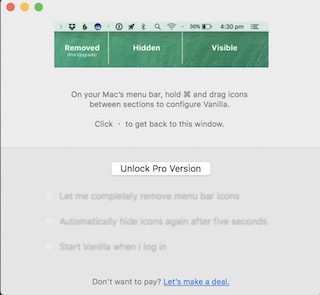 Vanilla is a good app, but it still leaves some features in the desired list. If you really want to command the way your menu bar handles the app icons, there’s no better app than Bartender. Although it is a costly app, it deserves every penny. The biggest feature of the Bartender is that not only it can hide the third-party app icons, but also the native Apple app icons. The app basically creates a hidden sub menu bar which holds all the app icons and can be accessed just by clicking on the Bartender menu bar icon.

If you really want to clean your menu bar and don’t want to see any icon there, you also get the ability to hide Bartender’s app icon too. When the app is hidden, you can access the sub menu bar by just hitting the user customisable key. I really love this feature as this allow me to keep a clean menu bar. The app also has an inbuilt search feature allowing you to quickly search for any app running in the menu bar. This feature is especially useful if you like to keep too many apps in the menu bar. If you are serious about managing your menu bar and keeping it clean, this is the app to get.

Note: The hiding of the native app icons is currently not working on macOS High Sierra. The feature will roll out in future updates of the app.

Hide Menu Bar Icons to Clean Things Up in macOS

The menu bar is an important and integral part of the macOS. It’s the one thing which is constant doesn’t matter where you are inside the operating system. However, depending on the number of apps you use which utilise the menu bar icons, it can fill up and become crowded easily. Use the above two apps to organise and hide icons to give your menu bar a clean look. Also, do tell us about your favourite menu bar apps in the comment section below.