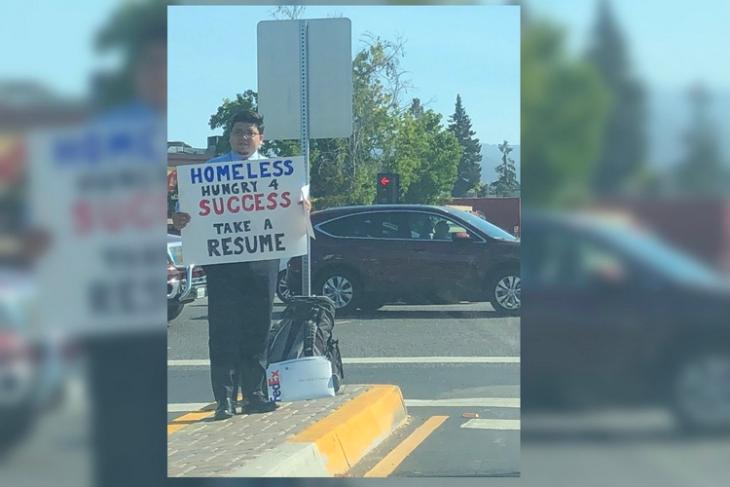 A homeless web-developer in the US is reportedly being flooded with job offers after a photo of him holding a ‘Homeless’ sign went viral on social media over the weekend. The photo shows 26-year-old web developer, David Casarez, holding up a sign that read ‘Homeless, Hungry 4 Success, Take a Resume’.

According to reports, Casarez on Friday stood at a busy street corner in Mountain View, California, with the cardboard sign and resumes in hand. He’d been apparently been standing for a couple of hours when a woman named Jasmine Scofield noticed his unusual plea and stopped to take his photo. She then uploaded the photo along with Casarez’s resume on Twitter, and the post soon went viral with tens of thousands of retweets by the end of the weekend.

After the above tweet went viral, dozens of tech companies, including Silicon Valley giants Google, Netflix and LinkedIn, have apparently contacted Casarez with interview offers. It’s not entirely clear, though, if he has actually received concrete job offers from any of the above companies.

Speaking to NBC, Casarez expressed his surprise at the turn of events, saying he was blown over by the response. According to him, “I’m just completely blown out, receiving so many e-mails of support … People have shown support form all over the world, not just here in the Bay Area — people from Japan, Saudi Arabia, Canada. It’s been amazing”.

Casarez reportedly moved to California from Florida in 2014, hoping to strike it big in the Silicon Valley with his own tech company. However, he fell on hard times after his startup went bust, and became homeless the following year when the car he was living in was repossessed because of non-payment of dues. After all his traditional plans to get a job failed to yield any result, he hit upon this decidedly low-tech idea to get his dream high-tech job.