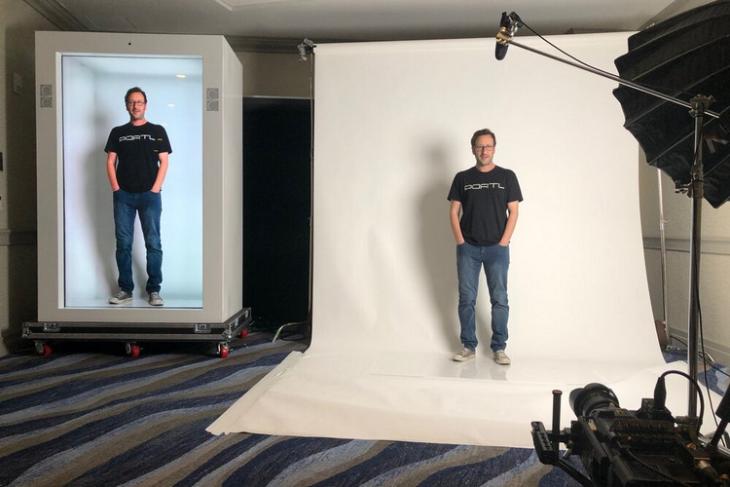 Teleportation, the holy grail of sci-fi films, may remain in the realms of fiction for now, but a Los Angeles-based company claims it is all set to bring the next best thing to consumers sooner rather than later. Portl Inc., a tech startup that specializes in holography and associated technology, has created what it calls the world’s first single passenger ‘Holoportation Machine’.

Called ‘Holoportl’, the device is a phone-booth-sized machine that can beam live full human-sized holograms into your living room. According to the company’s founder, David Nussbaum, the machine allows anyone to ‘beam’ from anywhere to everywhere in real time. “The person being beamed will have the ability to see, hear and fully interact with their global audiences in 4K holographic resolution”, the company claims.

Each Holoportl is seven feet tall, five feet wide and two feet deep, and allows anybody equipped with a standard video camera and a white background to send a moving, talking hologram to the machine in real time. “We say if you can’t be there, you can beam there”, said Nussbaum. Pricing starts at $60,000 (~Rs. 45 lakh), but Nussbaum expects it will drop going forward. The company also plans to introduce a smaller tabletop device with a lower price-tag early next year.

Besides live holoportation, the PORTL machines can also film, produce and edit any content or subject matter and play it back on a loop or through motion activation as a hologram movie. Each unit has a transparent 4K projection window along with stereo speakers with volume control. There’s also an embedded audience-facing camera for telepresence, security, motion detection and more. It also comes with an optional touch-screen and draws power through standard 15A outlets. You can check out more information on the official Portl website.