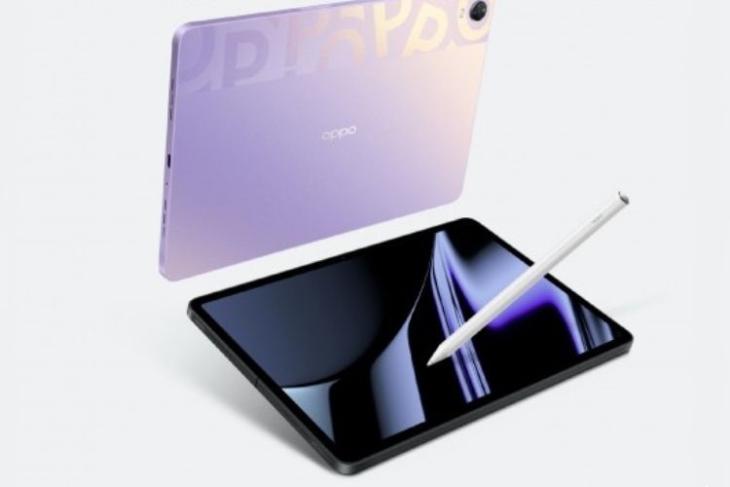 Oppo has made numerous headlines for its first-ever Android tablet, now confirmed to carry the Oppo Pad epithet. The tablet will finally be launched on February 24 alongside the Oppo Find X5 series. And ahead of the official launch, the company has given us a look at its design and key specifications.

Oppo has shared a teaser on Chinese microblogging platform Weibo, which shows that Oppo Pad will feature a matte back panel that will house a single rear camera. The rear panel will also boast two Oppo brandings; one would be small and simple in the middle, while the other one would be a big one running on the left side. If you are wondering where have you seen something like this, here’s a reminder: the Realme 8 Pro!

The front has thin bezels, although, they are quite visible. The tablet is also seen with a white-colored Oppo stylus, which looks similar to the Apple Pencil. Other details include a USB Type-C port, a power button on the top portion, and a quad-speaker setup.

The Oppo Pad is seen in grey and purple colorways with a dual-tone finish. From the looks of it, it looks a lot like the Realme Pad but with some emphasis on branding.

As for the specs sheet, most of the features are still behind the veil. However, rumors suggest that the Oppo Pad will feature a 10.95-inch LCD display with support for a 120Hz refresh rate. Oppo has, however, confirmed that its first tablet will be powered by a Snapdragon 870 chipset, and we can expect a mid-range sub-Rs 25,000 price tag.

A 13MP rear camera and an 8MP front camera are also expected to be in tow here. Additionally, the tablet is confirmed to come equipped with an 8,360mAh battery. You are also likely to find support for 33W fast charging onboard. The Oppo Pad will run ColorOS for Pad based on Android 12.

The Oppo Pad will launch alongside the flagship Oppo Find X5 Pro series in China on February 24. So, stay tuned for more details on these upcoming Oppo devices.