Skip to content
Home News Here’s the First Image of the Black Hole in the Center of the Milky Way! 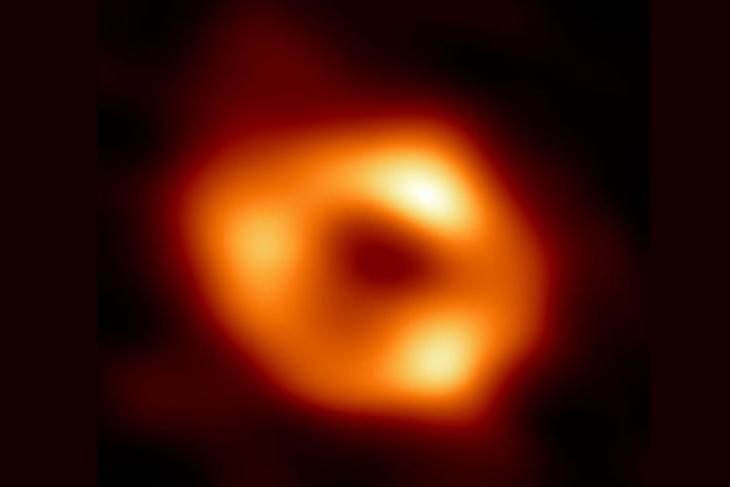 If you are an astronomy buff, I’m sure you already know about the supermassive black hole, discovered by the Event Horizon Telescope (EHT) team back in 2019. Now, the global research team has managed to capture the first image of a supermassive black hole that resides at the center of our very own Milky Way galaxy. Check out the details below to know more about it.

Dubbed the Saggitarius A* or Sgr A* (pronounced as “sadge-ay-star”), the supermassive black hole was previously known to exist as scientists saw many stars orbiting “something invisible, compact, and very massive at the center of the Milky Way.” Now, the image of the black hole (header image) provides the first direct visual evidence of its existence. It was recently published at a press conference hosted by the US National Science Foundation and the Event Horizon Telescope Collaboration in Washinton DC.

The Sgr A* is located around 27,000 light-years away from our planet. Although it is four million times more massive than our Sun, scientists could not capture the black hole due to the sheer distance. While both images of the black hole appear similar, it is said that the Sgr A* is “more than a thousand times smaller and less massive than M87*.”

To capture the image, the EHT Collaboration team combined eight existing radio observatories around the world to create a virtual Earth-sized telescope, observed the Sgr A* on multiple nights, and collected data for hours in a row.

Furthermore, imaging the Sgr A*, as per the scientists, was more difficult as compared to the M87*, which is the previously-captured image of the black hole of the Messier 87 galaxy. It is due to the fact that the gas around the bigger M87* black hole orbits at much slower speeds as compared to the gas of the smaller Sgr A* black hole. One of the EHT scientists, Chi-kwan Chan says that it is “a bit like trying to take a clear picture of a puppy quickly chasing its tail.”

To overcome these issues, the EHT Collaboration team, which included 300 scientists and 80 institutes, developed new, sophisticated tools that accounted for the gas movement of Sgr A*. As per the press release, the team worked for 5 years, using supercomputers to combine and analyze data, to get the image.

Now, with the image of the Sgr A* and the M87, scientists will be able to compare the two black holes and study the differences between them to uncover new astronomical discoveries. So, what do you think? Let us know your thoughts on the first image of the Sgr A in the comments below.