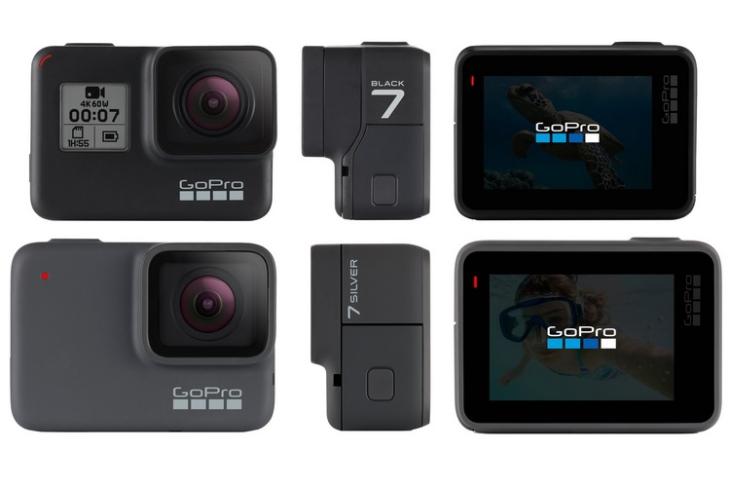 Earlier this month, live images of a new action camera from GoPro called the Hero 7 were leaked, alongside reports that the company might launch the new device later this month. Famed leakster, Evan Blass has now tweeted a high-quality image of the Hero 7 which depicts the upcoming action camera in silver and black color options, giving us our first detailed look at GoPro’s next offering.

Interestingly, the design of the Hero 7’s black variant differs from that of its silver version, which appears to have a larger build with a bigger display and a circular red indicator light, compared to an arc-shaped indicator at the edge of the black version.

More importantly, the Hero 7’s black variant features a square display beside the camera lens to display information such as recording status, battery life, shooting mode, etc. Design wise, the Hero 7’s black variant is quite similar to its predecessor, the Hero 6, which also shared the same two design with a monochrome screen on the front and a touch-sensitive display on the rear side, down to the side-mounted button.

On the other hand, the Hero 7’s silver edition lacks the monochrome front display present on the action camera’s black variant, however, the silver version appears to have a larger rear screen, thanks to a bigger build. The previous leak, which revealed in-store images of the upcoming action camera, also showcased a white variant which looks identical to the Hero 7’s silver variant.

The leaked image also discloses that the Hero 7 will be waterproof up to a depth of 10m, however, no further details about the device’s imaging capabilities and features are known as of now, neither is there is any information regarding a release date and pricing. So, are you excited about GoPro’s upcoming lineup? Let us know in the comments down below.