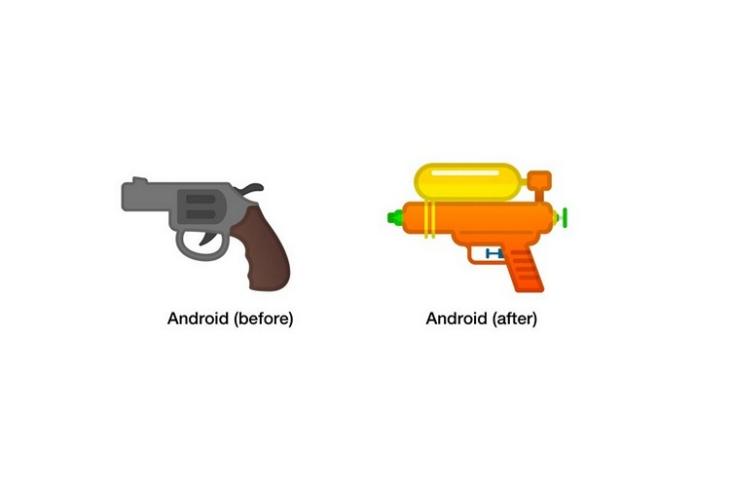 Google has now followed the lead of Apple, Samsung, Twitter and WhatsApp in changing the pistol emoji on Android devices to a harmless, bright orange water gun.

This is certainly not the first time the company has updated its pistol emoji, but previous iterations all involved realistic guns, including revolvers and muskets. According to Emojipedia, the company was non-committal about changing the realistic gun emoji back in 2016, when Apple took the lead to change it to a fluorescent green water gun.

However, with more and more tech giants starting to – in a not so subtle manner – support gun-control in the aftermath of several tragic mass-shootings in the US, Google has now seemingly decided to join the party and throw its weight behind the gun-control movement that seems to be gathering momentum by the day.

Now that Google has changed it gun emoji to roll with the times, Facebook and Microsoft are the only two remaining US tech behemoths that are still holding on to the older, realistic gun emojis that depict actual pistols or revolvers. However, while Facebook has already announced that it will soon ditch its gun emoji in favor of something more appropriate, Microsoft reportedly declined to comment to Emojipedia on the issue.

Gun-control has been one of the most divisive and politically-charged issues in the US over the years as the number of mass-shootings and resultant fatalities have continued to rise in the country.

While most corporate houses have traditionally kept themselves out of the debate, the mass-shooting at the Stoneman Douglas High School in Florida earlier this year and the ensuing activism from the country’s high-school students has emboldened some of these tech giants to start showing solidarity with the victims.