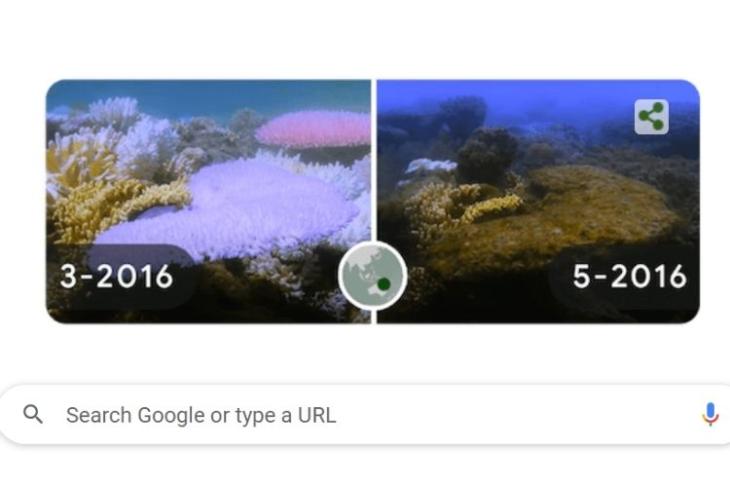 It’s Earth Day 2022, and to celebrate this, Google has introduced a new Google Doodle, just like last year. But, this time it hasn’t gone for positive imagery that gives us all a positive message to care more for the environment. This year, Google shows us the harsh reality of how we have poorly impacted the environment, which forces us to reflect on the actions we take.

Google has shown the climatic change over the years via time-lapse videos created from satellite imagery and photographs from The Ocean Agency.

The first imagery is a look at the glacier retreat at Mount Kilimanjaro in Tanzania, Africa. This time-lapse includes the period from 1986 to 2020 with each image taken in December every year.

The second GIF also showcases a glacier retreat in Sermersooq, Greenland. This has been recorded between the years 2000 and 2020. Another one gives us a glimpse of the Great Barrier Reef coral bleaching on Lizard Island in Australia. This one showcases the time period between March 2016 and May 2016.

The last GIF shows how the Harz Forests (in Elend, Germany) have been destroyed from 1995 to 2020, mainly due to the bark beetle infestation due to rising temperatures and severe drought. You can have a look at all the GIFs right below.

Climate counselor Lesley Hughes (a professor of biology at Macquarie University in Sydney) commented on these imageries and stated, “Our physical and biological world is transforming before our eyes and that’s what these images are emphasizing and so there’s absolutely no time to waste.“

Google persuades people into thinking more about the environment by showing disturbing images of the impact our practices have had. This is contradictory to last year’s Earth Day Google Doodle, which positively tried to make an impact. You can check out last year’s Earth Day Google Doodle here. The company, via its Google Doodle page, goes on to say, “Acting now and together to live more sustainably is necessary to avoid the worst effects of climate change.”

And rightly so, it’s time for us to finally follow sustainable practices to protect our environment and not damage it further. What are your thoughts on this? Let us know in the comments below.