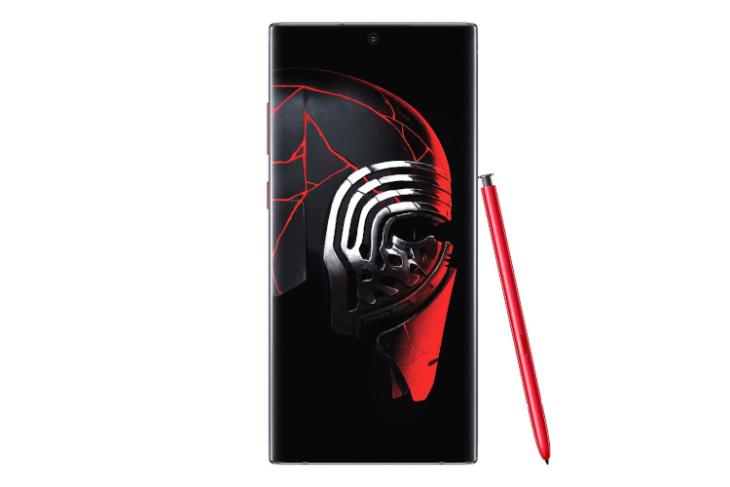 A new Star Wars movie is coming, and as has been the case with most movies in the franchise over the last few years, there’s a tie-in tech product to go along with it. This time around, Samsung is making a special edition Galaxy Note 10+ on a Star Wars theme, and let me just say, it looks pretty awesome.

The Star Wars Limited Edition Galaxy Note 10 is stealthy black all around, and the South Korean giant has gone with red for the S-Pen, giving me very Darth Vader/Kylo Ren feels when I look at the phone. There’s also a splash of red around the rear camera module.

On the back, the phone will also feature the Star Wars logo, and the logo for the First Order, alongside the Samsung logo. There’s a lot of logos, overall, but that black and red colour scheme trumps everything else for me.

The Special Edition Galaxy Note 10+ doesn’t stand alone in its quest to defeat the rebel alliance though, in fact, Samsung is packing in a pair of Galaxy Buds in black, with the inside of the case painted red to go with the overall theme of the smartphone. There’s also an embossed leather cover in the bundle, along with a metallic badge.

Samsung will be selling the bundle in limited quantities in a bunch of countries (India isn’t a part of them) for $1,300.

So, what do you think of the Star Wars themed Galaxy Note 10+? Let us know in the comments. By the way, did you watch The Mandalorian yet? I haven’t, but I’m hearing a lot of good things about it. Let me know what you think.

Galaxy Note 10+ Gets ‘A+’ Rating From DisplayMate; Sets 13 New Records