Nothing beats the feeling of holding a book in your hands and reading it, however, that is not always a viable option. Argue all you want about the merits of a paperback or a hardcover, the rise of eBooks was inevitable – the simple reason that eBooks work, and work so well is that they are instantly available, to anyone and everyone who has access to the internet.

We have mobile phones, laptops and even dedicated eBook readers these days; and for each of these, there has been an obvious rise in the number of applications that seem to offer eBook reading capabilities. We explore, in this article, some free eBook readers that are available for the Mac. 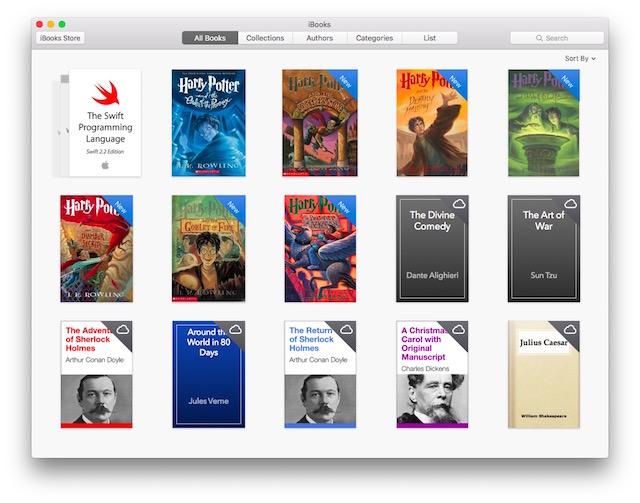 iBooks is Apple’s stock eBook reader app, and it is exactly what an eBook reader for a laptop should be. It has a clean UI, even in windowed mode. However, go into the full-screen view by pressing “Command + Option + F” and you will see just why this app is one of the most beautiful eBook readers available on the Mac. Your entire screen is dedicated to the eBook you are reading, and nothing comes in the way. It utilities the entire screen of your Mac to the best possible extent.

The fonts are nice and large, spacing is done very well, and it has four different themes you can choose from, depending on your mood or the time of the day. 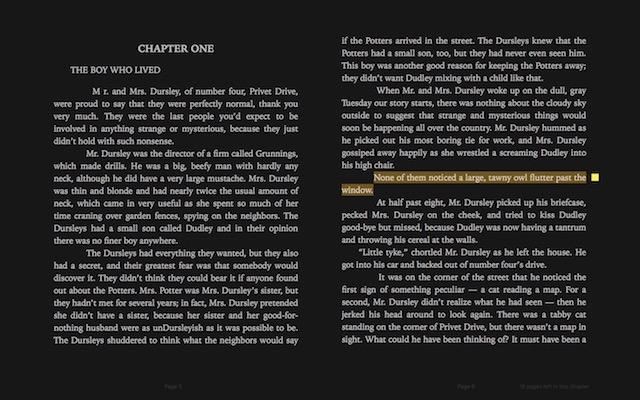 It allows text highlighting, underlining, adding notes and even sharing selected text. I dare you to highlight text on your Harry Potter paperback, purists. iBooks comes pre-installed on the Macbooks, so chances are, you already have it and you just use it.

I have read a lot about Calibre, so I decided to give it a try. As much as I love iBooks, I really wish they had implemented an auto-scroll function, and I was wondering if Calibre would offer that feature. The first thing I noticed as I installed – and then launched – Calibre, was the big splash image on my screen that made me feel like I was back to the apps of the 2010 era. But hey, if Calibre offers something great, I’m not one to whine about a splash image that vanishes in a second or two. 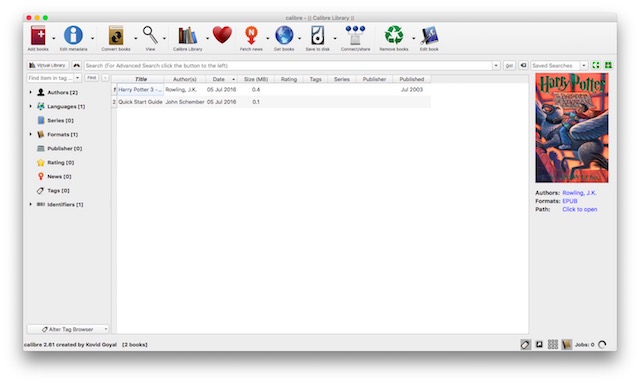 Oh, the UI! I have no idea why Calibre UI has no calibre (pun intended) at all. I would still have agreed to use it as my go-to eBook reader on the Mac, but it offers nothing useful to me. Sure, I can edit metadata for the eBooks I import into the app, but what use is that to me? I don’t need to change the cover for Harry Potter and The Prisoner of Azkaban, nor do I want to change the author’s name.

The thing that bugs me even more, if possible (and I didn’t think anything could) was the way Calibre opens eBooks. In a separate window with ugly looking icons on the sidebar. What in the world are those? Why would I want to use an app that looks straight out of an era I have no interest in returning to? 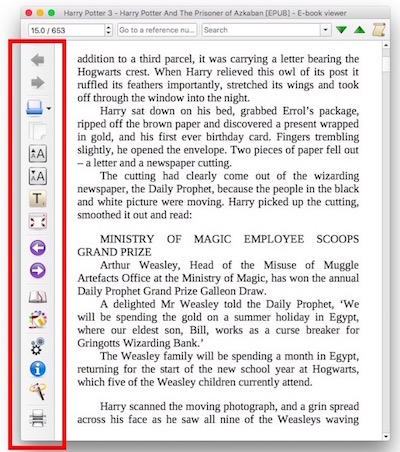 Not for nothing, though, am I usually lenient with software, especially free ones. I appreciate what the developer wants to achieve here, but it holds no importance for me, and for most people, I imagine.

The one good, useful feature that I found in Calibre was the ability to mark reference paragraphs; that should be helpful when making citations from eBooks. Not a feature I have any use for, but it’s a good feature to have in an eBook reader. 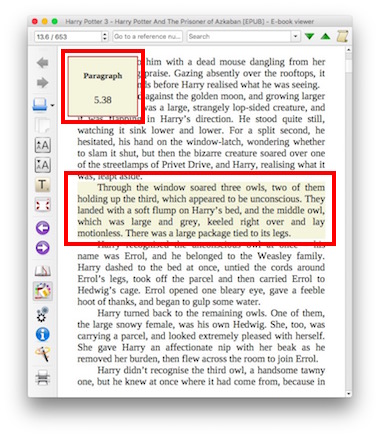 This one is available on the App Store, and is in many ways close to iBooks. At the very least, the UI is clean(er). 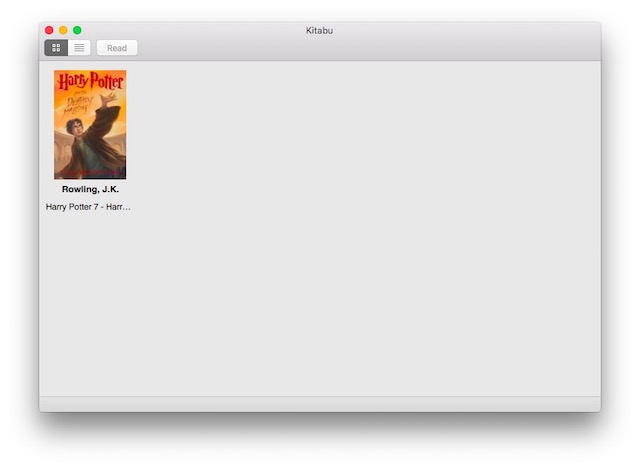 Now that’s the kind of UI I would like to see in an app that is meant to be used in 2016. Almost. Kitabu hits really close to the iBooks mark that I expect from eBook readers on Mac. It just misses out in a minor UI choice, and a rather irritating bug. Rest assured, said bug does not affect the overall usability of the app, but it’s difficult to un-see once you have experienced it, because it’s always there. Restarting the app doesn’t fix it (IT support cliché).

Let me expand upon the minor UI issue that I would rather not have faced: When I’m reading a book, and I go into full-screen mode, I expect all the UI junk to disappear (the way iBooks handles full-screen UI); on Kitabu, however, that top bar doesn’t ever go away. It’s not a big deal, but I would like an even cleaner UI, especially when the stock app already has it. 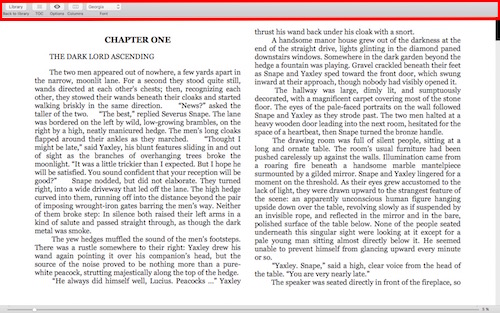 Also, the global keyboard shortcut to make an app go full-screen doesn’t seem to work with Kitabu, which is another big problem, because… well, it really should. That’s what I expect from applications on my Mac: they should just work.

The Readium Chrome App puts most of these apps to shame. It has a UI that is cleaner than both Calibre and Kindle, and it opens up almost instantly. 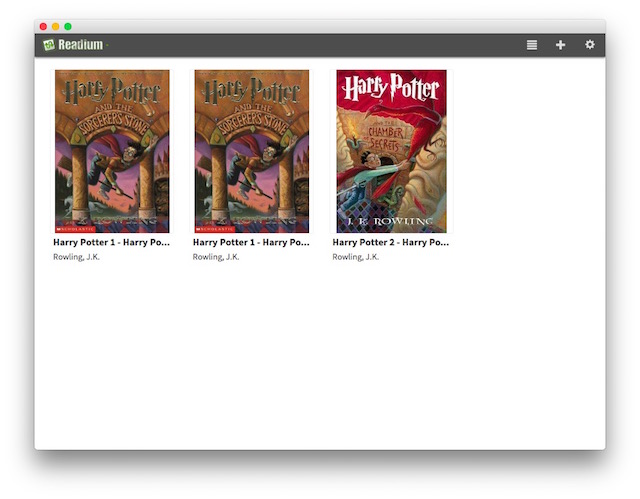 In terms of full-screen UI, Readium has the same issue that Kitabu had. That top bar just doesn’t go away, and Readium also doesn’t respond to the global keyboard shortcut to make an app go full screen. 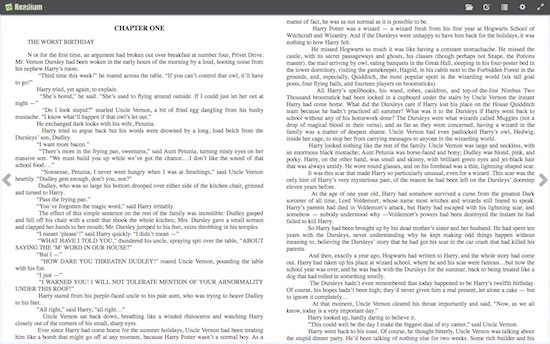 Readium deserves credit, though. It’s only 329KB in size and is much better as an eBook reader than almost every app on this list.

The Kindle App is an app that I have used on my Android device and discarded for Moon+ Reader, but I’m willing to give it another try on the Mac. At least the Library UI is decent on the Kindle app. Dark backgrounds and well arranged book covers look good. 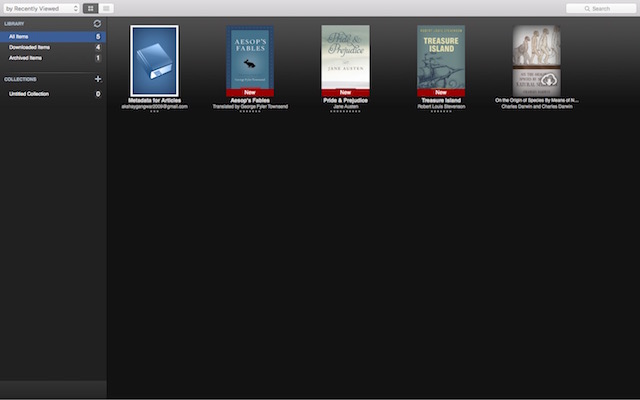 That’s all the good stuff, to be honest. Opening an eBook not purchased directly via Amazon is a nightmare on the Kindle app. I had to convert the file to a “Kindle supported format” before the Kindle App would let me open it, and even then, the scrolling is laggy and the over-all experience is not what I would expect from an eBook reader.

Oh, before I forget, Amazon lets you send documents to your Kindle devices and Kindle Apps directly by simply emailing the files to your Kindle account. Ok, it’s not exactly “simple”, but you get my gist. The happiness is short-lived, though. That email delivery only works on mobile devices, and is not available for Kindle on Mac. Awesome.

Get Reading on your Mac!

These were the 5 free eBook readers that I tried out and decided on sharing the wisdom about with all of you. If you’re looking for a free eBook reader for your Mac, look no further than the launchpad. iBooks is, in my opinion, the closest thing to a great eBook reader for Mac. Well, that’s what I think, share your opinions about the eBook readers I covered in this article and mention your favourites in the comments section below.