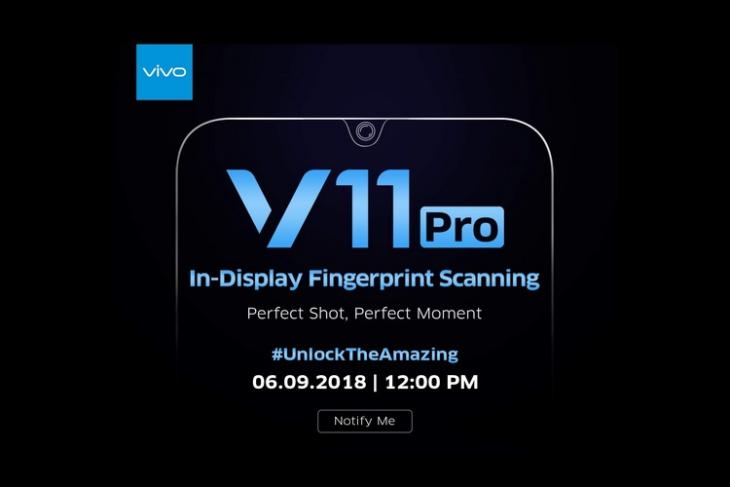 Vivo has been teasing the launch of a new smartphone in India for a while now, and recently even send out media invites for an event on September 6.

The company earlier this week even confirmed that the device will be the V11 Pro, but information about it continues to remain scarce. Now, however, both Flipkart and Amazon have both started teasing the device on their site, confirming rumors that it will, indeed, ship with an in-display fingerprint scanner as rumored.

Be picture perfect, always with the AI Dual Rear Camera in #VivoV11Pro #UnlockTheAmazing
____

According to unconfirmed rumors, the Vivo V11 will feature a 6.41-inch FHD+ display with an aspect ratio of 19.5:9. It is said to be powered by the Snapdragon 660 SoC, and will reportedly ship with up to 6GB of RAM and 128GB storage, which will be further expandable by up to 256GB with the use of a microSD card. As seen from the official tweet, it will also come with a minimal teardrop notch to maximize screen real-estate.

Imaging options will reportedly include a rear-facing dual-camera setup, including a 12MP primary sensor and a 5MP secondary sensor. The phone is also rumored to come with a massive 25MP front camera, although, there’s no confirmation about that. The V11 is said to ship with Android 8.1 Oreo with Vivo’s proprietary Funtouch UI laid on top. A 3,400mAh battery is expected to keep the lights on.

The upcoming Vivo may sport mid-range hardware, but it will certainly not come with a mid-range price-tag. The device will reportedly be priced at a whopping Rs. 32,990, which means, it will have to compete with the likes of the OnePlus 6 and the Asus ZenFone 5Z, both of which come with true flagship-grade hardware at similar prices. In fact, with the Poco F1, users can even get a blazing fast phone with the Snapdragon 845 at just Rs. 21,000.