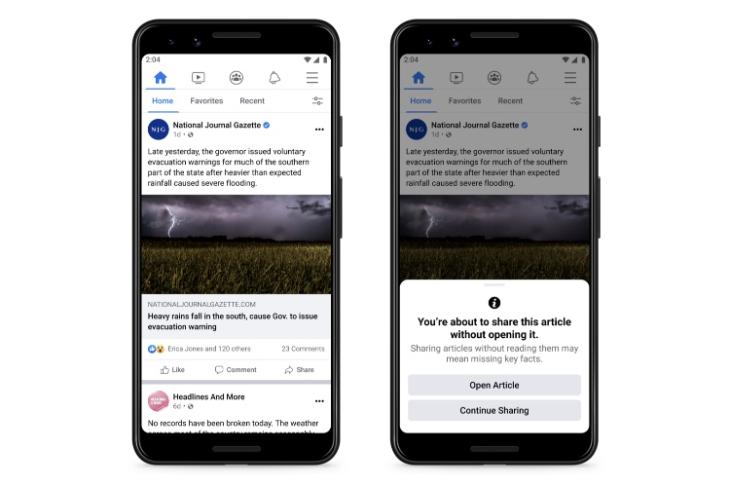 Facebook has long had a problem of misinformation. The social media platform is often ridiculed for it, but the company seems to be working on a new safeguard of sorts. Facebook is running a new test that will prompt users to read articles before sharing them on the platform, according to a tweet from the company. This is similar in idea to Twitter’s implementation of a similar feature last year, asking people to read articles before retweeting them.

Starting today, we’re testing a way to promote more informed sharing of news articles. If you go to share a news article link you haven’t opened, we’ll show a prompt encouraging you to open it and read it, before sharing it with others. pic.twitter.com/brlMnlg6Qg

With the new test, if a user is attempting to share a news article that they see on Facebook, the app will prompt the user to read the article before they share it. This way, Facebook hopes, more people will read news articles and get all their facts straight before sharing information on the website.

That said, the test won’t completely lock you out of sharing, either. In case you don’t want to read the article, or if you’ve read it somewhere else already, you can go ahead and skip the prompt’s warnings and simply share the article on your feed as well.

The new test is not live for a vast number of people right now. In fact, a Facebook spokesperson reportedly told The Verge that the company will be rolling out the test to about 6% Android users, globally. That’s not a big proportion of Facebook users by any means, but hopefully the test will be expanded to more users over time.

It’s currently unclear how effective this test will be towards curbing the spread of misinformation on the social media platform that has had multiple scandals including the infamous Cambridge Analytica scandal a few years ago. However, if Twitter’s implementation is any indication, Facebook’s test should result in slowing down misinformation on the platform as well.