The Eufy Genie comes in a nice white-blue box that’s just about the size you’d expect it to be. Opening it up, you’ll find the Eufy Genie staring right at you. Here’s everything inside the box: 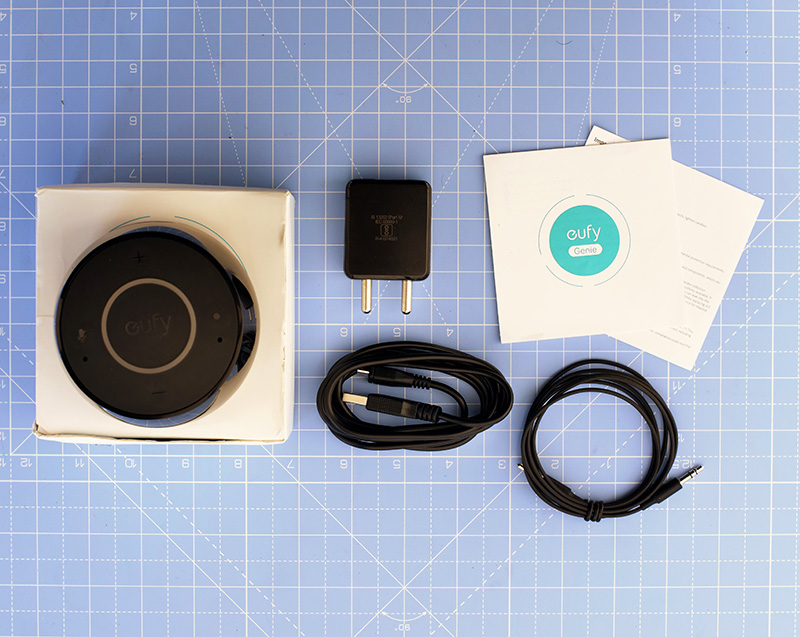 For a speaker that is basically an Echo Dot competitor, and that’s usually available for a markup that’s a lot lower than the Echo Dot, the Eufy Genie is surprisingly well built and designed.

Instead of the boxy, and honestly rather poor design of the Echo Dot, the Eufy Genie opts for a more curvy design with smoother edges, and even though its also built of plastic, it’s a very nice plastic build. It’s not close to the plastic you’d find on the Home Mini (Rs. 4,099), but it’s better than the Echo Dot’s plastic build. The top of the Eufy Genie packs in the volume up/down button, the action button, and the mute button, along with a light ring that wraps around the ‘Eufy’ branding in the middle. The entire top part of the Genie feels very well built, and has a rubberized feel to it which makes it that much better to use. 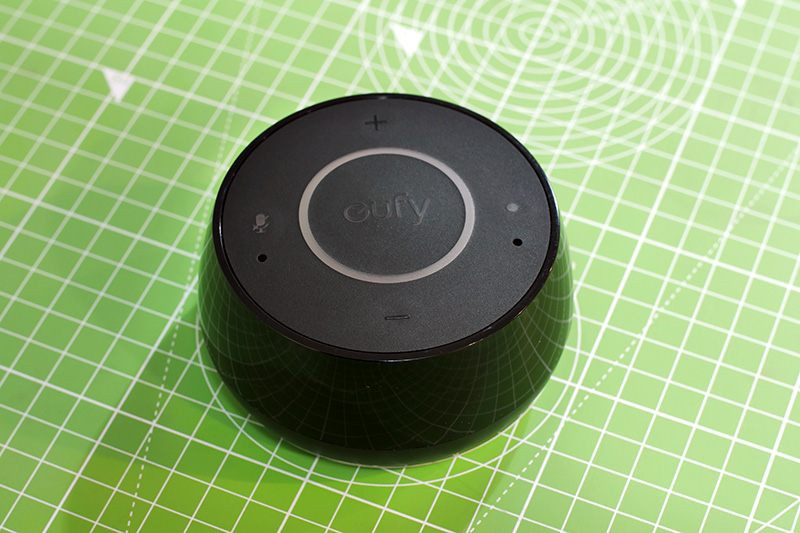 There are two far-field microphones (as compared to the array of 7 far field microphones on the Echo Dot) on the Eufy Genie (also positioned near the top) which enable it to cancel out surrounding noise and hear commands clearly. On the back, near the bottom are the two ports you’ll get on the Genie. There’s a 3.5mm AUX port which you can use to connect the Genie to external speakers (Bluetooth support is present as well, by the way), and a microUSB port for supplying power to the speaker. 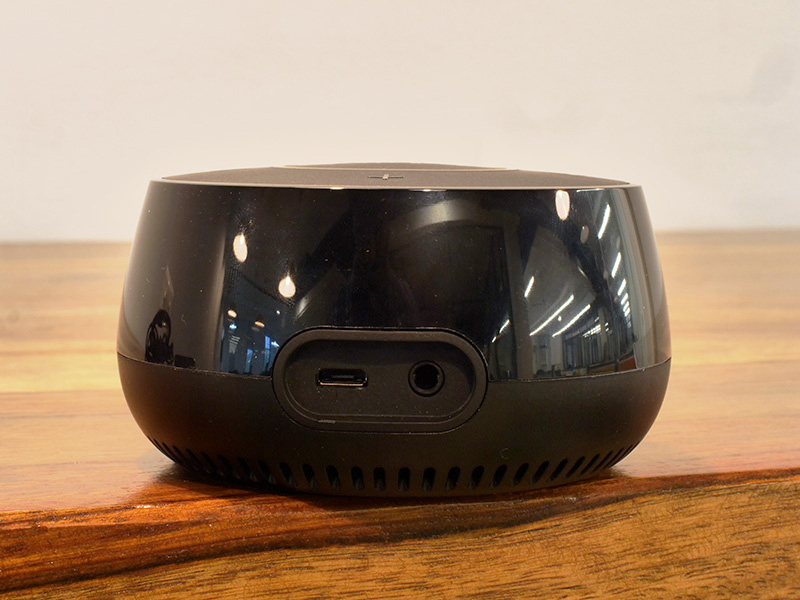 In my half a year or so of using an Echo Dot at home, I’ve come to expect tinny audio from smart speakers of its size. Granted, I was in for a shock when I first heard the audio from the Google Home Mini, but I chalked that up to ‘Google’ and even though I still awe at the audio output from that Home Mini whenever someone prank plays music on it in the middle of the day, I don’t expect such sound from other similarly-sized speakers.

That’s where the Eufy Genie surprised me. It’s from Anker, and while they do make some respectable accessories, I’ve never used an Anker speaker, and I didn’t expect the audio from the Genie to be anything better than the Echo Dot. How very wrong I was. 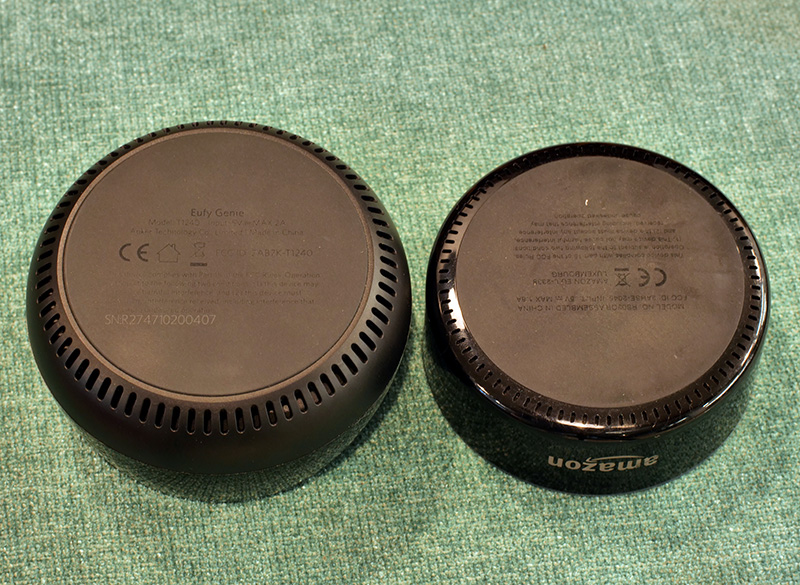 As soon as I was done setting up the speaker I asked it to play ‘Closer by the Chainsmokers’ for no particular reason other than the fact that I can’t quite get over that song for some reason. No sooner had the Genie said ‘Playing Closer by the Chainsmokers’ I cranked up the volume to max and well… let me put it this way, the Eufy Genie can get loud. Like really loud for its size. 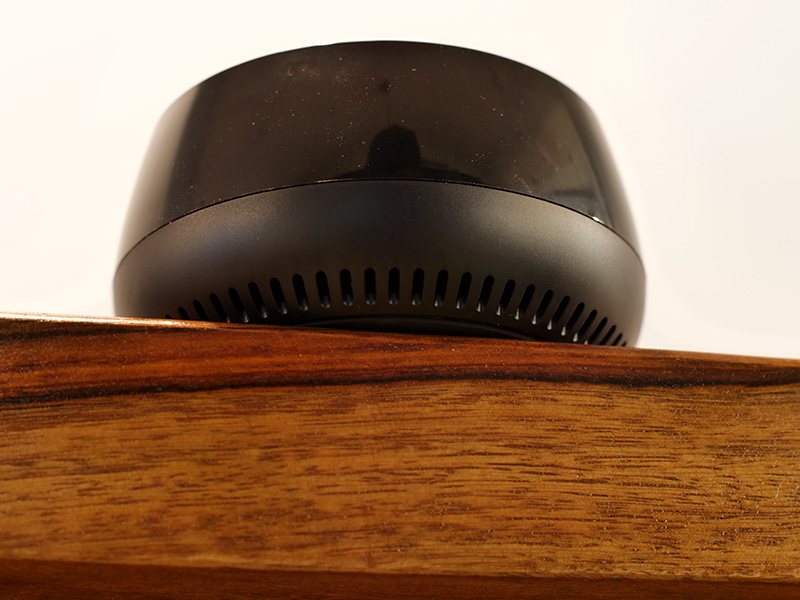 Not just loud, by the way, the Eufy Genie doesn’t lack on bass, mids, or treble either. It’s a perfectly amazing sounding smart speaker for its size, and while its nowhere near the Google Home Mini, it’s miles ahead of the audio the Echo Dot can ever reproduce. 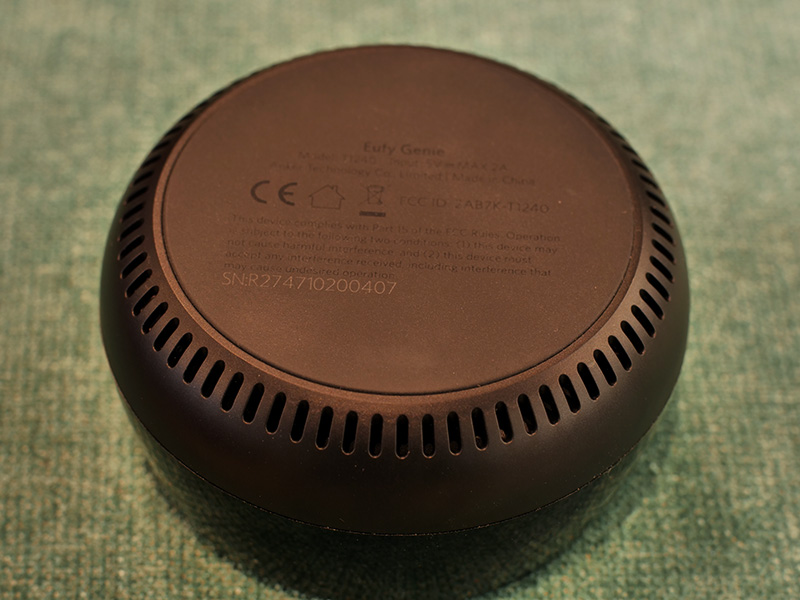 Just to be thorough, I asked the Genie to play a lot more songs. Everything from God’s Plan, to John Denver classics, and the speaker handles everything beautifully. I’m almost tempted to keep it with myself forever.

First things first, when I say ‘user experience’, I mean solely the experience of using the Eufy Genie as my main smart speaker. I’m not discussing the EufyHome app here. This is solely a section dedicated to the things I find awesome on the Eufy Genie, and some things that I need to nitpick about… more or less.

Setting up the Eufy Genie is easy enough, and doesn’t really take a lot of time. Since it’s a third party speaker, you’ll not be able to use the Alexa app to set it up, but setting it up with the EufyHome app is nice and breezy. 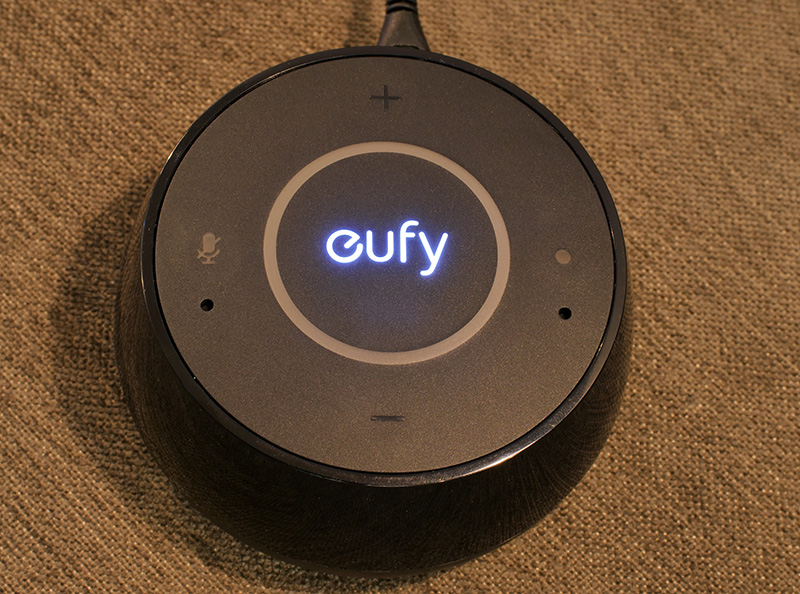 The speaker’s light ring is not nearly as huge as the one on the Echo Dot, and that’s something I actually like. It is, however, as bright as the Echo Dot, and add to that the ‘eufy’ branding on top that lights up as well, and it makes for a speaker that while beautiful, might cause issues if you talk to it in the middle of the night to change the setting on your AC or something. 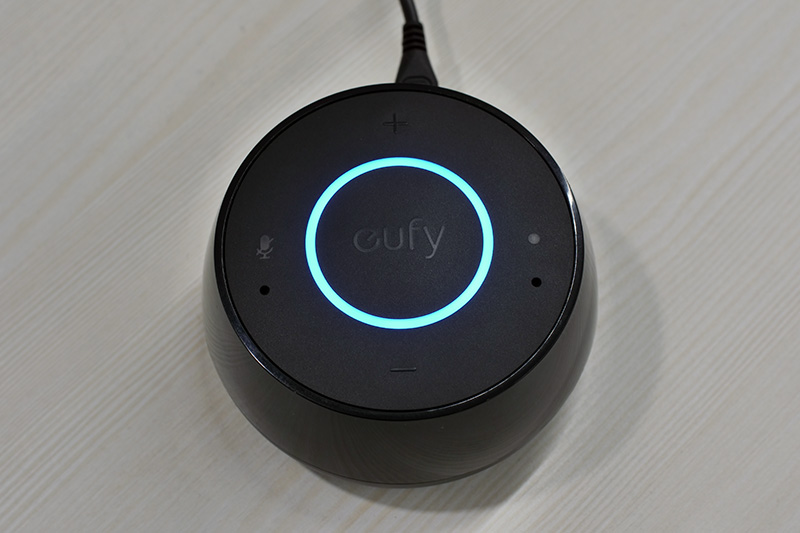 Then come the microphones themselves. While Anker has used far-field microphones on the Eufy Genie, I did notice that they’re not as sensitive to my voice as the Echo Dot. In fact, when playing music, I had to almost shout ‘Alexa’ to get the speaker to hear me talk. Even at a distance, while the Echo Dot has no issues even if I casually say the wake word, the Eufy Genie requires genuine effort to start listening. 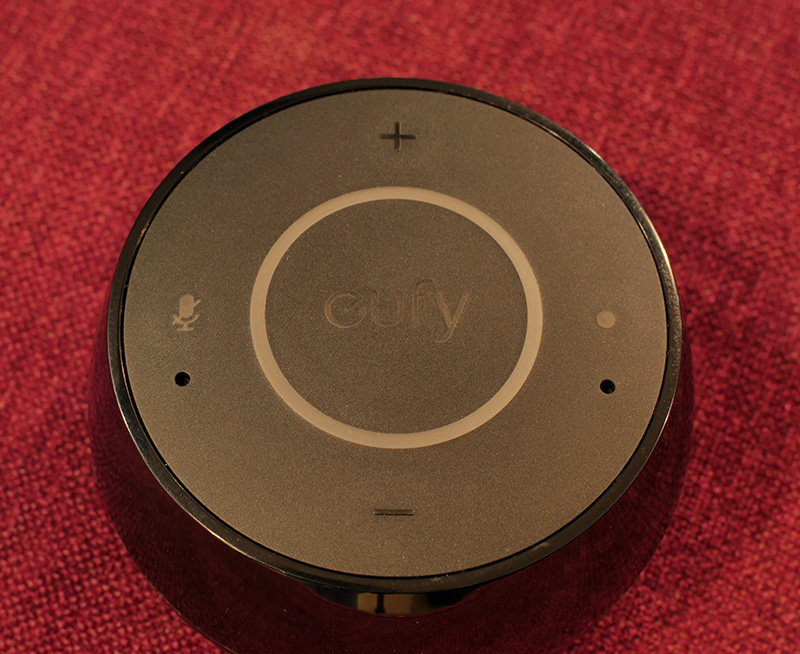 I also noticed something else that struck me as odd. When the Genie does hear my commands, it takes considerably longer than the Echo Dot to actually respond to them. I don’t know why that is, since they’re both using Alexa at the end of the day, but it’s definitely there, and it’s not because of the internet connection because my Echo Dot was connected to the same WiFi network. It’s not a deal breaker, but it’s there for anyone who is like me and gets annoyed at minor things that are really more ‘first world problems’ than anything else.

Since the Eufy Genie uses Alexa, it can do everything your regular Echo, Echo Dot, or Echo Plus will do here in India. It has access to all the same Skills, although you’ll have to enable them from the Alexa app, because the EufyHome app doesn’t let you do that, and it replies in the same Alexa voice that I’m used to hearing anytime I come home and say ‘Alexa, I’m home.’ 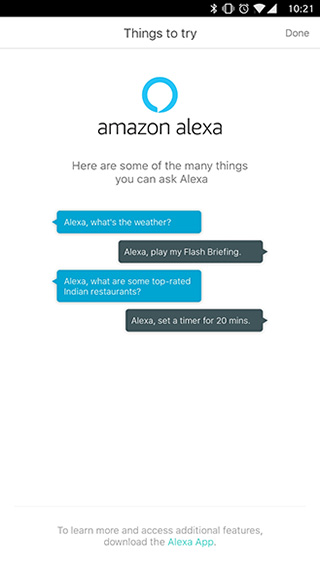 Not one to take things for granted, I did test out the capabilities of the Eufy Genie, and needless to say, it passed with flying colors. It’s capable of presenting a flash briefing, scores for matches, giving me random information that I didn’t really need to know but was wondering about anyway, and a lot more. I mean, it’s basically the Echo Dot, except it looks better, it sounds better, and it hears a little worse. 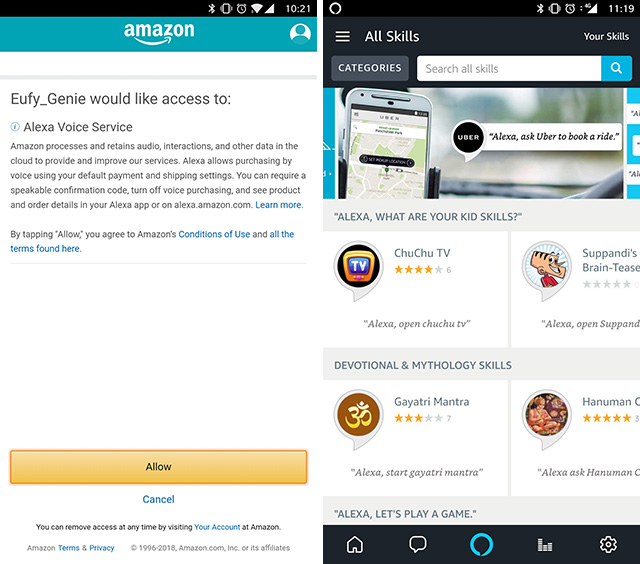 The EufyHome app is actually a pretty well designed app and setting up the Eufy Genie is a straightforward task in it. You simply launch the app, tap on the ‘plus’ icon on the top right and choose ‘Eufy Genie’ from the next screen. 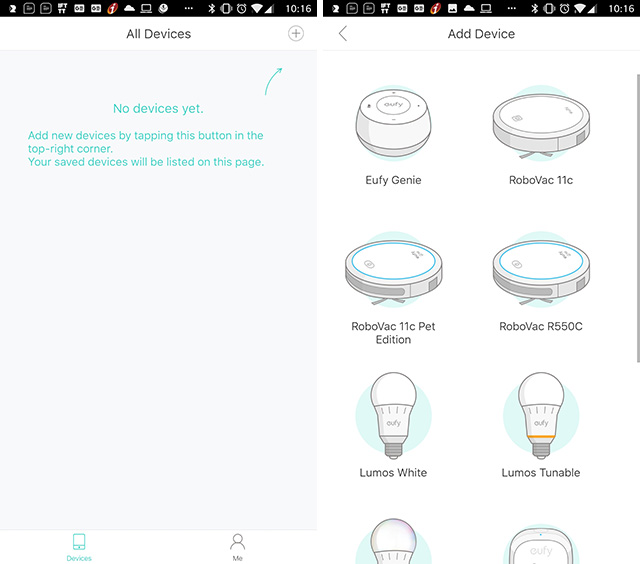 Once you’ve done that, it’s a simple matter of connecting the Eufy Genie to your WiFi network and logging in with your Amazon account to let it use Alexa. Keep in mind though, that while the Echo Dot supports both 2.4GHz and 5GHz networks, the Eufy Genie only supports 2.4GHz networks. It shouldn’t make much of a difference for the most part, but if you’re trying to shift all your devices to the 5GHz frequency, the Eufy Genie is not the smart speaker you’re looking for.

The Eufy Genie is definitely a pretty impressive budget smart speaker. However, it does have its own set of pros and cons:

All things considered, the Eufy Genie smart speaker is quite possibly the best budget smart speaker out there right now. True the Home Mini is better in many ways, but it’s also more expensive, and the Echo Dot has a poorer design, sounds worse, and is just not as good over all as the Eufy Genie.

At Rs. 2,199 (as of this writing), the Eufy Genie is definitely a smart speaker worth looking into. The pricing on Amazon fluctuates sometimes and you might find it priced around Rs. 3,999 as well; however, even then this is a much better option to go with as compared to the Amazon Echo Dot.