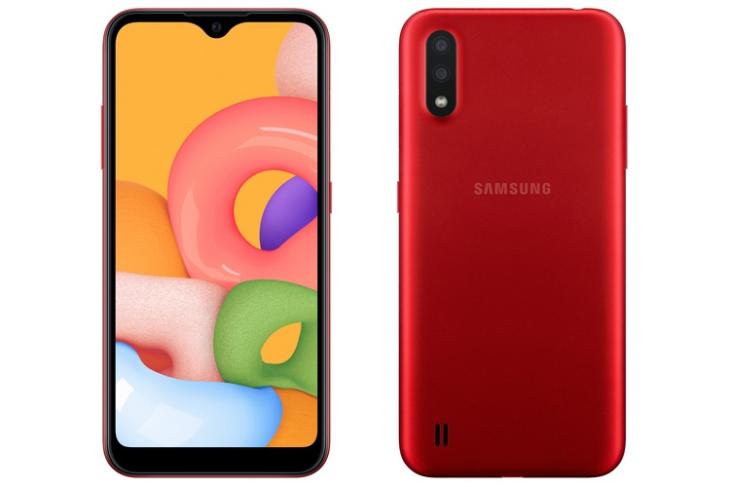 Samsung has just taken the wraps off of a new Galaxy A-series smartphone that promises to be one of its next entry-level offerings. Listed Tuesday on the official Samsung Press site, the Galaxy A01 offers 6GB/ 8GB of RAM and up to 128GB of internal storage with a microSD card slot, potentially making it an interesting proposition if priced right.

The rest of the tech specs include a 5.7-inch HD+ Infinity-V display with a teardrop notch and an unidentified octa-core CPU clocked at up to 1.95GHz. The phone also comes with a 3,000mAh battery, dual-SIM slots and an FM Radio receiver. The Galaxy A01 will ship with a dual-camera setup on the back, including a 13MP main camera with an f/2.2 lens and a 2MP secondary shooter with an f/2.4 lens. It will also have a 5MP f/2.0 camera for selfies and video chats.

On-board sensors include a proximity sensor, a light sensor and an accelerometer. No other sensors, including the all-important gyroscope, are listed on the official spec-sheet, which might be an indication that Samsung is getting back to its old bad habits of leaving out important hardware to cut costs and/or artificially differentiating between its offerings at the mid-range and entry-level.

That particular strategy backfired badly with the catastrophic failure of the Galaxy J-series, so one would hope that the company would not jeopardize the success of its Galaxy A lineup by going back to its old ways. Either way, Samsung is yet to announce either the pricing or availability of the new device, but we expect it to be launched in India at some stage, so we’ll definitely hear more on the subject in the days ahead.