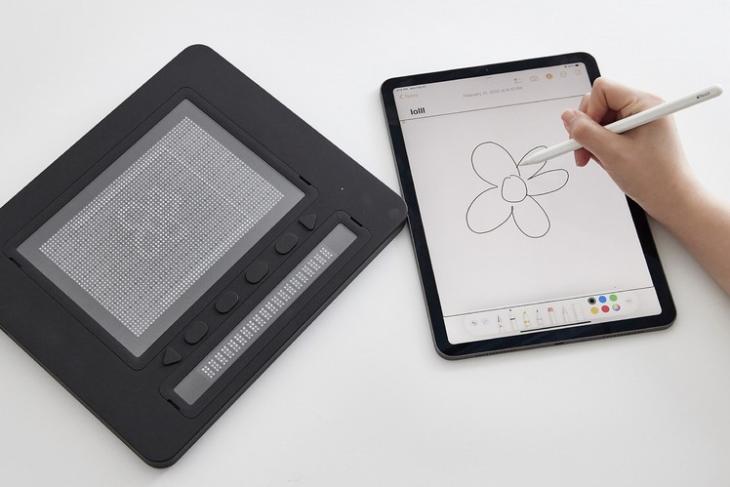 Over the past few years, we have seen many companies like Google, IBM, and individual researchers come up with innovative devices and services to help the visually impaired. However, there aren’t many devices that help blind and visually impaired people interact with digital devices, though Google has tried to implement a Braille keyboard on Android in the past. Now, a Korean company has developed a tactile display that enables blind and visually-impaired individuals to touch and feel digital images and texts.

Developed by a Korea-based tactile communication-focused company named Dot, the Dot Pad is a unique tactile display that helps blind and/ or visually-impaired people touch digital images and texts and feel them in the real world. It aims to help the visually disabled population access educational and communication content more easily than ever.

The Dot Pad is an advanced braille-reading display that relies on 2,400 movable pins, arranged in a specific manner. These pins rely on special actuators, similar to those in smartphone speakers, that can easily move these pins up or down to form texts and images. Using these dynamic pins that are meticulously set to represent texts as well as images in braille, the Dot Pad can generate 300 braille glyphs and 20 more using an additional line below the main display area.

“In the 21st century, it didn’t make sense that visually impaired people cannot access graphical information in a digital way,” said Ki Kwang Sung, the co-founder of Dot. “There are a lot of innovations out there in every industry, including education, jobs and social network services… the requirement of graphical information is getting higher, which means visually impaired people are getting cut off,” Sung further added.

So, the Dot Pad is being termed as an essential device for visually-impaired kids and a “potential game-changing addition” to the K-12 education in the blind community. Furthermore, the company is now working on various new features that will allow the device to better represent images. Plus, it is working on a way to lock the pins in a middle position to represent depths and slopes in images.

Furthermore, Sung said that during the testing, the feedback from the blind community has been positive. The co-founder mentioned that Dot is currently working with the Korean as well as the US governments to integrate the Dot Pad into their education sector and leverage existing educational funds and subsidy methods to fund their project. The developers, on the other hand, can learn more about the tactile graphics API from here and Apple’s developer site to develop more braille-based features for the Dot Pad, going forward.